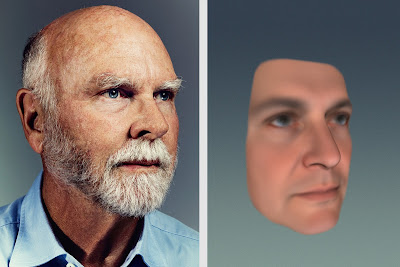 This WIRED article profiles Human Longevity, Inc., a genomics and machine learning startup led by Craig Venter. Its stated goal is to sequence 1 million people in the next few years.

The figure above is an example of facial morphology prediction from DNA. Face recognition algorithms decompose a given face into a finite feature set (e.g., coefficients of eigen-faces). As we know from looking at identical twins, these coefficients are highly heritable, and hence can be predicted from genomic data.

WIRED: … “From just the fingerprint on your pen, we can sequence your genome and identify how you look,” Venter explains. “It’s good enough to pick someone out of a ten-person line-up and it’s getting better all the time.” These prediction algorithms were developed at Venter’s latest venture, biosciences startup Human Longevity, Inc (HLi) by measuring 30,000 datapoints from across the faces of a thousand volunteers, then using machine learning to identify patterns between their facial morphology and their entire genetic code. “We could take foetal cells from a mother’s bloodstream, sequence the genome and give her a picture of what her future child will look like at 18,” he says.

HLi’s sequencing and phenotyping are done in San Diego, but the machine learning group hangs out at this third wave cafe in Mountain View :-)

I gave this talk there last year.