Asian carp has been a tremendous issue for the State of Michigan over the past decade. The Federal Government recently announced a plan (link is external) to spend $57.3 million dollars in 2016 to stop the threat of the invasive aquatic species to the Great Lakes. The plans call for the construction of physical fish barriers at particular choke points, as well as in depth studies of where Asian Carp are at various points in their life cycle, to ensure the best way to stop the threat. Michigan lawmakers are at odds about the best way to prevent the carp from wreaking havoc in the great lakes, but agree (for once) on the necessity to do something. (link is external) 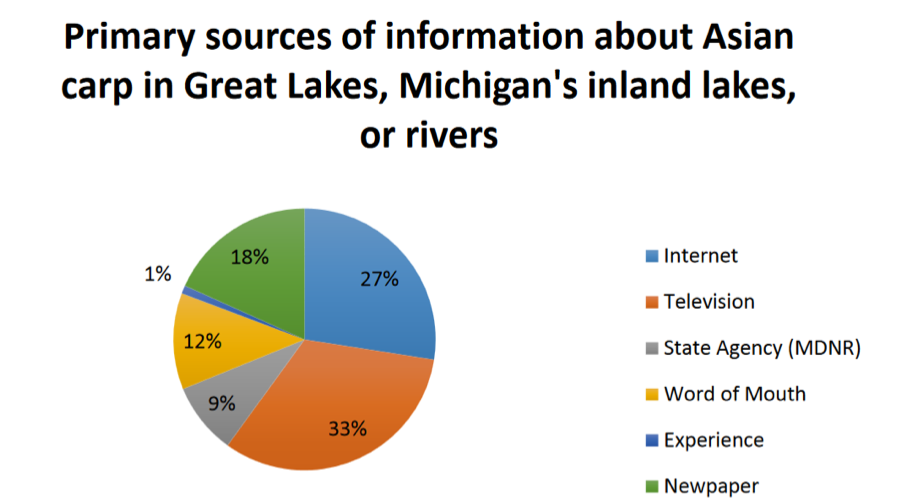 Missed in much of this debate is the responsibility of Michiganders. Knowing how to best mobilize Michigan residents to help prevent the spread of Asian carp, first starts with identifying Michigan resident’s current beliefs and thoughts on the species. This is precisely what a Michigan Applied Public Policy Research paper sought to do. A comprehensive survey was undertaken, scientifically polling Michigan residents from across the State, and the results were mixed: most Michigan residents get their information about Asian carp from television, with internet coming in at a close second, and experience coming in last. Further, the paper, released in 2015, looks at Michigan residents’ risk perceptions and public support for various aquatic invasive species. Most residents viewed the risk as generally high. Questions were also asked about how willing an individual would be to take no action, catch and release a carp elsewhere, or call authorities to file a report, set up a physical barrier or lethally poison the fish. The paper can be viewed, in full, on IPPSR’s website, or by clicking here.

So what do these results mean for those wishing to influence the debate around Asian carp? For starters, most Michigan residents have had no experience with the fish, but rather, have gained their information through television and the internet. This is important for legislators to recognize that few residents have actually dealt with the Carp. Further, the mixed reactions towards the various plans to remove the carp are indicative of a populace that has little information or knowledge regarding the invasive species, and the best way to eliminate the population in the Great Lakes. Therefore, an intelligent legislator, or advocacy group would first seek to educate Michigan residents about the best way to deal with Asian carp, and then focus on promoting the plan to remove the aquatic nuisance.