The study outlined here began with a question heard many times while working with the city’s finance department. That question was: If people don’t think they get enough from the city, why should they pay their taxes? That is a difficult one to answer, but first a little background.

In Detroit, income taxes suffer low levels of compliance, for example, the population sampled here suggests that about 63% of people fully complied with their income taxes. The State has begun to facilitate this process by hosting an online payment system for the city. 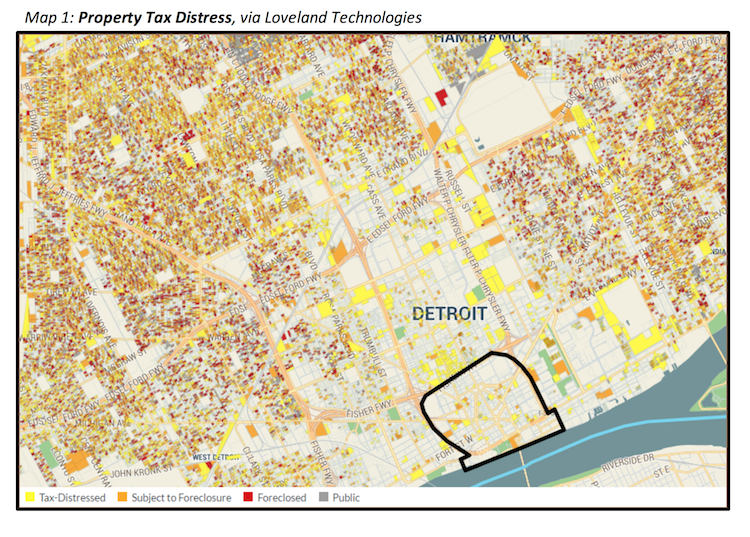 While many writers and researchers still regard property taxes as a mainstay for municipal finances[1], they are already a less stable choice for Detroit. In looking Map 1 on the left, we can see how dire the property tax situation is. This shows tax-distressed properties in Detroit, and outlines the downtown area in black. We can see that this neighborhood and Midtown to the north have some of the fewest distressed properties. The most recent public information, hosted by Loveland Technologies, shows that $408,261,618 is currently owed to Detroit from overdue property taxes and penalties which has led to over 70,000 foreclosure proceedings.

An alternative, the city income tax, has been available to Detroit since 1962[2]. This however is subject to a higher degree of personal preference in how to pay these taxes. Poor services are generally accepted to affect people’s willingness to pay their taxes by way of a “psychological contract”[3], reciprocal tendencies of individuals to their community[4], as well as to the environment as affected by their local government. This would include items such as clean streets, working streetlights, and other things that can be seen plainly and are based in public services.

To test this service to tax compliance link, Public Transit was used. That area experienced a reduction in service during the 2011 to 2012 study period. The variance and visibility imparted here allows a quantifiable test to be conducted. 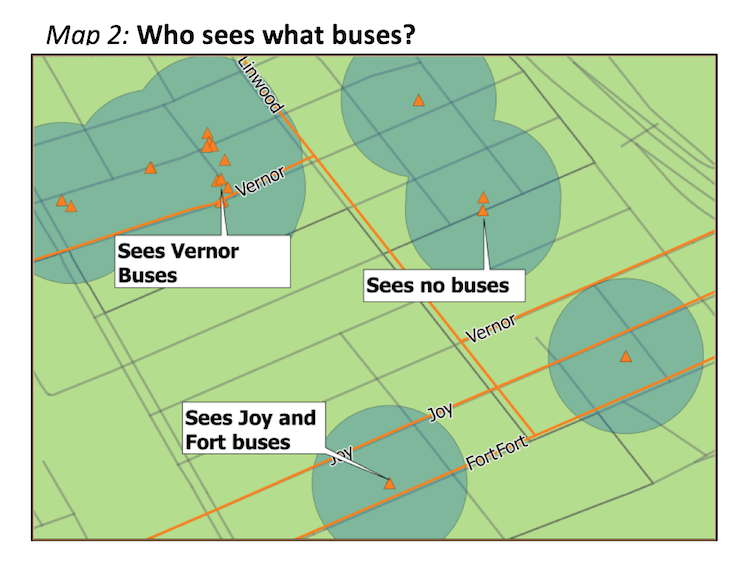 To build this study, multiple databases were used to construct individual environments. The most notable of these sources was Detroit’s CityTax database, which gives actual data on individual’s compliance characteristics. To build the individual’s environment comprehensive data were spatially joined into the census tract level, and 500 foot buffers were created around each individual to measure the visibility of transit services.  Map 2 on the right shows each individual and their buffer in relation to the closest bus routes (lines in orange) which were quantified by the average number of daily buses that intersect the buffer of each individual’s home.

What is found is that there is a statistically significant and positive link between the individual’s choice to pay their taxes and the average number of daily bus passes. This holds true even while controlling for the local culture of tax compliance. When looking into group effects, it is found that the number of bus passes; measures of area wealth, population density all had positive effects on the area’s compliance, but the number of units in the areas buildings had a negative effect on an area’s compliance. To quantify this suppose, 100,000 people live within 500 feet of a bus route. Based on this analysis it is expected that a system-wide increase of one percent in average passes would result in 6,000 more people paying their income taxes, ceteris paribus.

Visible services serve to instill confidence in local governance, despite the absence of evidence that service is run well. This is prospective research that tests visual indication of service. It should be apparent that actual usage or knowledge of how to use services will result in higher levels of tax compliance. Accessibility to desired locations as provided by transit is expected to have a much larger impact on income tax compliance.

In short it was found here that reductions in service would lead to reductions in an individual’s likelihood to pay their income when using transit as a model. This was tested purely on the visible level. More importantly and conversely, increases in transit services are expected to make it more likely that a person will pay their income taxes, whether or not that service is being used by the individual in question.

This analysis offers officials in Detroit a method by which they can test service changes and understand whether to expect a decrease in income tax revenue from the switch, the first recommendation is to facilitate inter-agency communication. To build on this Detroit’s financial department could take on a role where they evaluate prospective changes and judge what effect, if any it will have on the cities revenue streams. The key here is to increase and solidify legally owed revenues in the form of income taxes.

A second recommendation has to do with regional transportation. Luckily enough there is legislation moving through the Michigan House to define the Regional Transit Authority tax-levying abilities for the four counties it oversees. Their duty will be to coordinate existing transit, avoid duplication of service, and provide rapid transit to Southeast Michigan. Those new services will give residents in Detroit and the entire area higher levels of accessibility, and therefore real value in complying with tax payments.

[3] Tax compliance as the result of a psychological tax contract: The role of incentives and responsive regulation. Lars & Frey 2007

[4] The logic of reciprocity: trust, collective action, and law. Kahan 2003

Sean Tobin is a 2012 graduate of Michigan State University with a major in political science and minor in economics. He entered the MPP Program in the fall of 2014. Sean's policy interests include international transportation policy and his topics of research will include the use of public private partnerships to fund domestic projects in the promotion of trade. Prior to entering the MPP program, Sean interned and worked at various public relations firms to promote economic development. Sean is originally from Miami, Florida and in his spare time enjoys outdoor adventures, cooking and tinkering with old and new forms of technology. He expects to complete the MPP Program in the spring of 2016 and hopes to promote key issues by doing research with a think tank.