Spring classes have ended, thousands of people have graduated, and a relative calm has spread over the campus. While many people kick back and relax over their summer vacation, this is the busy season for us here at CAP. During the summer we’re busy excavating, researching, and conducting lab work. It may seem like much of our work is tied to campus construction (which does take up a chunk of our summers), but there’s so much more that we do. The construction job monitoring, shovel test pits, pedestrian surveys, and research fuels many of our projects all year long. It’s also the time when we put much of the research our CAP graduate fellows have been working on to the test.

The past three weeks we have been excavating and surveying the Abbot Entrance area ahead of the landscaping rejuvenation project that began on the 25th. I talked about a bit of the history of the Abbot Road entrance in my post about the campus streetcar. We knew that we were going to be working in the area of several historic buildings, namely Faculty Row House #6, Station Terrace, the Y.M.C.A. (formerly the campus hospital), and the U.S. Weather Bureau. We still have more work to do in the area in the coming weeks, but we have uncovered some exciting things since work began!

Our first area of priority was the sidewalk realignment at the southwest corner of Abbot Road and West Circle Drive. Although we didn’t encounter anything related to the structure of Faculty Row House #6, or the Old Trolley waiting room, we did locate an old sidewalk. Now I know what you’re thinking, a sidewalk, big deal! But this is still a part of the historic campus landscape. Artifacts near the sidewalk, including a carbon battery rod, pipe stem, butchered animal bone, and ceramics indicate an early 1900s date. Part of the sidewalk was removed and is being sent to the Civil Engineering department for testing. This will help them to understand changes in cement/concrete technology over time. 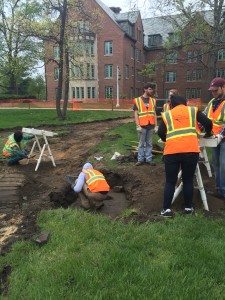 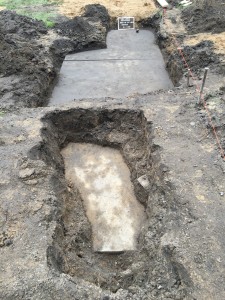 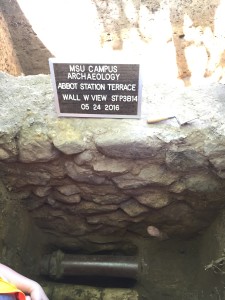 Next we moved to the Abbot entrance median. Landscape services planned to remove diseased non-native trees, and return the area to a more historically accurate planting scheme. Following what has become a yearly tradition, we found a building, Station Terrace to be exact! Our final shovel test pit for the median located the top of a stone and mortar wall. We believe this to be a basement interior-dividing wall. On the east side of the wall were two large decommissioned pipes, as well as two layers of charcoal and debris. The east unit’s stratigraphy was not disturbed at all, so these pipes appear to be original to the building, or at least installed before the foundation was filled in after the building was moved in 1925. To the west of the wall was a layer of larger boulders covering a poured concrete floor. I believe that the boulders were added as fill. Although we only opened a small area we found many wonderful artifacts, including a complete waterman’s ink bottle, a complete Sanford Library Paste jar (used to mount photographs), and a pair of shoes! 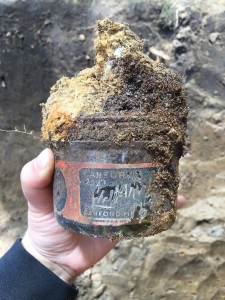 Additional investigation into this area, at some time in the future, will be necessary to determine how much of the building currently exists subsurface. Although Station Terrace appears on several maps, some of the older ones are not the most spatially accurate, and the surrounding landscape is drastically changed today. However, one 1926 map has the beginning of the north and south bound lanes of Abbot, leading me to believe that the eastern third of the building lies under the media, with the rest is under the road and west Abbot sidewalk area. 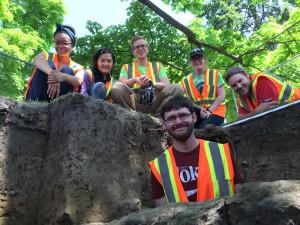 Next week we will be continuing exploration of the Abbot road entrance, focusing on the northwest corner where the U.S. Weather Bureau stood from 1910-1948. Stay tuned for updates, and follow us on Twitter and Instragram (@capmsu) for updates from the field!