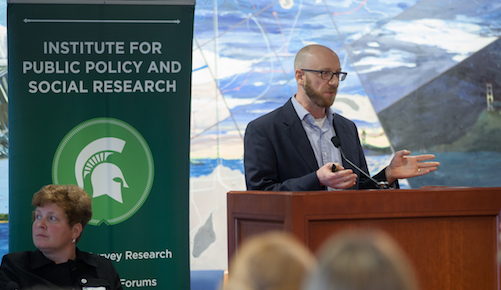 Fabiola Yanez: At the IPPSR forum, you focused a lot on the Clean Power Plan, the options for cutting emissions include investing in renewable energy, energy efficiency, natural gas, nuclear power and shifting away from coal-fired power. Now this obviously varies across states and states are free to combine options to meet their targets. Which options do you think will be the lowest cost or more efficient for Michigan to reduce emissions?

Soren Anderson: It is possible that there could be all of those options for Michigan. We can definitely do some renewables at a low cost like wind power and biomass. We are already seeing a great transition into natural gas because of it’s low cost, but some things we can do with existing generators is operate them more efficiently. Instead of using, for example, 80% of raw energy in converting that to electricity you can make changes to the facilities and have a higher conversion from coal or natural gas to reusable electricity. Another option is running natural gas generators more often and having coal as a back up when demand is high. Then you can actually do retiring coal plants or convert them to natural gas. These are some of the options, but it would make sense for Michigan to do all of them.

FY: Some of the policies you mentioned to reduce carbon emissions was a direct tax on carbon or a cap and trade. There are some arguments that a domestic carbon tax will force industries to leave America because it will drive up the cost of natural gas. Chemical companies would mostly be effected because of their use of natural gas as an energy source. What would be your counter argument?

SA: This would be a real concern if you had an incomplete regulation. So if you are regulating some sectors of the economy but not others or if you are regulating some states and not all states, a carbon tax or cap and trade will increase the cost of producing goods that uses fossil fuels or generates emissions. With electricity it is not really a concern because you can’t build a transition line, for example in China and have china produce our electricity. One approach is if you are going to unilaterally regulate carbon then it would make sense to do that on industries that are less sensitive to trade so electricity may be one or transportation in the United States. We can tax gasoline or other transportation fuels. This would less likely be exposed to trade since you cant buy gasoline services somewhere else. Once you start to get to commodities and manufacture goods then it becomes more complicated like cement or concrete. Those have to be produced locally because the cost of transportation is so high. So overall we need to think about what sectors we are regulating and if we are regulating them differently, especially those that are more sensitive to trade. 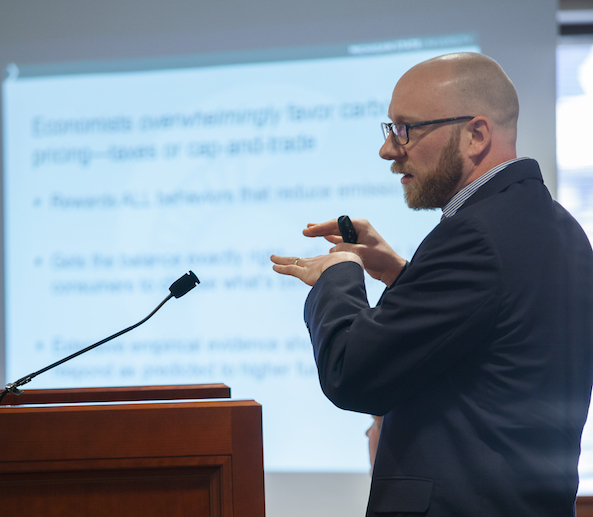 FY: Are there any other countries that have passed something similar to the clean power plan? If so, can we adopt some of those policies here in Michigan?

SA: Europe has a cap and trade system for carbon. Many countries have standards and regulations like renewable energy standards and fuel economy standards for cars. We don’t have to go very far to learn certain policies when here in the U.S, California has a cap and trade program. There is a lot of issues on how you design that system like what sectors do you regulate?, how many permits do you issue?, how do you issue the permits?, do you make the permits bankable? What do you do to facilitate a good market for trading? Do you make it easy or hard for people to trade permits with each other and if you want to make it easier how do you do that? Even though it is a difficult system to design it would still be smart for Michigan to study the program, learn from it, and try to implement it.

FY: We can all agree that the more information we know on the effects of our behavior the more changes we can make in our daily lives. How can we help consumers know how much energy they are using and what changes can they make to conserve energy?

SA: One thing we have a lot of is energy labeling on appliances that inform the consumer how much energy they are using and the cost. The issue with these labels is it can distort peoples perception. An example, is cars and the label of miles per gallon instead of gallons per mile. What matters for fuel savings is not miles per gallon, but gallons per mile. This is know as the MPG illusion. Another issue is the energy labels on appliances have a one size fits all for everyone in the country. For example, a sears in Michigan will claim a washer uses 27 dollars of energy per year, then you go to California and the same 27 dollars of energy per year is being claim even though electricity prices in those places can be very different. Giving people state specific information about their energy cost can actually matter. We have labels, but they can be better. The other thing is for electricity, many people don’t understand how to read their bill and they may not understand how much energy the their house appliances use. One idea is creating technological products that can help consumers get better information such as a displays in their homes that tell them how much electricity they are using.

FY: Do any of the presidential candidates plan on clean energy align with your views?

SA: Bernie Sanders is proposing a carbon tax. Assuming that we do want to reduce carbon emissions then that’s a good thing. To some degree, the idea of regulating carbon emissions because it is an intergenerational problem and almost ethical, depending on what climate model, some show that the damages can be very big in the short run and others show that most of the damages can happen in the distant future and so its more of an ethical choice on what we want to leave our future generations. The issue with Bernie is that he has a carbon tax on his proposal, but also many other things and an economist would say that if you do a carbon tax correctly then you don’t need any other regulations.

Fabiola Yanez is an undergraduate political science student who is interested in technology and innovation policies. She has worked on consumer privacy, cybersecurity, and international digital trade at the Interactive Advertising Bureau in Washington D.C. At IPPSR, she will be working on technology and energy policies for an online database and blog.