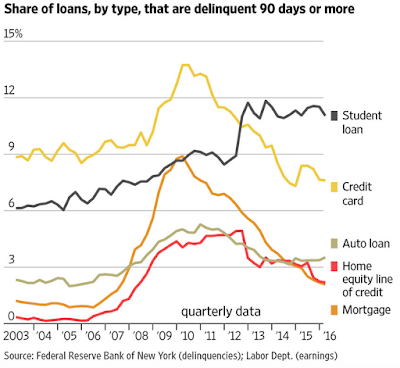 See also When everyone goes to college: a lesson from S. Korea. Returns to a “college education” are highly dependent on the intrinsic cognitive ability and work ethic of the individual.

The U.S. government over the last 15 years made a trillion-dollar investment to improve the nation’s workforce, productivity and economy. A big portion of that investment has now turned toxic, with echoes of the housing crisis.

The investment was in “human capital,” or, more specifically, higher education. The government helped finance tens of millions of tuitions as enrollment in U.S. colleges and graduate schools soared 24% from 2002 to 2012, rivaling the higher-education boom of the 1970s. Millions of others attended trade schools that award career certificates.

The government financed a large share of these educations through grants, low-interest loans and loan guarantees. Total outstanding student debt—almost all guaranteed or made directly by the federal government—has quadrupled since 2000 to $1.2 trillion today. The government also spent tens of billions of dollars in grants and tax credits for students.

New research shows a significant chunk of that investment backfired, with millions of students worse off for having gone to school. Many never learned new skills because they dropped out—and now carry debt they are unwilling or unable to repay.

… nonprofit colleges, which enroll about 2.7 million students a year. A report released in May by Third Way, a nonpartisan think tank, revealed that among students who enrolled in 2005, on average only half graduated from such institutions within six years. On average, nearly four in 10 undergraduates at those schools who took on student debt earned no more than $25,000 in 2011, the same as the typical high-school graduate. …