All of these articles fail to take into account the context surrounding the switch. Further, the media narrative surrounding the crisis has reinforced itself, with reporters looking for proof regarding certain elements of the Crisis, and taking that evidence to reinforce their initial thought. What report after report fails to take into account is the context surrounding the switch. The ‘reader’s digest’ version of the real story: The State of Michigan OK’d the City of Flint’s existing plans to switch to the KWA water system in order to preserve local autonomy; the cost savings offered by such a switch were questionable.  Until the narrative surrounding the Water Crisis takes into account the context, particularly that of the local political situation at the time of the switch, and the failed policies that lead to the decision, we cannot hope to correct and prevent a similar incident in the future.

This work stems from a research project I have been working on for the past three plus years, examining the relationship between the State of Michigan and its municipalities. I’ve already covered one part of the research for the Michigan Policy Wonk Blog, which was undertaken in conjunction with the research, but also for my Master’s Capstone, if you’re interest in the poster version it can be found here (link is external).  For the project, I conducted in depth interviews with actors at all levels of government: local elected officials from the City of Flint, Past/Current State Treasurers and Deputy Treasurers, and almost every actor within the Michigan Department of Treasury’s department that handles State interventions into local financial emergencies, and high level actors and executives in Governor Rick Snyder’s office. To summarize the work, it concluded that the Flint Water Crisis was an outgrowth of the poor relationship between the State of Michigan and its cities, as well as a complete failure of Public Act 436, the emergency manager law. What is particularly peculiar surrounding the Crisis is the State of Michigan’s actions surrounding the water switch. PA 436, the Emergency Manager Law, completely removes local elected officials from power.  Therefore, it is surprising that the State of Michigan took a multitude of actions to preserve the political autonomy of the City government when considering the water switch. This relationship during the intervention highlights the flaws within PA 436.

First, a brief history of the City of Flint’s water source; the City of Flint has received its water from the Detroit Water & Sewer Department (DWSD) for around 60 years. One reason it was particularly expensive for the City of Flint is the change in elevation between Flint and Detroit. As a result, Flint’s water rates have been historically high. As early as 2006 the City of Flint was looking into different water sources for the City. (link is external) The Karegnondi Water Authority was created in 2007 (link is external), spearheaded by Gennesee County Drain Commissioner Jeff Wright.  Flint Mayor Dayne Walling was elected chairman of the board for the KWA, before a State appointed emergency manager was installed in the City. Mayor Walling even took part in the initial ceremony for the pipeline.

The contentious relationship between the City of Flint and DWSD is well documented (link is external), with the DWSD even calling it the States ‘Water War’ (link is external). The reasons behind the conflict are simple: DWSD was increasing rates to supply its water to the City of Flint, and the City of Flint had no say in these rates, and often thought they were subjective and unreasonably high. The actual rate making process that DWSD uses is unclear as well. As one elected official put it, “A guy in a backroom at DWSD makes up the rates and that’s what they charge”  In short, the City of Flint had no seat at the table within DWSD, while they were main players in the KWA, and would be able to ‘call the shots’ for the water authority. Therefore, the City of Flint’s desire to switch to the KWA as opposed to the DWSD was about preserving their local political autonomy, where they would have a say in their water process.

The State, through PA 436 of 2012, appointed an emergency manager in the City of Flint. Under the law, the emergency manager is charged with financial oversight of a city or school district.  When the State of Michigan took over the day to day, as well as long term operations of the City of Flint, they began to examine the water issue. After initial proposals and requests, the Emergency Manager eventually signed off on the water switch to the KWA. City council officials also backed the decision to switch the water source. (link is external) The vote was largely ceremonial, as local elected officials had no formal powers at the time under PA 436, but it was indicative of their desire to see through the switch to the KWA. What is not clear at this point is who signed off on the plan to use the Flint River as an interim water source, as the KWA would not be able to supply water to the City of Flint until 2017 at the earliest. It is this decision that ultimately led to the Flint Water Crisis, not the decision to switch to the KWA. Further, there were conflicting reports regarding this issue. When I spoke with local elected officials, they indicated they were shocked by the interim switch to the Flint River, and that the Treasury Department, and the Governor’s office made this switch without the city council being aware. However, in conversations with high level officials at the Governor’s office, they stated the opposite, with strong language indicating that local elected officials were indeed aware of the plans for the temporary use of the Flint River. 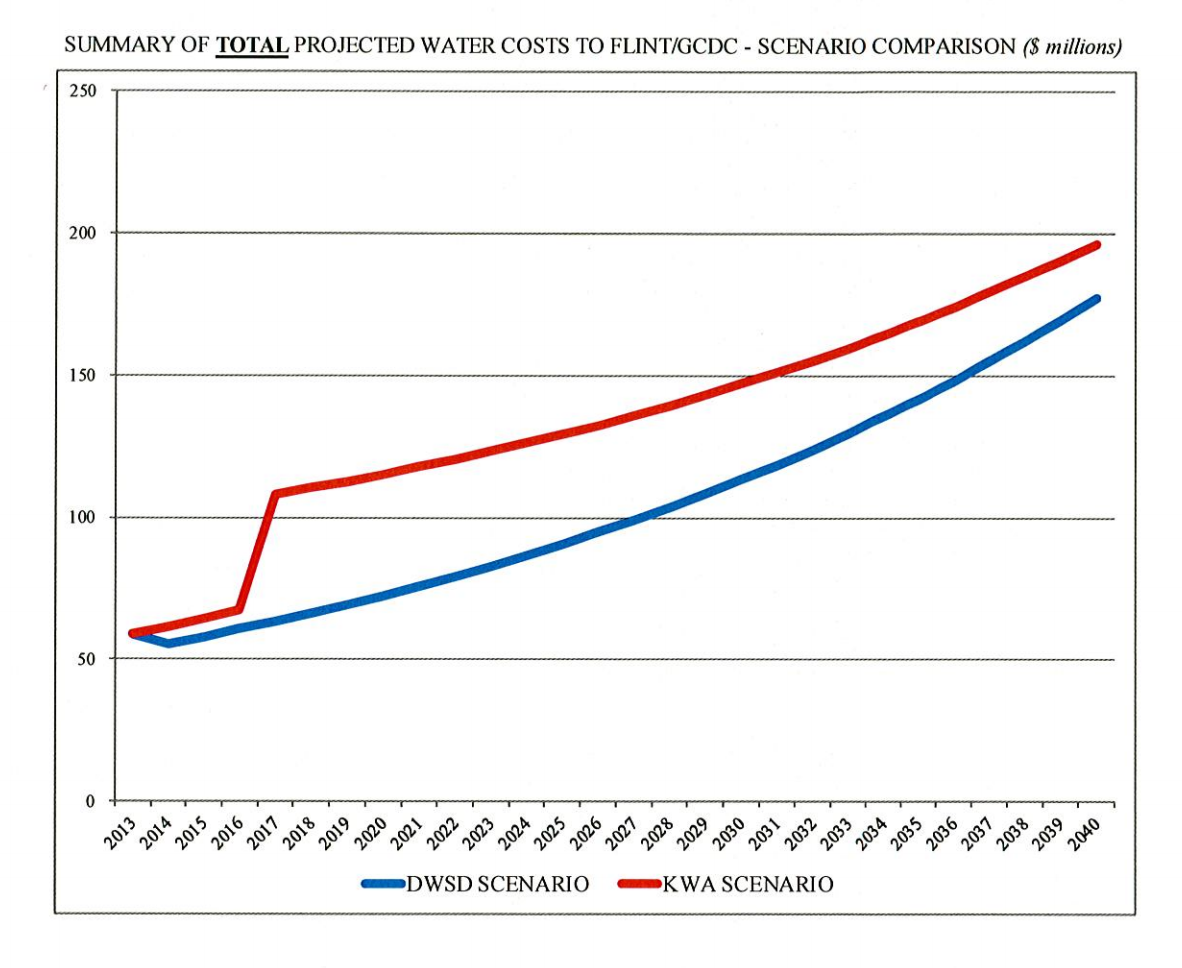 Local elected officials acknowledged that there were questionable short term cost savings for the City of Flint in making the switch. However, they did state that their main concern was although DWSD offered that rate in the first year, there was concern that rate would rise in later years, as the price was not locked in. Therefore, it was not an issue of short term cost savings that motivated the State of Michigan, via the emergency manager, to switch to the KWA. Rather, State officials used the possibility of short term and long term cost savings as a way to justify the switch. The narrative that the State of Michigan forced the City of Flint to switch its water source to save a quick buck is just not the case. While there is significant evidence to support the fact that the State of Michigan believed the switch should save money for the City, that was not the driving force behind the decision.

“We wanted the City of Flint to be drivers of their own destiny” said a high level State Treasury Department official, who signed off on the switch. This desire to preserve local autonomy for the City of Flint is peculiar, to say the least, considering the approach taken by the Treasury Department towards the City under PA 436. The underlying theory of PA 436 is to remove local elected officials, who are unable to make financially difficult decisions. A State appointed emergency manager is then able to provide the necessary political cover to make the difficult financial decisions. Yet at the same time the State of Michigan was attempting to preserve the political power of local elected officials in Flint to make decisions in the future. It is this decision, which runs counter to the entire theory of the law which must be examined.