As the recall for products linked to sunflower seeds potentially contaminated with Listeria grows, I think this is a good time to talk about recalls. I feel like this is a bug I’m hearing more and more about in the news, and have sometimes wondered if it’s just me being more attentive to food safety stories, if it’s the media being more opportunistic about reporting food safety stories, if there’s really more outbreaks happening, or if it’s that we’re getting better at detecting outbreaks. It turns out that a lot of it is that food scientists and regulators are getting really good at detecting outbreaks.
Listeria only affects a small percentage of the population, and has very long incubation periods (up to 60 days), and harbors and grows in cool, moist environments. Outbreaks may consist of a number of sporadic illnesses over a long period of time, and it can be difficult to do the traceback to figure out what the common food is that all the victims have eaten. For instance, the outbreak that Blue Bell is being investigated for involved 10 illnesses and three deaths over the course of four years.
This make it difficult to detect when a real outbreak connected to a particular food is happening or when there is a just a random collection of illnesses happening coincidentally at the same time.
At a talk at the Food Safety Summit, Dr. Wiedmann of Cornell University[1] demonstrated this issue using data from an outbreak in 1997 to 1999. The slide below shows that if you can fingerprint the strains, you can see which are all the same (and therefore possibly from the same food) and which are all different and so presumably not from the same food source. 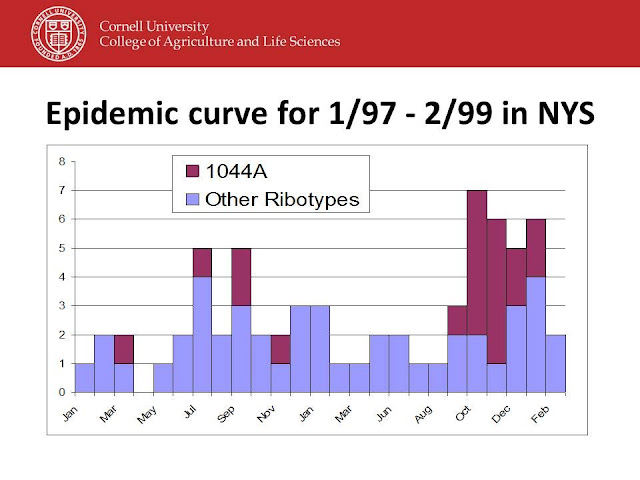 Listeria is an extreme example, but similar characteristics of most foodborne illnesses make them difficult to detect. Given the variety of foods that people eat in any given day and that once an outbreak is detected most of the food has been eaten or thrown away, it is very difficult to identify the common cause of illnesses. Further, it historically made it even more difficult to hold companies accountable because of the legal standards for liability.
But today, the cost of whole genome sequencing (WGS) is plummeting, which allows significantly more accurate identification of which strain of a microbe caused a particular individual’s illness. Once listeria is positively connected to a food, regulators can go back and sequence the genome of strains isolated from past listeria patients and connect them back to the specific outbreak.
Bill Marler brought this up in his lecture at MSU’s Creating A Food Safety Culture Executive Education. He described this as like a hand reaching out from the grave to hold a company liable.
So back to my original question: Is the uptick in Listeria outbreaks due to a change in me, the media, food manufacturing, or detection? WGS is going to make it progressively easier to detect and trace back illnesses. The following slide, from Dr. Wiedmann, shows that environmental sampling demonstrates that the presence of listeria in food manufacturing environments is going down, but detected outbreaks are going up. 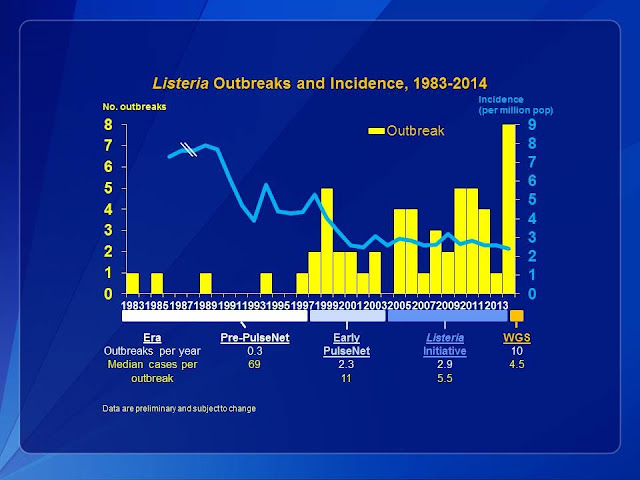 This pattern of increasing illness detections is not going to be limited to Listeria. Whole genome sequencing was implemented for Listeria in 2013, but the CDC is expanding its use in other foodborne pathogens.
For most consumers, this might mean it seems like there’s more outbreaks happening and that the food system seems less safe. However, it’s actually a good thing for consumers. WGS, and increased surveillance and traceback, is going to make it easier to conclusively connect a person’s illness to a food product and thus meet the legal standard for holding the company liable. So consumers who are injured are more likely to be compensated, while bad actors are more likely to be detected and held accountable.
This poses a major risk for any company that doesn’t make food safety a top operational priority. Another speaker at the MSU Food Safety Executive Training, Dave Theno, called this risk the one metric you bet your company on every day.
However, WGS won’t just catch bad actors that wantonly disregard public health. The Food, Drug, and Cosmetic Act prohibits the introduction into commerce of any food that is adulterated or misbranded, 21 U.S.C. § 331.
Usually, to be convicted of a crime requires some kind of criminal state of mind, such as intentionally or knowingly doing the act that is prohibited.
Not so for the FDCA.
21 U.S.C. § 331(1) states “Any person who violates a provision of section 331 of this title shall be imprisoned for not more than one year or fined not more than $1,000, or both.”
This penalty provision requires no knowledge of the fact that you are introducing adulterated food into commerce. Simply by introducing adulterated food you can be convicted of a misdemeanor.
The Jensen Brothers, who were responsible for the 2011 listeriosis outbreak linked to cantaloupe, were convicted of misdemeanors, though they had absolutely no intent or even knowledge that they were releasing contaminated food into the market.
If you are convicted and introduce an adulterated or misbranded product, or do it “with the intent to defraud or mislead,” you can be convicted of a felony. 21 U.S.C. § 331(2).
Did you know Dole and Blue Bell are under criminal investigations for their recent Listeria outbreaks? These investigations have to do with what the companies knew about the conditions at their plants and what they did (or chose not do) about it.
Furthermore, under the Park Doctrine, any corporate officer who had “authority with respect to the conditions that formed the basis of the alleged violations” can be held liable, United States v. Park, 421 U.S. 658, 674 (1975).
Notably, one of the ways a food can become adulterated is if it was manufactured or held under unsanitary conditions. 21 U.S.C. § 342(a)(4). So the food doesn’t have to actually be contaminated, just produced in a facility where it could become contaminated. For instance, if there was, say, Listeria hanging out in a floor drain or some floor mats that might occasionally contaminate a batch of ice cream or salad.
So under Park, a corporate officer can be held liable if  he had authority to deal with a situation, such as food manufactured or held under unsanitary conditions. 421 U.S. at 674.
Want to know more about this kind of liability? Dr. David Acheson, the former Associate Commissioner for Foods at FDA, will be talking about how to avoid criminal investigations at the upcoming MSU Food Law Current Issues Seminar, July 12-14 in East Lansing, MI. Of course, the best way to avoid a criminal investigation is to prevent any illnesses in the first place. We have quite a few speakers and panels that will cover how to do that as well.
There’s still a few spots left for anyone — lawyer or otherwise — to learn about how great it is to be a food lawyer. Maybe you’ll even find out you want to be one.

[1] I asked Dr. Wiedmann to share his slides with me, but everything I write here is my understanding of the science. So if anything is wrong, please don’t impute it to Dr. Wiedmann.

My name is Michaela Oldfield, and I am the Global Food Law research fellow with the Michigan State University Institute for Food Laws and Regulations and the Global Food Law Program. I have a J.D. from the University of Michigan and a Ph.D. from Michigan State in the Department of Community, Agriculture, Recreation and Resource Studies. My dissertation research was on the Food Safety Modernization Act, but my interests cover a range of regulatory issues from field to fork to waste. I like spending my time thinking about how to design, adopt and implement regulations that balance the diversity of interests affected by food and agriculture policy (without being captured too much by special interests) and are flexible and dynamic to the constantly changing world around us (but without being dysfunctionally unpredictable). Luckily, that is much of what I will be doing here! Being the Global Food Law Research Fellow means I get to interact with food professionals, lawyers, academics and government officials to identify, understand and help educate people on the numerous ways food law and policy is evolving and impacting globalized agri-food systems.