Since we last checked in we’ve had a busy week and a half.  The Abbot entrance landscape rejuvenation project is coming to a close, so we’ve been able to finish work there and move onto testing other research questions.

Although the rejuvenation construction was not directly impacting the north west corner of the Abbot entrance, I wanted to conduct a survey in this area so that we could consider the entire west side of the road surveyed.  The NW corner was home to the U.S. Weather Bureau.  The building was constructed in 1909 and demolished in 1948.  Dewey Seeley and his family occupied the building, while Mr. Seeley recorded daily weather data and provided forecasts for the area. As the campus, and East Lansing, grew around the Weather Bureau Mr. Seeley complained about the encroachment near the bureau.  He petitioned the federal government for the construction of a new weather bureau in a different location, and a new structure was built by the federal government on land leased by the college. That building is today known as the Wills House, located just west of Mayo Hall.  From 1927-1940 the old bureau building served as the music center, from 1940 to approx. 1943 it was the Works Progress Administration Headquarter, and finally the Placement Center until its destruction in 1948. 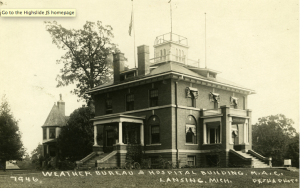 The bureau was demolished by George Boone of Jackson MI, who paid the college $400 to remove the building.  Because Mr. Boone paid the college, rather than being paid by them, our investigation sought to discover how much of the weather bureau remained after he salvaged/scrapped the building. 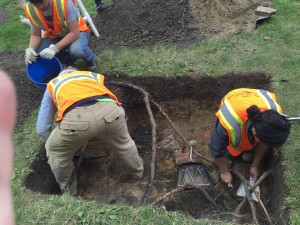 We were unable to locate any intact foundation walls or floors.  However, a dense layer of rubble does cover that entire area.  Artifacts were mostly building related including bricks, nails, roofing slate, and concrete.  One curious artifact category were bricks made out of concrete, something we had not encountered before.  Two of the concrete bricks were sent to Civil Engineering for inspection. 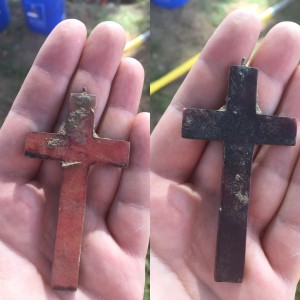 While we were excavating the weather bureau a reporter from the Lansing State Journal came by to write a story on CAP.  We even made it on the cover of the journal!  The complete article, along with a short video, can be found on the journal’s website. 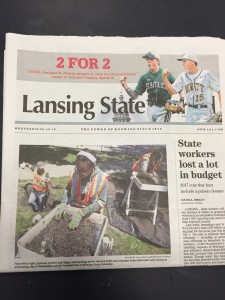 CAP in the Lansing State Journal 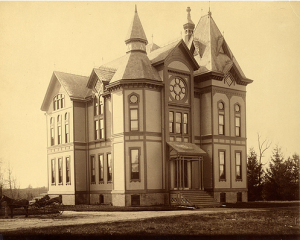 The location of Beal’s first botanical laboratory is marked with a large historical plaque.  We did some brief investigations in this area in 2009 or 2010, but aside from probing have just assumed that the building foundation was still present.  Earlier this week we opened three 1×1 units on the eastern edge of the grassy area to determine the extent of the foundations/artifact presence.  We were also trying to determine the orientation of the building.

Our excavations were exploratory in nature, and we limited the disturbance to three units.  One unit appears to be outside the extent of the buildings footprint, but two units located walls.

Unit one locate a large field stone wall just below the modern ground surface.  This wall section ran almost due N/S (4 degrees), and was 80 cm in total height.  The wall was surrounded by sterile fill sand, most likely a builders trench from the construction of the building.  Interestingly, although this unit had melted glass, they did not have a burn layer. 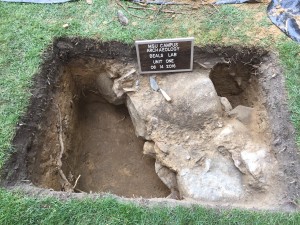 Unit two located a smaller, possibly interior, wall made of medium size cobbles with a mortar layer on top.  On one side of the wall was sterile fill sand, while the other side had a larger rubble and burn layer.  This unit also encountered large amounts of burned and cracked glass, as well as hand cut square nails. 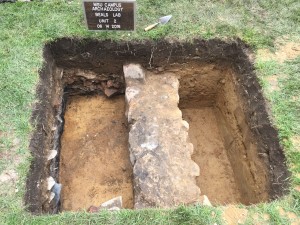 Finding these two walls, as well as discussing the presence of a third known wall with people that work in the Beal Botanical Garden, helps us better understand the orientation and current state of the structure.