This summer we had the opportunity to excavate in several different areas of north campus. We began the summer working in conjunction with the Abbot entrance landscape rejuvenation project. This required us to survey down the center median, as well as either side of the road. I talked briefly before about the general history of this area, as well as a summer progress update. We were able to locate the basement of Station Terrace.

Chances are you’ve never heard of Station Terrace. The building stood just east of Faculty Row, near the southern end of the current Abbott entrance median. There’s not much information out there regarding the building, but we do know that it had many different identities during its life on campus. 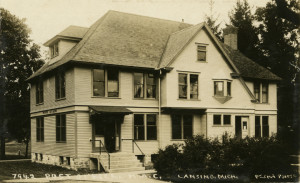 Station Terrace was likely built during the 1880s or early 1890s (the earliest photo documenting the building is from 1896). Its original purpose was to provide housing for researchers visiting from the M.A.C. experimental stations. Later it was used to house bachelor instructors, earning its nickname the Bull Pen (perhaps also acquired as a counterpoint to Morill Hall’s nickname the Hen House). 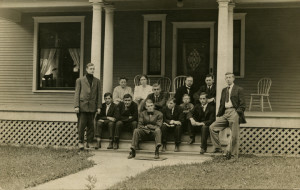 During the evening of January 24th, 1903 the building was damaged by a fire started by a faulty chimney. There were several issues in the containment of the fire, including many of the volunteer fire fighters being at a society room party, lacking the proper wrench to screw into the closest hydrant, a frozen fire hydrant, and a burst water main. They eventually got the blaze under control, but substantial damage occurred to the west end of the building. However, it was recommended that the building (as well as other areas on campus) become outfitted with modern fire extinguishers and hand grenades.

Following the fire, some board members suggests remodeling the building, and changing it into a two family household. They went as far as to have the college architect prepare a sketch for the remodeling, but ultimately decided that they would derive more revenue and benefit from restoring the building to its former state with several apartments.

Between the spring of 1903 and 1923 the building housed the East Lansing post office. Because of this Station Terrace is often referred to as the old post office on maps and in historical documents. In 1902 after the demolition of the original trolley car waiting room, it was moved to Station Terrace. In 1921 the old college waiting room was taken over by the Flower Pot Tea Room, a café run by women in the home economics program. 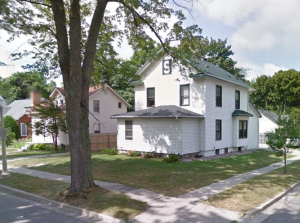 Station Terrace, as well as several other buildings, were in the path of the Abbot Road entrance construction. However, the building was not demolished. In 1923-1924 it was moved off campus, to 291 Durand Street. The structure was also modified, and portions of the building were used to build the house next door. From the right angle, it still bears a slight resemblance to its former arrangement.

Because the building was physically moved off campus, and not demolished, collapsed, or burnt down like many other buildings we excavate, I was unsure what we would actually find. I was pleasantly surprised.

During our final row of STPs we encountered a large fieldstone at the depth of 1m. This unit was expanded, and expanded, and then expanded some more. We had located an interior dividing wall, in what I feel is the basement of Station Terrace. Further excavations revealed a concrete floor, water and sewage pipes, concentrations of sheet metal, an intact paste jar (more on this jar coming in a future blog!), and a pair of men’s shoes. The east side of the unit also contained some beautiful stratigraphy. 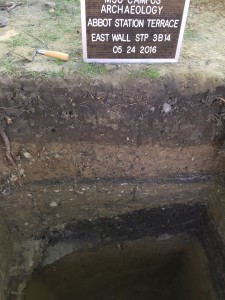 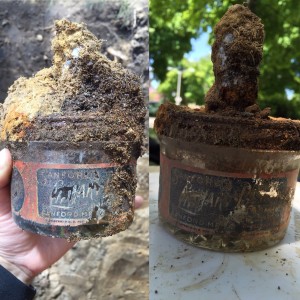 I’m still busy conducting more research on this location, and its possible suitability as a location for the next field school.

Justin L. Kestenbaum, ed. At the Campus Gate: A History of East Lansing. 1976.

Board of Trustee Meeting Minutes Notes: 1903.