I love food. Ask anyone. I didn’t begin my archaeological career studying food, but my interest in ancient pottery eventually brought me around to the study of cooking and diet. It is not surprising, then, that my passion for eating ultimately led (albeit indirectly) to research focusing on culinary traditions and behaviors.

I love studying food because its central role in both our biological and social lives makes it an ideal, dynamic, and engaging topic of anthropological inquiry. Our daily schedules are constructed around meals, and food is often the centerpiece of holidays and celebratory events. The consumption of food brings people together, like families at mealtimes or friends meeting up for dinner. Shared food preferences can help bridge gaps and form bonds between strangers—a mutual love of barbeque chicken pizza may serve as the foundation of a new friendship. But regional or ethnic differences in food traditions can also divide—people from Chicago and New York may argue about which style of pizza is the best. 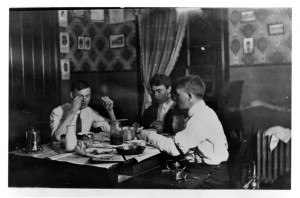 When Campus Archaeologist Lisa Bright first mentioned her idea, recreating a meal based on archaeological food remains found in a historic privy on campus, my interest was piqued. The brick-lined privy, located near the MSU Museum, was discovered and excavated by CAP in the summer of 2015. It contained a variety of interesting items, from dolls to broken dishes and various bottles. Also in this privy were discarded food remains. Privies were perfect places to throw smelly food leftovers and bones since they are already quite malodorous. And some remains, such as seeds, were probably deposited there…by some other means (you might call it “delivery method #2”). 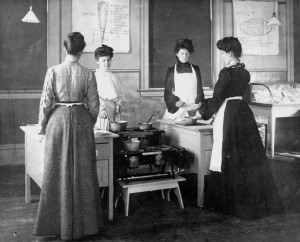 This year, fellow CAP fellow Autumn Beyer and I will be using the food remains from the privy and the Saints Rest excavations to explore and recreate the food environment of the MSU campus during the Early Period (1855-1870). We will be exploring the archives for information about early MSU food production, acquisition, purchasing, preparation, serving, and consumption. Autumn, a trained zooarchaeologist, will conduct in-depth analysis of the animal bones from the collection, of which primary identifications of cow, pig, chicken, and fish have been made. Other food remains include egg shell and raspberry seeds. We may even try to sprout one of the raspberry seeds with the help of CAP intern Becca Albert!

A perusal of CAP blogs from throughout the past year will show that we have already researched many of the types, origins, and prices of some of the dishes found in the privy, which helps us connect the food being cooked to how the food was served. A bottle of flavoring extract was also present in the privy (check out my blog on this item from April!), so we know that campus cooks were beginning to dabble in adding synthetic flavoring to dishes.

Ultimately, we hope to work with MSU Food Services to recreate a meal based on the remains in the privy and create an educational video documenting the process. Autumn will also spearhead creating a website for the project, which she will detail in upcoming blogs. 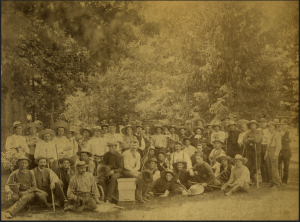 Understanding the foods prepared, served, and consumed by nineteenth-century students and faculty at MSU will help us recreate what life was like during the earliest years of MSU. Archaeology is all about connecting the present to the past, and what better way to make these connections than through our stomachs?