The Federal Supplemental Nutrition Assistance Program (SNAP) is the single largest nutrition-related safety net program in the United States, providing more than 45 million low-income Americans (link is external) (or nearly 15 percent of the population) with monthly benefits that help them to put food on the table. The federal government foots the bill for the program and (for the most part) sets the rules 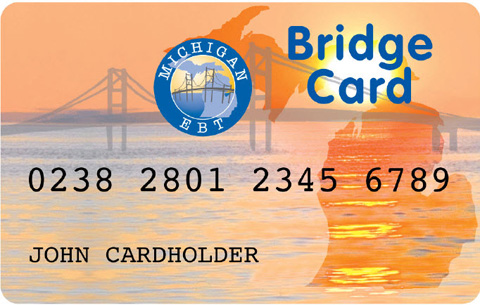 deciding who’s eligible to receive assistance, while it’s up to states to administer benefits to their respective residents. Michigan’s version of SNAP is aptly referred to as the Food Assistance Program, or hereafter as “FAP”.

In Michigan, a similar share of the population receives FAP benefits as compared to the United States’ overall SNAP enrollment; FAP recipients in Michigan represent around 15 percent of the population (link is external) (in recent years, that number reached 25 percent, but more on that later). Monthly benefits average around $120 per person, or $230 per household (link is external), administered through the bright orange and easily recognizable “Bridge Cards.” Eligibility is mostly based on income, though some assets can keep households from qualifying. For example, you may qualify based on income if your family of four earns an annual income of $24,252 or less, but if you have more than $5,000 in the bank, you’re out of luck. Vehicles valued at more than $15,000, or investments and trusts worth more than $5,000 (link is external) can also serve as disqualifying measures.

Income limits by size of household are pictured in the USDA table below:

Because eligibility for food assistance is heavily dependent on income, experts tend to watch changes in enrollment as indicators of how well (or poorly) state populations are doing economically, particularly states’ poorest populations.  Sharp rises in enrollment can be cause for concern as they can serve as an indicator that more citizens are falling further into poverty, while decreases in enrollment (unless driven by changes in policy, but more on that later) can indicate that more people are better off than before.

As shown in the graph below, FAP enrollment in Michigan has been falling since the Great Recession (as we would expect), but we’ve still got a ways to go before we reach pre-recessionary levels. Before the recession, around 12 percent of Michigan’s population (link is external) was enrolled in FAP; during the recession enrollment reached levels up to 25 percent (that’s 1 in 4 Michigan citizens!), and latest caseload numbers reflect around 15 percent of the population. When compared to trends in Michigan’s unemployment rate (often considered one of the most important economic indicators), the correlation between FAP enrollment and employment is clear.

While the last few years show that Michigan has seen gradual FAP declines, recent month-over-month declines show more drastic reductions, presented in the graph below. Through Fiscal Years 2015 and 2016 (data through June), each month has seen an average drop ranging somewhere between 7,000 and 8,000 people, with a total decline of around 160,000 people since October 2015. The graph also provides a visual of how Michigan’s FAP trends compare to national SNAP trends, indicating that Michigan isn’t alone in experiencing overall caseload declines.

But before we can declare success, it’s essential to make sure any policy changes that could also be contributing to these declines are explored. While the federal government sets general requirements, states are also able to make limited changes relating to eligibility. In Michigan, the most recent policy changes affecting the FAP program were made in 2011, (link is external) when the aforementioned asset limits were first introduced. Since enrollment in the program had already begun to come down from its 2010 peak, it can be difficult to discern what impact that policy change had on enrollment, though it could have accelerated the start of the gradual post-recession decline. While it may be difficult to quantify, it’s also likely that these policies only discouraged savings for those with recession related job losses, or simply prevented those who had lost their jobs from accessing food assistance if they possessed contingency savings above $5,000. Additionally, as it’s been five years since implementation, we can safely assume that those policy effects would no longer be driving the more recent declines.

At the national level, there’s one policy change in particular that is credited with removing a substantial number of people from food assistance: the re-implementation of work requirements for childless, able-bodied adults. (link is external) As part of welfare reform in the 1990s, a three-month time limit was implemented for childless adults receiving food assistance who weren’t working at least 20 hours a week. Once the Great Recession hit, the federal government allowed states to temporarily remove this requirement if unemployment was high, the idea being that food assistance shouldn’t be conditional on work when work isn’t readily available.

Now that the economy is bouncing back, many states are no longer eligible for this waiver. According to the Center on Budget and Policy Priorities, this change is estimated to impact anywhere from 500,000 up to one million people in the United States. (link is external) Interestingly, states such as North Carolina, Florida, Mississippi, and Arkansas are voluntarily electing to remove the waiver even though unemployment is still high enough in certain areas to qualify. These work requirement changes likely explain the dip in national enrollment starting in 2016, at least in part.

While the re-implementation of the work requirements can help to partly explain declines at the national level, Michigan is one of seven states still operating under the work-requirement waiver, due to stubbornly high unemployment in certain areas around the state. That being the case, we can be cautiously optimistic that the consistent drops in enrollment now being seen are more likely to be a result of modest economic gains for some Michigan’s residents, as opposed to the national declines that have been influenced by the re-implementation of work requirements.

While this may be a promising sign for Michigan’s low-income population, it’s important to note we’ve still got a ways to go before reaching pre-recessionary levels.