While Lisa Bright and I were accessioning artifacts from the West Circle Drive privy excavation, we noticed that one of the short combs had some lettering. Faint, tiny print spelled out, “IRC CO. G YEARS” with a few other letters (or numbers) that we could not read. Some quick Googling brought up the India Rubber Company based out of New York City, one of the first two hard rubber companies to sell products made through the process of vulcanization. 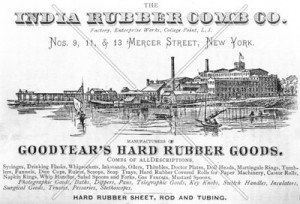 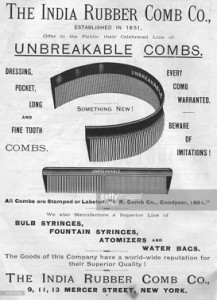 Charles and Nelson Goodyear developed the vulcanization process, or applying heat to rubber treated with sulfur, in 1839 which allowed for hard rubber products to be produced in mass quantities. Through experimentation, Charles Goodyear was able to turn raw rubber into a malleable, stable substance, while Nelson Goodyear figured out how to adapt the pliable rubber into vulcanite (hard rubber) that could be used to make a number of personal items including buttons and brushes1. In the mid-1850s, ivory and wooden combs were largely en vogue until the Goodyear brothers utilized vulcanite to manufacture rubber combs of all sizes. Initially, the vulcanite combs cost twenty times as much as the combs previously in use, but (presumably) the superior quality of the rubber combs produced by the Goodyears contributed to their staying power2. Specialists who were originally trained in making each ivory and tortoiseshell by hand were replaced by comb-cutting machines by 18653. Mechanized production eventually allowed for the creation of two combs, whereby one comb was created from the spaces of the teeth of the other comb. Increased production and eventual expiration of hard rubber patents led to significant expansion in comb manufacturing, so India Rubber Company began to stamp each comb with the manufacturing date and a guarantee against breakage for twelve months3. 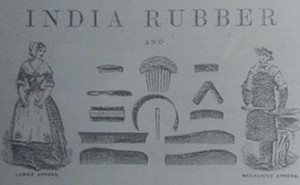 So what does vulcanized rubber have to do with Campus Archaeology? Enter: the beard (and mustache?) comb! 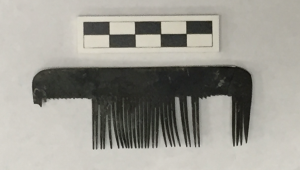 The comb measures approximately 3.5 inches in length and 1.25 inches in width, making it fairly small. Since the comb wound up in the privy, we can only assume that a recently clean shaven man was just done with all facial hair maintenance! Just kidding. It’s likely that the comb ended up in the privy accidentally, as the India Rubber Company was very proud of the durability of their allegedly unbreakable combs. Perhaps one of these guys, or someone similar to them, used the comb: 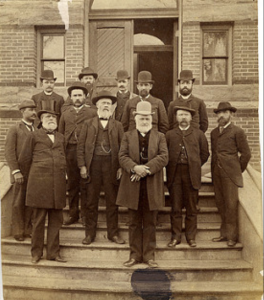 Hard rubber combs from the same time period have been found in other archaeological contexts and even wind up in art museums. Check out a fancy 1851 comb manufactured by India Rubber Company that is in the collections at the Met: http://www.metmuseum.org/art/collection/search/16809. The excavation of the SS Republic, a famous shipwreck, yielded a number of artifacts produced by the India Rubber Company including combs, a woman’s headband, and even a hygienic douche (check out the artifacts here: http://odysseysvirtualmuseum.com/categories/SS-Republic/Artifacts/Personal-Necessities/).

As we go through the rest of the privy materials, we will continue to do historical research on each of the personal items found in the assemblage. Perhaps we will get lucky and find another dateable piece!