During a recent visit to the MSU Archives, I was beginning my search through records pertaining to food and came across a rather interesting folder containing programs for various MSU and other local banquets. These programs all featured menus for the event, and demonstrate changes in taste and cuisine over time. Naturally, they piqued my interest. 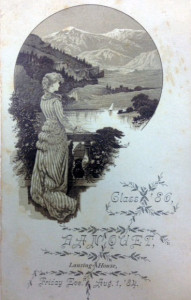 The first menu is for the “Class of ’86 Banquet” held on August 1, 1884. This banquet seemed to be quite a grand affair. It was held at the Lansing House Hotel in downtown Lansing, which became the Downey Hotel a few years later and was the premier luxury hotel in the area (it was later torn down and the famous Knapp Building was built in its place). The menu for the banquet was extensive; topping the menu was “Chicken Salad, a la Mayonaise” and “Lobster Salad.” Cold dishes included items familiar to us now, such as sliced turkey, chicken, and sugar cured ham, as well as some less familiar fair—“boned turkey with Jelly,” “Beef Tongue, Spiced” and “Pressed Beef”. Boned turkey is a whole turkey carefully de-boned and baked or boiled for a long period of time, served cold over a savory jelly made of calves’-foot (yum!). Spiced beef tongue is much as you would imagine. Variations have been popular in parts of Latin America, where it is know as “lengua”, but tongue has rather fallen out of typical modern American cuisine. Pressed beef is made when a joint of silverside beef is boiled, pressed, sliced and served cold. 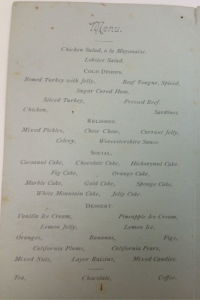 “Relishes” on the menu include something called “Chow Chow”. This relish is around today in the southern US, and consists of some combination of tomatoes, cabbage, onion, carrots, bean, asparagus, cauliflower, and peas, which are all canned and pickled together.

Now here’s where things get really exciting: Under the “Social” category on the menu are listed ten, yes, TEN, different types of cake. Cake is one of my favorite foods, so this is my kind of party. Most of the flavors are typical, although you may not recognize “white mountain cake,” which is 3-layer white cake flavored with lemon, frosted between layers and over the outside (YUM). In addition to the cake were “Desserts” such as various ice creams and fruits. 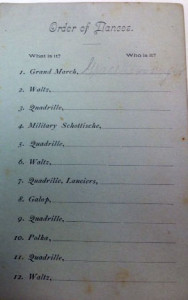 The other half of the interior Banquet program listed the order of dances with a space to fill in your partner for each one—a dance card. The owner of this program had but one blank filled in; he was to do the Grand March with Grace Boosinger. Curiosity prompted an internet search of her name, which turned up the alumni update section for the Iota Chapter (Michigan Agricultural College) of the Delta Tau Delta fraternity in 1892. It reported that H.E. Thomas married Grace Boosinger (“his old freshman girl) on July 12, 1892, and that he had been “re-nominated as circuit court commissioner.” Harris Thomas was a mover and shaker – he began his career as a lawyer but served as president of multiple companies later on and even served as a US Postmaster. He and Grace lived in Lansing their whole lives and are buried here as well. It seems he only had one name on his dance card for a reason…

But I digress. Let’s jump ahead to 1926, from which we have a program for the “All-College Night Banquet… Celebrating Jointly the Sixty-Ninth Birthday of the Founding of the Michigan State College and the Opening of the New People’s Church.” The menu this time is a bit simpler with fewer options, and approaching closer to the types of food we might expect at a banquet today. Menu items include fruit cocktail, veal birds, mashed potatoes, gravy, head lettuce with Thousand Island dressing, rolls, butter, ice cream, cupcakes, and coffee. Veal birds are pounded strips of veal rolled or wrapped around a stuffing, and while perhaps not a staple of American cuisine, one can find modern recipes for them online. 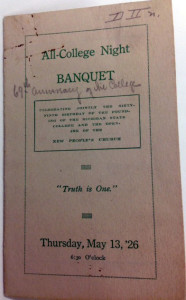 The menu for a banquet held by the Michigan State College Board of Publications in 1939 grows even closer to modern feasting fare. The spread consists of cocktail, baked ham, au grautin potatoes, corn, spring salad, assorted rolls, coffee, and fresh strawberry sundaes. I would expect to find this exact menu at certain catered events today. 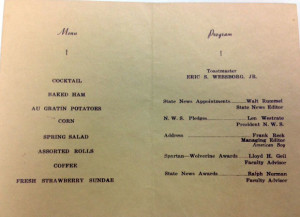 Over the course of fifty-five years, it is interesting to see evolving food preferences on the MAC/MSC/MSU campus. Early banquets featured a wide variety of foods, many of which were labor-intensive for preparation, and included a number of dishes not readily familiar to the modern palate. They were also heavy in meat, which was considered a symbol of wealth. The 1884 MAC banquet seems to have been an attempt by the class or college to display or at least mimic the upper class traditional of “conspicuous consumption.” Display of a wide variety of foods, especially meat, which was expensive, was a tradition dating back to medieval times.

Moving into the 20th century, the variety of food offerings became narrower, the options generally easier to produce en masse. There is a trend of simplicity and subtle flavors during the pre-war era, expressed in fare such as potatoes, salad, and rolls. Also, it is presumable that as class sizes grew on campus (including the addition of women), that budgets were tighter and food choice had to be more economical. There are likely a variety of other factors influencing these differences, which I hope to investigate further in the future.

We still know little about the food traditions of the early MAC period (1855-1870), neither in terms of daily student and faculty diets in the campus boarding facilities, nor of special event food traditions. This will require digging deeper into the archives and using archaeological evidence to recreate the earliest diets of our academic predecessors. I, for one, have both my trowel and my fork ready to dig in.