Hello! Recently I had the chance to visit the new museum and I wanted to share my thoughts with fellow archaeologists and the wider CAP community. I hope you enjoy it and please leave comments or questions if you would like anymore information!* 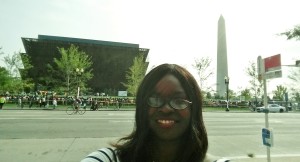 Blair outside of the NMHHAC. Photo Blair Zaid

September 24th, 2016, marked the opening ceremonies for the Smithsonian Institution National Museum of African American History and Culture (NMAAHC), the culmination of a century long battle for federally recognized space to celebrate and reflect on the African American experience in the US. The opening ceremonies included much deserved fanfare with Presidents Bush, Clinton, and Obama in attendance along with Oprah Winfrey, Angela Basset, and a host of creatives, scholars, politicians, and community members standing in celebration of this moment of representation and promise. The museum, spearheaded by Senator John Lewis and founding director Lonnie Bunch, sits on the National Mall in Washington D.C. along with the Washington Monument and the Lincoln Memorial.

As a material cultural specialist of African descendant populations, this occasion marked a moment, or perhaps a momentum towards collective appreciation of the significance of Black material culture, past and present. Personally, the NMAAHC, with over 37,000 items, becomes a beacon that I can point to when faced with adversity regarding the significance of the material culture of African Americans and why we need more folks studying and critically engaging these objects within these overlapping cultural context.

This blog highlights a handful of my thoughts about the exhibits, stories, opportunities, and beauty of this new place, specifically the Slavery and Freedom section. The museum has 2 upper floors and a 3 level concourse. The upper floors showcase a variety of religious, athletic, military, culinary, musical, and many other elements of Black expressive culture. The concourse represents a permanent exhibit that shows the journey of African Americans through slavery and freedom. The exhibit begins on the lowest level of the concourse with pictures and information about the capture and enslavement of African people along the coast of Atlantic Africa. This area of the exhibit includes pieces of ship wreck items, beads and trade goods, and other glass fragments, personal adornment pieces, and a key. In their fragmented state, they demonstrate the tenacity, entrepreneurship, and humanity of the Africans enslaved in the U.S. There is a room next to the exhibit that invokes the cramped, dark, sounds of a slave ship, the room includes a display of shackles for adult and children. At the top of the display, there is a tiny set of shackles that were worn as jewelry presumably by one of the slave ship crewmen. 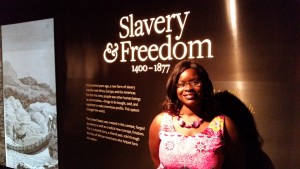 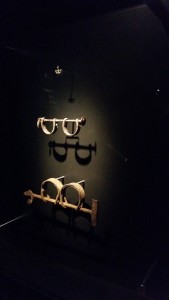 The concourse exhibit continues on to highlight the individual and collective stories we now know from enslaved and free African descendants. These stories are bought together through oral histories, archives, and artifacts. For example, the museum displays clothing from African revolutionary war soldiers, who were granted freedom through their service by the British, Harriet Tubman’s famous white shawl, and Nat Turner’s bible. These items connect the stories of centuries of struggle for freedom that lay literally on the backs and within the hands of enslaved people. This section also beautifully interweaves the stories of the formation of the United States around the question of the status of enslaved human beings. It weaves the cotton industry, Thomas Jefferson, Toussaint Louverture, and the building of the White House in a way that requires you to engage them as one entity. This section demonstrates that none of the successes or failures of these stories can be told separately, they build on each other and always engage each other. 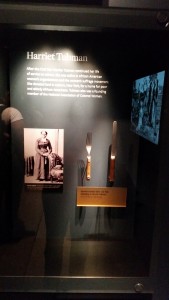 The section ends with a fully constructed house, given by a descendant of an enslaved person, which was known and documented to be an actual ‘slave quarter.’ This house, that people lived in as enslaved human beings and whose descendants lived in through the 20th century, demonstrates that such items are not merely historical artifacts devoid of contemporary meaning. Such places hold stories that lasted through the 20th century, wrapped up in contemporary racisms of land and property ownership, and for many museum goers within ear shot, the connections were just too “painful to look at” and “reminded them of houses places within their own families. 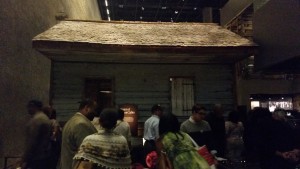 In interest of blog length, I will discuss the post-Civil War exhibits and the two upper floors in detail in another blog. Here I will say that for me, every single American, and anyone interested in Black culture specifically, should experience this journey, be it in person or through the website. As President Obama said in his opening speech on September 24,  this museum “provides the context for today’s debates”. The objects, videos, sounds, and depictions of African American history and culture in the US illustrate that our past is intimately tied to the American journey.

For more information search the hashtag #APeoplesJourney or visit their website www.nmaahc.si.edu!