Nature covers some work by Jonathan Wai and myself. See here for a broader ranking of US schools, which includes Nobel, Turing, Fields awards and National Academies membership.

Where Nobel winners get their start (Nature)

Undergraduates from small, elite institutions have the best chance of winning a Nobel prize.

There are many ways to rank universities, but one that’s rarely considered is how many of their graduates make extraordinary contributions to society. A new analysis does just that, ranking institutions by the proportion of their undergraduates that go on to win a Nobel prize. [ Note: includes Literature, Economics, Peace, as well as science prizes. ]

Two schools dominate the rankings: École Normale Supérieure (ENS) in Paris and the California Institute of Technology (Caltech) in Pasadena. These small, elite institutions each admit fewer than 250 undergraduate students per year, yet their per capita production of Nobelists outstrips some larger world-class universities by factors of hundreds.

“This is a way to identify colleges that have a history of producing major impact,” says Jonathan Wai, a psychologist at Duke University in Durham, North Carolina, and a co-author of the unpublished study. “It gives us a new way of thinking about and evaluating what makes an undergraduate institution great.”

Wai and Stephen Hsu, a physicist at Michigan State University in East Lansing, examined the 81 institutions worldwide with at least three alumni who have received Nobel prizes in chemistry, physiology or medicine, physics and economics between 1901 and 2015. To meaningfully compare schools, which have widely varying alumni populations, the team divided the number of Nobel laureates at a school by its estimated number of undergraduate alumni.

Many of the top Nobel-producing schools are private, and have significant financial resources. Among the more surprising high performers were several very small US liberal-arts colleges, such as Swarthmore College in Pennsylvania (ranked at number 4) and Amherst College in Massachusetts (number 9).

“What these smaller schools are doing might serve as important undergraduate models to follow in terms of selection and training,” says Wai, who adds that, although admission to one of the colleges on the list is no guarantee of important achievements later in life, the probability is much higher for these select matriculates.

To gauge trends over time, Wai cut the sample of 870 laureates into 20-year bands. US universities, which now make up almost half of the top 50 list, began to dominate after the Second World War. Whereas French representation in the Nobel ranks has declined over time, top-ranked ENS has remained steady in its output.

Hsu and Wai had previously performed two similar, but broader, analyses of the rate at which US universities produce winners of the Nobel prize, Fields Medal (in mathematics) or Turing Award (in computer science), as well as members of the US National Academies of Sciences, Engineering, and Medicine. These studies produced rankings of US institutions that are similar to the new, global Nobel rankings.

Santo Fortunato, a theoretical physicist at Indiana University Bloomington who has researched trends in Nobel prizewinners, deems the analyses “quite interesting”, but cautions that the methodology cannot produce a highly accurate or predictive ranking. “There is a high margin of error due to the low numbers of prominent scholars,” says Fortunato. [ See here for a broader ranking of US schools, which includes Nobel, Turing, Fields awards and National Academies membership. ]

Wai and Hsu agree that there are statistical uncertainties in their rankings, owing to the small number of prizes awarded each year. The two are confident that the ENS and Caltech lead the pack, but statistical fluctuations could change the order of schools placed from third to ninth, Hsu says.

The researchers say that their findings suggest that more attention should be paid to the role that undergraduate institutions have in their graduates’ outstanding accomplishments. They also argue that quantifiable achievements are a better gauge of the quality of universities than factors such as reputation, graduation rate, faculty and financial resources and alumni donations.

Regarding statistical fluctuations, if one takes the data as an estimator of a school-related probability for each graduate to win a Nobel, then at 95 percent confidence level ENS and Caltech are the top two schools, but fluctuations could (for example) change the order among #3 (Harvard) through #9 (Amherst). In other words, we can’t be >95 percent confident that Harvard grads have a higher probability than Amherst grads, although the central value of the estimated probability is higher for Harvard. 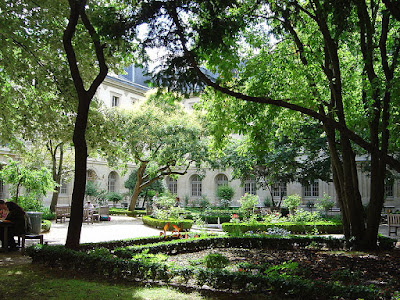 Regarding ENS and their elitist method of selecting students, see below. Two years of preparation for the entrance exam! Also: Les Grandes Ecoles Chinoises and The Normaliens.

Wikipedia: The school, like its sister grandes écoles the École Polytechnique and the École Nationale d’Administration, is very small in size: its core of students, who are called normaliens, are selected via either a highly competitive exam called a concours (Baccalauréat + 2 years) … Preparation for the “concours” takes place in preparatory classes which last two years … Most students come from the prépas at the Lycée Louis-le-Grand, the Lycée Henri-IV, and a few other elite establishments in France. Two hundred normaliens are thus recruited every year …

Lycee Henri-IV is in the Latin Quarter on the left bank, one of my favorite parts of Paris. The book shops and cafes are filled with serious looking young students. Vive la France! :-)