Dining as a student is not quite as classy as it used to be.  In today’s fast paced world, many meals for students are enjoyed on the run or in front of the TV, while others take theirs on a tray in a cafeteria full of hundreds of their best friends.  Mealtime is not the important activity it once was, at times even being forgotten or seen as an inconvenience, but it was not always so.  During the beginning years of Michigan State University, campus dining was an event and an integral part of a student’s education. 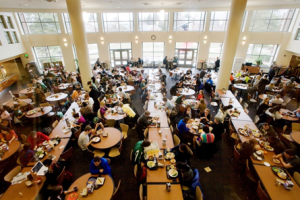 Students eating at “The Vista at Shaw”, Image Source

At the time of MSU’s founding (1855), dining was a significant social statement in the United States and Europe.  In this time of Victorian ethics and heightened class tensions, the dining room was seen as a “social arena,” a space where an individual could demonstrate one’s level of class, wealth, morality, and even civilization (Williams 1985:22).  Participants were encouraged to act with proper etiquette, or else be seen as less respectful and below the social level of others.  These same rules also applied to the host, who was expected to provide a proper meal in an environment appropriate for the occasion.  If one could not play the proper host, then one was incapable of following the Christian ethic of hospitality and was not fit to be a member of a certain class.

Not only was the dining room a place for display, but it also served as a space for learning.  Family meals and dinner parties were events during which children and other family members could learn about and practice being proper “civilized” adults.  As these spaces could influence the upbringing of young people, dining spaces were supposed to be appropriately decorated as to inspire good character traits, but also be simple enough that the room did not distract from its social function.  This included the table settings.

As order and symmetry were symbolic of a “heightened level of civilization,” coordinated and functionally divided dinnerware sets, including numerous sizes of plate, soup bowls, serving bowls, platters, and tureens, were desired and became a symbol of wealth and the upper class (Williams 1985:78).  Less fortunate members of the community during this time tended to own only a few pieces of dishware, which were used communally by the family, while the richest members of the community may have owned multiple sets of dishes that could be used for different meals and social settings, such as one for family dinners and one for dinner parties, all made from fine porcelain. 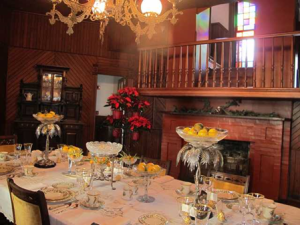 At MSU, these same concepts held sway.  On the early campus, every boardinghouse, such as Saint’s Rest, had its own kitchen and dining room for feeding its inhabitants.  According to an 1872 inventory of the property owned by the college within Saint’s Rest, this dining room was furnished with a number of tables and chairs, as well as 3 soup pans, 23 water and 23 milk jugs, 27 sugar dishes, 26 pickle dishes, 158 pie plates, 9 large platters, 34 small platters, 141 soup plates, 156 dinner plates, 23 gravy boats, 120 tumblers, 138 saucers, 159 sauce plates, 36 cake plates, fruit and jelly dishes, and other types of dishware.  All of the dishware was valued at over $250, which is a small sum considering how many dishes were owned by the college (MSU Archives: Joseph R. Williams Papers).

While this dishware collection was by no means fancy for the period, as the few ceramics recovered from the Saint’s Rest excavations were granitewares, it does indicate that the same beliefs about dining were found on MSU’s campus during this time.  While they needed to be economical, the founders of MSU must have believed in the social and educational value of the dining performance; therefore, they allocated some of the money granted by the government toward buying a coordinated table set large enough to feed a great number of people.  During dinners at Saint’s Rest, students were assigned specific seats and were served with food using the same functionally divided dinner sets that were used in middle class and wealthy households across the United States.  While students were trained in a number of academic subjects, they also were educated in the same rules of etiquette and dining that ruled the Victorian world, allowing those already accomplished to continue their typical lifestyle at the same time that others less accomplished were trained.  Not only did MSU prepare their students for future careers, but they also prepared them for the social lives that they would inevitably lead.

Dining has never been the same since.  We still learn at our mealtimes, but more often it is about the newest cat video, not how to use different types of forks.