The Smithsonian National Museum of African American History and Culture is now open on the National Mall and represents a 100-year effort to establish a federal museum that explores African American life in in the United States. This blog discusses the second half of my visit during opening weekend. I try to focus on the artifacts used to tell these stories and how they contributed to the exhibits. The first half of my visit focused on the Slavery and Freedom period, our early arrival in North America through the Civil War. This blog focuses on the 20th century and highlights how the museum uses objects to complement quotes, pictures, sounds that account the Jim Crow, Civil Rights, and post-Civil Rights eras of the Black Experience. 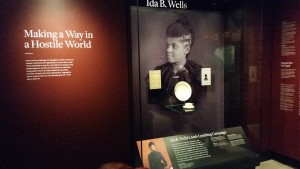 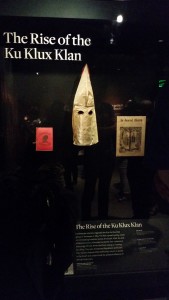 The Slavery and Freedom exhibit winds up a three story concourse on the western wall of the museum and relates accounts from African enslavement in West Africa all the way to contemporary movements of struggle and celebration of Black Americans. After the Civil War section discussed in my previous blog, visitors move up a ramp to the first half of the 20th century which incorporates religious, spiritual, class, and regional dynamics of collective and individual struggles for full citizenship. These items included a replica Clara Brown statue and cabin, a train car representing the Pullman Porters, one of Rosa Park’s dresses, a video/image bar top with bar stools that represented ‘sit-in’ from the 1950s, and a Klu Klux Klan hood. This section culminates with a room curated by Mamie Till, Emmett Till’s mother. The room is filled with pictures, videos, and sounds to create an experience of reflection and realization of the horrifying murder of Emmett Till. The room is arranged as a wake/funeral viewing of his original burial casket, with a reproduction of the Jet magazine photo of his mangled 14-year-old face. No photos or videos are allowed in this space so you are forced to confront the funeral space and what it means to you in the present moment. This space as a funeral wake, represents the tipping point from Jim Crow terror and the international movement for civil rights. 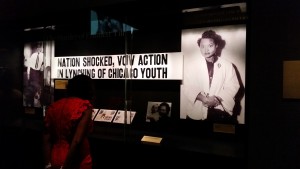 Visitors are then guided to the third level which represents the continuation of freedom struggles from the second half of 20th century to the present. It includes larger than life images of Angela Davis and pamphlets, books, and quotes from the numerous organizations and individuals involved in the fight for civil rights. There was a panel on Black Studies, a direct product of the civil and social movements of this era, and videos and images celebrating coalitions with other marginalized groups across the globe. It also includes objects from the successes 1980s and 1990s with Jesse Jackson buttons, set props from The Oprah Winfrey Show, and Michael Jackson award videos. The Slavery and Freedom exhibits concludes with celebrations of Barak Obama and one of First Lady Michelle’s inauguration dresses and inferences on the current climate of racial violence and struggles for freedom that continue today. 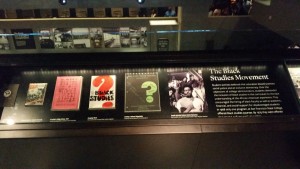 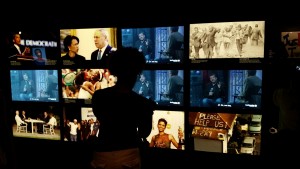 The upper two floors of the museum explore Black expressive culture; dance, cooking, and basket making. There is a section specifically dedicated to African American military service with regalia, year books, and letters from service people, various religious expressions including hats, staffs, and pews, and women’s movements garments and manifestos.  It includes videos and commentary on Black hair care products, musical, theatrical, and media productions, costumes, and merchandise. The artifacts on these floors signified the celebration of Black life and the fullness of our lives within this country. There were fewer objects from the 20th century as compared to the early time periods. Also, the later levels included more videos, images, and stories rather than objects. This resonates with archaeological issues around identifying racial or ethnic communities in the contemporary record, particularly when many items are pretty common among all groups. Clearly, it is very clear that ‘pots don’t equal people’ especially in 20th century America. However, context can help dis-aggregate the specific commodities from the specific social-cultural conditions we live through within our distinct racial and ethnic experiences. For example, there was a large display of very popular dolls, figurines, and memorabilia that exaggerates the phenotypic characteristics of African descendant people. The potential physical context for these items, their owners and even manufacturers may obscure their significance to Black experiences in this country. These dolls, even when found within non-Black contexts, need to be included in understanding the contemporary material objects that effect Black lives.  Thus when archaeologists are grappling with how life changed for African Americans in the historic period, the location of these dolls and other objects should not determine their full relevance within American history. The museum makes this point explicit by including both non-racialized and racialized objects within these exhibits for example the inclusion of this washboard to symbolize the washboard rebellion.

There is so much more to experience in the museum: the architecture, the water features, the porch and the cafeteria. The museum contextualizes seemingly mundane objects with videos, stories, and pictures and allow the most common modern objects to take on new meanings. The museum as a whole makes a strong contribution to the American stories weaved together on National Mall. The museum speaks of the celebrations of blackness, and offers the world a much needed glimpse into ‘a people’s journey’.