I just finished reading Noam Chomsky’s latest work, Who Rules the World this morning, As the craziness of this presidential election unfolds around us both the major party candidates share the dominant script of America the Exceptional. 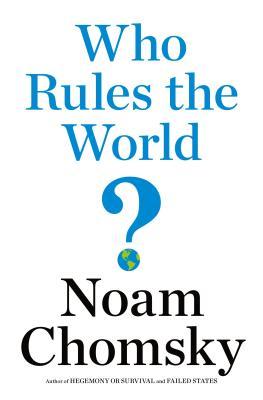 In fact, both not only wish to preserve and protect that image, but one would even expand it. Both candidates are bully on the War on Terrorism and see nothing that more military punch and power can’t fix. Neither willing to consider that perhaps that expansive military approach only accelerates that which they are attempting to end.

Chomsky’s work was completed before Mr. Trump had locked up the Republican nomination earlier this year. Nonetheless, all should read his heavily documented review (more than 629 cited references) of the forces alive in our world, their antecedents, and specifically the US actions that have nurtured the world we face together. Whether one disagrees with the complete analysis Chomsky offers, any reader would at least have to begin to be skeptical of the utterances of the dominant narrative that engulfs conservatives and liberals alike.

No one relishes reading about misdeeds of their home team. We might occasionally accept the idea that ‘one bad apple’ doesn’t spoil the whole bushel. Or that OK, no one is perfect (we hear that one a lot during this presidential campaign as supporters of both major candidates defend their support for their favored candidate). Chomsky challenges us to consider why the rest of the world thinks that the US is the “greatest threat” to world peace ( this reported in an international WIN/Gallop poll p.222). He constantly contrasts the myths we live in with the facts that display our utter blindness to the reality as others experience it.

Nowhere is this more evident than the use of the word ‘terrorist’. Chomsky, as he has written for decades, notes that we (US) use the term to describe the acts of those we disagree with (our enemies), but absolve any acts by us or our surrogates that have similar if not worse consequences for people outside our borders. So when we send a drone to take out someone we don’t like and blow away innocent civilians, that’s not terrorism but our right to defend ourselves. Yet when a Palestinian attacks an occupier in his own country, it’s terrorism. From the Vietnam War to the debacles in Libya and Syria, Chomsky shines the light on the hypocrisy.

This is hard to read as an American who wants us to live up to the vision of a just, compassionate democracy among democracies. It certainly cries for what Rabbi Michael Lerner so eloquently expressed in a blog this week, “American Politics: The U.S. Needs Repentance and Atonement“.

“We need a New Bottom Line of love and generosity that could reshape every dimension of our economic, political, cultural and spiritual assumptions about reality. To get there, we need a fundamental transformation of consciousness. Although not in the same league of outrage as what Trump has done to legitimate misogyny, racism, homophobia, Islamophobia, and xenophobia, the Democrats would also be challenged by a New Bottom Line–and even Hillary Clinton’s call for a “no fly zone” in Syria would have to be scrutinized against the alternative approach to foreign policy a New Bottom Line would suggest (namely, seeking homeland security through generosity and a Global Marshall Plan so that the US becomes known as the most generous and caring society in the world, not the toughest and most militarist).”

In another penetrating analysis of our current wave of political upheaval Charles Eisenstein actually finds a ray of hope in his “The Lid is Off.”

“Clinton and Trump are a product of their conditions, playing the “game of thrones” according to the secret rules of the insiders, in a system that has long allowed, encouraged, and in some ways nearly required hypocrisy. That system is coming to an end. We are entering by fits and starts an era of transparency in which, we may someday hope, secret rules and hypocrisy will have no purchase.”