It may seem unusual to dig up a pair of shoes, yet shoes are not totally uncommon on archaeological excavations. Just last week a report from Northumberland, England announced a find of more than 400 shoes discovered at the Roman fort of Vindolanda. Typically the entire shoe is not preserved, rather the leather from the soles or uppers, as well as any metal used for the lace rivets are what preserves. CAP has uncovered parts of shoes several times, including in the West Circle Privy, the Gunson trash pit, and excavations at west Beaumont Tower. However this summer, while working at Station Terrace we encountered a nearly complete pair of shoes near the bottom of the excavation unit. 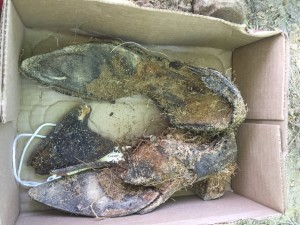 Shoes from Station Terrace after removal from excavation unit. Photo by Lisa Bright

You can learn a lot about fashion, gender, and even identity from shoes. Sure, you can get technical and talk about the way the shoe was crafted, is the outsole stitched, nailed, cemented, etc. But shoes can also inform us about changing gender perspectives as seen through fashion over time. 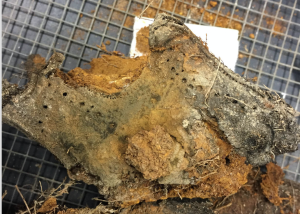 When the field crew was working to uncover and remove the shoes, they informed me that they had found a pair of women’s shoes. At first glance, it’s easy to see how they came to this conclusion. The pointed toe, the stacked heel, the decorative brogueing, and the loop style ties are typical of women’s shoes today. But these are not women’s shoes, these are a pair of men’s dress shoes. We needed to remember the context and time period of this particular site to properly identify these shoes. Station Terrace was used on campus from the early 1890s until 1924, and men’s fashion, specifically footwear, was very different during this period.   Based on the shape, style, and height/width of the heel these shoes were most likely produced in the the early 1900s (1900-1920). 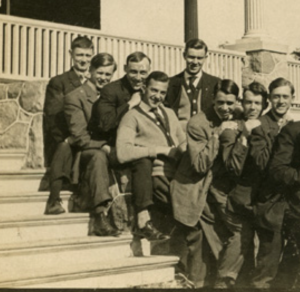 Closeup of men of Tr’e House circa 1908. Note the different styles of shoes. Photo courtesy of MSU Archives & Historical Collections 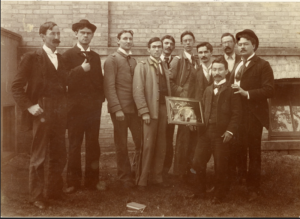 The Edwardian clothing era (named for England’s Prince Edward VII) was characterized by slight changes to the cuts of jackets, collar styles, and sport and fitness clothing. Men wore lose, plain, suits with wide lapels, called Sack suits (see the above image).  During the Edwardian era the shoes did change considerably from the Victorian era. Men’s shoes fell into three distinct categories; boots, oxfords, and pumps. Boots were designed for every day wear and traveling. They were often two tone, with a dark bottom half and white upper half designed to mimic a shoe spats. The oxford, typically used for business or work, is very similar to men’s dress shoes today. 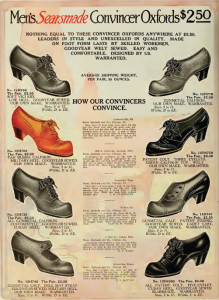 Men’s dress shoes are where perhaps the greatest variation from todays style occurs, for they were classified as pumps. Yes, pumps. In the Edwardian era, men’s formal dress shoes look like a hybrid of today’s men’s oxford and a women’s low-heeled flat. Typically they had the same stenciling (broqueing) details of an oxford, a high arch, and a 1-2 inch thick heel. It’s also important to remember that thin string shoelaces weren’t a thing yet. Shoes either buttoned, or were laced with a ½ inch wide silk ribbon and tied in a bow. You can even see these bows in the two historic pictures featured earlier in this post.

Today we may think that a 2 inch heel and bow are feminine, but it’s important to remember that cultural ideals of what is appropriate for a particular gender change through time. In fact, men’s shoes had high heels long before women’s shoes did. (See this article, or if you find yourself in Toronto stop by the Bata shoe museum’s exhibit “Standing Tall: The Curious History of Men in Heels”).

The teens marked the end of the Edwardian period (1890-1910). During the teens men’s fashion was heavily influenced by military apparel from WWI.

These shoes provide a unique glimpse into everyday life at Station Terrace.  Although we will never know why these shoes were left behind in the buildings basement, I’m glad they were.

Making Sense of a Little Piece of Leather: Behind the Scenes with the Shoemaker’s Apprentice