During the west circle historic privy excavation, 773 fragments of hurricane oil glass lamp shades were found. Lamps that use these shades are characterized by a wick dipped into the fuel source that would have been surrounded by a glass globe. Glass lamps may initially seem like a fairly routine find, which of course they are to an extent. But, consider the role of electricity in your own life. Now, imagine what studying must have been like in a small dorm room with the only light coming from an oil lamp! Clearly the students’ all-nighters would have been interrupted by the tending of the lamps. 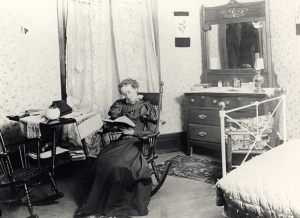 Female student in dorm room 1896 – oil lamp can been seen on her dresser. Image courtesy of MSU Archives & Historical Collections

The rules of the Michigan Agricultural College from 1868 clearly state that, “Filling a lamp with kerosene when it is burning, or in the evening or night is forbidden under penalty of suspension or expulsion.” However, as we know from the presence of clay pipes and alcohol bottles found in campus excavations, students often subverted the rules. I imagine many a lamp was kept burning as students hurriedly tried to get through the material they needed to know for a tough botany or chemistry course. Though the early campus buildings were constructed of mixed materials, the rules regarding lamps were clearly designed to cut down on fire hazards in dorm rooms. 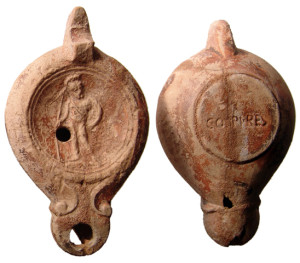 There is archaeological evidence for the use of oil-lamps for thousands of years, while the kerosene-fueled lamp was introduced around 1850 (1). Ancient Romans used lamps made of stone, shell, or ceramics and fueled by the abundantly available olive oil (2-3). Oil lamps appear in Jewish, Islamic, Hindu, and Christian texts, usually referencing lighting some spiritual way or the light as a source of direction (1).

I am sure we are all very grateful for the widely available electricity we enjoy today, but in other rural parts of the world kerosene lamps are still used today where electricity is too expensive or inaccessible. Kerosene as a fuel source rivals even the amount of U.S. jet fuel consumption per year! While kerosene lamps like the ones found on campus consume about 77 billion liters of fuel per year, the U.S. airlines report usage of about 76 billion liters of jet fuel per year (4).

Interestingly, CAP has only found oil lamps at the sites of the historic privy (associated with Saints’ Rest) and the site of Beaumont West which is associated with College Hall. These locations make sense as students would have been occupying these spaces after the sun went down. Recently, the City of Boston Archaeology Program (5) located a complete oil lamp at the bottom of a privy dated to 1835. CAP has had no such luck with finding an intact lamp, which is not unexpected since one careless knock into a table could have sent a lamp flying and glass shattering. We have been able to reconstruct some of the lamp shade fragments, but their presence in the privy associated with the old dormitory lends credence to the idea that the lamps ended up here due to breakage. Perhaps it was all to common for students at Saints Rest to make their trip back to the dorm in the dark, after accidentally breaking a lamp shade, and hiding the evidence down the privy shaft.