As I have been going through the purchasing records for the Agricultural Boarding Hall at the MSU Archives, I’ve noticed some interesting purchases that I did not expect to run across. These are the purchasing notes for imported fish, including Lake Superior Whitefish and Halibut. I am particularly interested in the importation of the Lake Superior Whitefish because I grew up in the Upper Peninsula of Michigan, right across the street from Lake Superior. Growing up in Marquette Michigan, Lake Superior Whitefish was a staple in our house and is very common at local restaurants in town. I was surprised to find it purchased by Michigan State during the Early Period! The archival records show that during the 1860s, not only was MSU was purchasing Lake Superior Whitefish, but that they were doing it throughout the year. During the Early Period of MSU (1855-1870), I was expecting that almost all food resources that MSU utilized would be local, because of the difficult nature of transporting more exotic/distant food. To be able to transport fish from Lake Superior to MSU, the fish would have to be either transported on ice (more difficult to do during the summer months) or they would have been salted to preserve them. 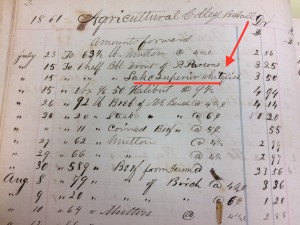 Before I dive into the history of fishing on Lake Superior, here is a quick background information on Lake Superior Whitefish. Lake Superior whitefish are a member of the trout/salmon family (Salmonidae). The reason whitefish were and still are such a popular fish is due to its tasty flavor, convenient size, and their habit of schooling that allows for easier mass catching (DNR). Whitefish hatch in the spring, and grow rapidly, allowing them to reach over 20 pounds and can live over 25 years (DNR).

Fishing for Lake Superior Whitefish has a long history in the state, and commercial fishing on Lake Superior has had some major changes throughout Michigan’s history (Goniea DNR; Minnesota Sea Grant). Small steamer ships are no longer required for transporting fish to the market (Holmquist 1955). Now it is possible to drive the fish catch downstate along the highways throughout Michigan, many of which follow the Great Lake shorelines. One part of commercial fishing that has not changed is the most common method of fishing: gill nets. However, there are now different laws that govern the size of the mesh used by fishermen as well as fishing seasons (Holmquist 1955). 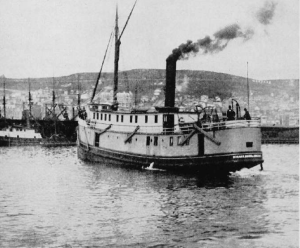 Through the 1890s, whitefish were the most popular/mainstay within the Lake Superior commercial fishing, but through the early 1900s, the species almost became extinct. Now with the help of more restrictive fishing methods and artificial propagation, whitefish populations are at adequate levels for commercial fishing once again (Holmquist 1955). According to Holmquist (1955) a second attempt of large-scale fishing on Lake Superior occurring around 1860, when a commercial operation was opened at Whitefish Point in the Upper Peninsula of Michigan. It is possible that this push in commercial fishing during this time influenced Michigan State’s purchasing of imported fish in addition to the more typical local resources. 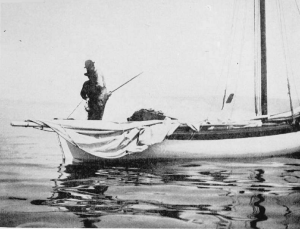 Fishermen in a Mackinaw boat raising their nets. Image Source

While MSU farms and local businesses provided the majority of the food resources consumed by campus residents during the Early Period, it has been exciting to learn about the non-local resources that are being purchased for the boarding halls. While the purchasing of Lake Superior whitefish does not appear to be a constant throughout the 1860s (archival records indicate sporadic purchasing during three separate years), it is interesting that there was an inclusion of food that would have been more difficult to acquire. Students and faculty were treated to a more varied diet than what their local surroundings could produce. The purchasing of Lake Superior whitefish during this time shows the appreciation of great resources and the wonder of the Upper Peninsula before the building of the Mackinaw Bridge!

Commercial Fishing on Lake Superior in the 1890s by June Drenning Holmquist (1955): http://collections.mnhs.org/MNHistoryMagazine/articles/34/v34i06p243-249.pdf