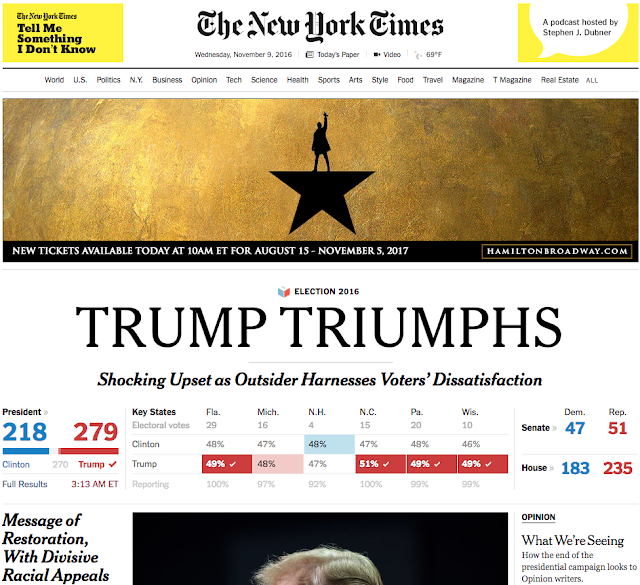 Trump coverage on this blog. My advice: take Trump seriously, but not literally. The media and the left took him literally but not seriously.

Trump on Trump: Playboy interview from 1990.

Crazy like a Fox: Matt Taibbi in Rolling Stone.

It turns out we let our electoral process devolve into something so fake and dysfunctional that any half-bright con man with the stones to try it could walk right through the front door and tear it to shreds on the first go.

And Trump is no half-bright con man, either. He’s way better than average. …

Trump: “The war in Iraq was a big f … fat mistake, all right?” he snorted. He nearly said, “A big fucking mistake.” He added that the George W. Bush administration lied before the war about Iraq having WMDs and that we spent $2 trillion basically for nothing.

Trump on carried interest and hedge funds: “They didn’t build this country.”

“The hedge fund guys didn’t build this country. These are guys that shift paper around and they get lucky.” He went on: “They’re energetic, they’re very smart. But a lot of them, it’s like they’re paper pushers. They make a fortune, they pay no tax… The hedge funds guys are getting away with murder.”

Foo Camp 2016: A Silicon Valley startup engineer from a working class white background told me about his family and the friends he grew up with in Ohio — “Trump is going to win and it isn’t going to be close.”

I ran a session TRUMP 2016? CAN IT HAPPEN HERE? (a few people in the session caught the Sinclair Lewis reference) to get a feel for whether the tech community understands what’s happening in our country. At another meeting earlier in the year I concluded

Everything at this meeting is off the record, so I can’t say much about it. The one comment I’ll make is that among this group of elites almost no one I’ve spoken to groks Trump or his appeal to a large number of Americans.

Donald J. Trump is going to win in November. This wretched, ignorant, dangerous part-time clown and full time sociopath is going to be our next president. President Trump. Go ahead and say the words, ‘cause you’ll be saying them for the next four years: “PRESIDENT TRUMP.”