Thanksgiving marks the beginning of the long winter holiday season, and as we don our elastic-wasted pants and prepare to eat until we hate ourselves, there seems no better time to, once again, talk about food. As you sit down to your holiday meal this week, take some time to think about the food traditionally served at Thanksgiving. Some of the signature dishes include items such as cranberries, yams, apples, squashes, and pumpkins. These are late-autumn harvest foods, and they demonstrate how deeply food traditions are embedded in the seasonality. 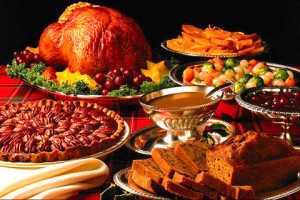 What is seasonality, you may ask? The term refers to foods, usually fruits and vegetables, that are only available during the season of the year in which they ripen or are harvested. In our modern world of industrialized agriculture and global markets, it is easy to forget that people were once at the mercy of the nature for their food. In the past, fresh fruits and vegetables were not available all year round like many types of produce are now. Today, once-seasonal foods can now be grown in climates that produce year-round or in specialized greenhouses, and then distributed across the world via modern transportation. That’s not to say that we are not completely unaffected by seasonality, but societies in the past, including the early MSU population, were affected by it to a much greater degree. 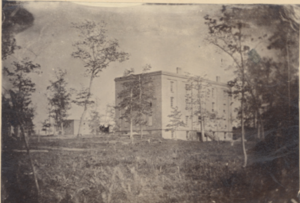 During MSU’s Early Period (1855-1870), the boarding houses, or dining halls, faced the challenge of feeding hundreds of students based on the availability of local resources. Routinely transporting foods in from long distances would likely have been generally too difficult and costly during most of this early period. A report from 1874 notes that there was a railroad to Lansing but none to campus, and all roads leading into campus were very poor. Therefore, acquiring food from MSU’s own fields, gardens, and livestock, and purchasing additional foodstuffs from local farmers and stores would have been the preferred and necessary means by which to procure food.

I and other CAP fellows have been mining account books from the early days of the college and boarding halls to determine early food purchasing habits. In three separate receipt books, all spanning the general time frame between 1866 and 1874 (which captures the end of the Early Period and the beginning of the Expansion Period), food seasonality patterns become strongly apparent.

The boarding house bought berries exclusively between July and September, while cherries are purchased almost every year, only in the month of July. Other summer items purchased only in summer months include plums, tomatoes, beets, radishes, summer squash, and salsify, a root vegetable that tastes like oysters (what a treat!). Grapes and pears, which are available in the fall, were both purchased in November, and turnips, and autumnal vegetable indeed, were procured in August and September. Dried fruit, dried apples, and dried peaches, however, were purchased mostly between February and April, although dried peaches were also bought in July. Therefore in the absence of fresh fruit, it seems dried alternatives were sought to supplement the daily nutrition of students and faculty. 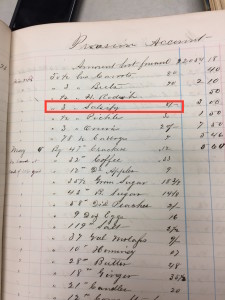 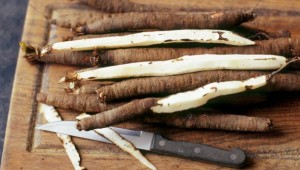 Salsify. Sadly, it does not instantly turn things into salsa. Image source

Other seasonal items were also noted in the account books. Maple syrup was purchased in March and April, when sap would be flowing freely through the Michigan maple trees. MSU diners happily guzzled down cider as the apples ripened and the weather turned chilly from September to November. And of course, MSU maintained holiday traditions as well. Pumpkins were bought annually in October, either for decoration or consumption, and large numbers of turkeys were procured in November. Even our earliest students were lulled into tryptophan comas following their Thanksgiving feasts.

So let us follow in the footsteps of our predecessors and dine upon the season’s ripest and most delectable comestibles. Let the starch of yams and squashes fill our bellies, the juice of cranberries stain our tongues, and the grease of turkey glisten upon our hands and faces. ‘Tis the season, the season for eating!