I don’t know whether this will replicate, but if the result holds up it is quite interesting. The higher degree of variability in criminal faces is fascinating. It suggests somewhat rare genetic variants of negative effect on behavior and cognition, with pleiotropic effects on facial morphology. Facial morphology is almost entirely heritable (see, e.g., identical twins).

We study, for the first time, automated inference on criminality based solely on still face images. Via supervised machine learning, we build four classifiers (logistic regression, KNN, SVM, CNN) using facial images of 1856 real persons controlled for race, gender, age and facial expressions, nearly half of whom were convicted criminals, for discriminating between criminals and non-criminals. All four classifiers perform consistently well and produce evidence for the validity of automated face-induced inference on criminality, despite the historical controversy surrounding the topic. Also, we find some discriminating structural features for predicting criminality, such as lip curvature, eye inner corner distance, and the so-called nose-mouth angle. Above all, the most important discovery of this research is that criminal and non-criminal face images populate two quite distinctive manifolds. The variation among criminal faces is significantly greater than that of the non-criminal faces. The two manifolds consisting of criminal and non-criminal faces appear to be concentric, with the non-criminal manifold lying in the kernel with a smaller span, exhibiting a law of normality for faces of non-criminals. In other words, the faces of general law-biding public have a greater degree of resemblance compared with the faces of criminals, or criminals have a higher degree of dissimilarity in facial appearance than normal people. 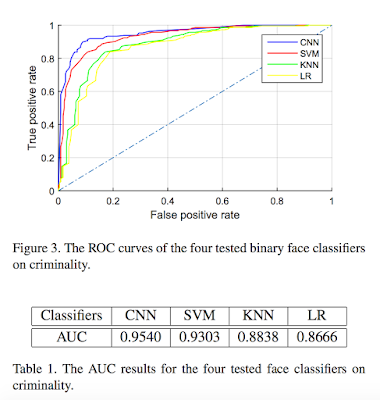 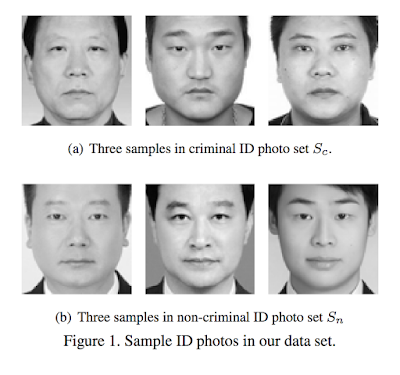