What is zooarchaeology and how is it actually done? This is a question that I get a lot when I talk about my research. Zooarchaeology is the study of non-human animal remains; specifically this involves the identification of animal species from archaeological contexts. However, it’s not as simple as just looking at a bone and easily knowing what it is right away! Typically, within archaeological contexts, animal bones are highly fragmented, leaving the zooarchaeologist with small pieces of an animal skeletal element. This fragmentation could be from both human and natural processes including: the butchering process, disposal practices, trampling, exposure to scavenging animals, and/or weathering. 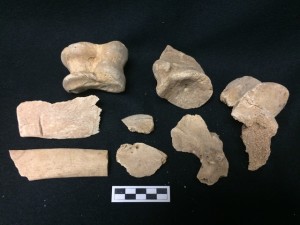 After the animal bones are sorted by class, the next step is to sort them by skeletal element (if possible). These first two steps allow for easier use of comparative collections for specific identifications.

Zooarchaeologists then take the sorted animal remains one item at a time, and based off of their initial evaluations compare each bone to the bones of previously identified species within the comparative collection. For example, if I have a bone that is thicker and/or larger than most of my mammal animal remains from a prehistoric archaeological site that is located in an area that has a lot of white-tail deer (Odocoileus virginianus), I would start by looking at the deer comparative skeleton to identify the bone. 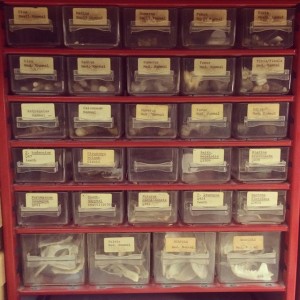 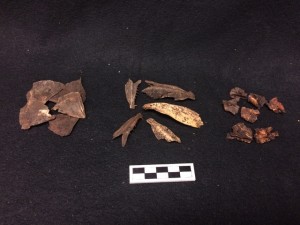 Assortment of fish bone from the West Circle Privy

Currently, I am in the process of pulling out the animal bones recovered during the Campus Archaeology excavations of site from the Early Period of MSU’s history (1855-1870). Below are some photos of the bones that I will be analyzing in the coming months!

With these identifications, we are able to estimate the number of individuals that are found, the seasonality of the resources exploited, meat cuts based off of butchering methods, or even how different pieces of meat from the same animal are distributed. Stay tuned to learn about the results of the animal bone analysis and the methods we use to make our interpretations!