I read this passage the other morning. It’s from a book I wasn’t looking for when we were browsing through the many floors of used books at one of the great used bookstores in the world, John K. King’s in Detroit. 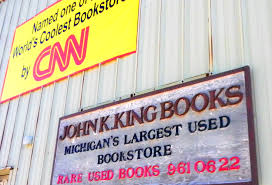 “Without some notion of brotherhood, civilization, indeed the very life of the race, would have been impossible. But, through the ages, the idea of brotherhood has generally been restricted to members of the same family, tribe, nation or race, or believers in the same religious or political creed. There will always be a particular sense of fellowship resting upon common loyalties. But today the peace, and certainly the happiness, of the world requires a larger and more inclusive sense of brotherhood for all the sons and daughters of earth…This brotherhood must take account of the existence of important differences of opinion. Its emphasis must not lie on imposed unity of thought, but on a common abhorrence of cruelty, oppression, and everything that would reduce human life to the status of a commodity and man himself to the level of a thing.”

One of the reasons I believe it struck me enough to mark the page so I could go back and copy the quote, was that I have been reading more and more about efforts to end war, to create some vibrant form of global governance, and also reforming the United Nations. The issues we face, especially on a single finite planet that is both increasing in human numbers but even more so human impacts, requires us for survival to work together. To find in Thomas’s words from more than 60 years ago “a larger and more inclusive sense of brotherhood for all the sons and daughters of earth.”

I find it hard to imagine given those increasing challenges that only one year ago all 193 nations of the United Nations agreed on a need and commitment to reduce greenhouse gases for the betterment of all. And yet one year later, we have an election where the purported winner and his nominees are collectively hoping to unravel that essential foundation for a less troubling future. Mr. Trump’s erratic hyper-individualism that he hopes to impose on our nation, if not the world, is truly in this writer’s mind the most troubling of the results.

If it was simply himself, and we could hope that the democracy once created could work to constrain his excesses, perhaps we might survive his worse inclinations. But so far, I am seeing very little from the governance sector, save a few lonely Democrats, joined by sincere libertarians like Sen. Rand Paul, who dare confront this demagogue. This fear of confrontation, of standing up for what one believes, especially permeates the Republican Party with unfortunately rare exception, even at local government levels.

If we believe that Thomas had it right, and I certainly do, it is up to us to stand up for building and strengthening that sense of global brotherhood and sisterhood. The initial nominees of the president-elect are of course not only from the well-connected club of wealthy insiders, so much for “cleaning the swamp”, but they are of a view that governance is bad, unless of course it profits a business they support. The reports of conversations that the president-elect has had with other national leaders shows he is still seeking advantage for his business ties, either directly his own, or for his ‘friends’.

I am not optimistic about the next four years, but there is so much that we cannot predict, although we’re pretty certain climate as we have known it for thousands of years will continue to destabilize. Perhaps one of our finest writers and thinkers Rebecca Solnit says it best.

“When big changes and dangers arise, you have to think big. You don’t put out a forest fire with a glass of water. Thinking small can prevent you from even recognizing trouble, let alone your options for overcoming it. There’s never been a time when thinking big matters more than now. Many across the United States are now trying to figure out how to survive Trump, but it may still be possible to stop him. His regime is not yet inevitable.

It’s a long shot, but one worth trying, the way someone diagnosed with a disease with a 3% survival rate might want to do what it takes to try to be part of the 3%. You don’t get there if you give up at the outset. Trump represents a catastrophe on a scale many seem to have trouble grasping, an attack on what remains democratic and uncorrupted in our old and messy system of government, a threat to international stability, to efforts to address climate change, and to human rights at home and around the world.”