The mental model is Shenzhen: a city that barely existed 25 years ago, across the border from Hong Kong. Population today: 10 million.

Bloomberg: The landscaped lawns and flowering shrubs of Country Garden Holdings Co.’s huge property showroom in southern Malaysia end abruptly at a small wire fence. Beyond, a desert of dirt stretches into the distance, filled with cranes and piling towers that the Chinese developer is using to build a $100 billion city in the sea.

While Chinese home buyers have sent prices soaring from Vancouver to Sydney, in this corner of Southeast Asia it’s China’s developers that are swamping the market, pushing prices lower with a glut of hundreds of thousands of new homes. They’re betting that the city of Johor Bahru, bordering Singapore, will eventually become the next Shenzhen.

“These Chinese players build by the thousands at one go, and they scare the hell out of everybody,” said Siva Shanker, head of investments at Axis-REIT Managers Bhd. and a former president of the Malaysian Institute of Estate Agents. “God only knows who is going to buy all these units, and when it’s completed, the bigger question is, who is going to stay in them?”

The Chinese companies have come to Malaysia as growth in many of their home cities is slowing, forcing some of the world’s biggest builders to look abroad to keep erecting the giant residential complexes that sprouted across China during the boom years. They found a prime spot in this special economic zone, three times the size of Singapore, on the southern tip of the Asian mainland. …

A decade ago, Malaysia decided to leverage Singapore’s success by building the Iskandar zone across the causeway that connects the two countries. It was modeled on Shenzhen, the neighbor of Hong Kong that grew from a fishing village to a city of 10 million people in three decades. Malaysian sovereign fund Khazanah Nasional Bhd. unveiled a 20-year plan in 2006 that required a total investment of 383 billion ringgit ($87 billion).

Singapore’s high costs and property prices encouraged some companies to relocate to Iskandar, while JB’s shopping malls and amusement parks have become a favorite for day-tripping Singaporeans. In the old city center, young Malaysians hang out in cafes and ice cream parlors on hipster street Jalan Dhoby, where the inflow of new money is refurbishing the colonial-era shophouses. … 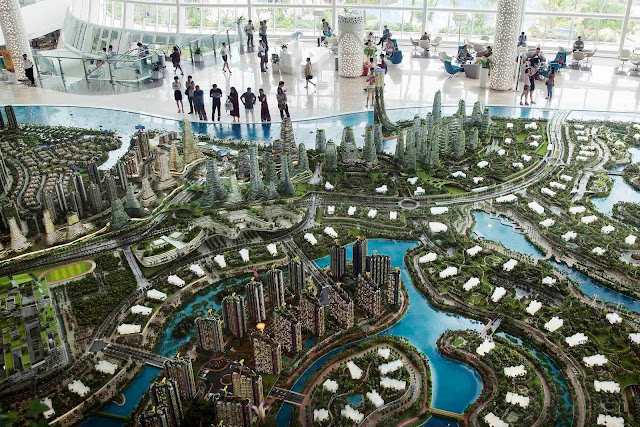