In my last blog I introduced the female employees working at the Saint’s Rest boarding hall in 1866. These 33 women were paid an average of $2.00 – $2.50 a week for their work and were purchasing personal items through the university, charged against their monthly pay. Their purchases don’t appear to be work related; rather they are personal in nature. So let’s take a moment to further examine what these women were buying. 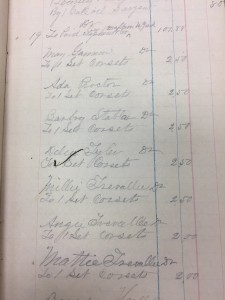 Corsets were the first things that caught my eye in these boarding hall purchasing records. On April 19th, 1866 seven of the women purchases corsets at a cost of $2.50 each. That’s an entire week’s pay!

Today wearing a corset may seem odd (although in some circles they are making a comeback) but the 1860s were at the height of the Victorian era (1837-1901), when corset wearing wasn’t just the norm, but was expected of women in order to obtain an ideal form. Because some of the women were also separately purchasing whalebone (at $0.15 a piece), we can deduce that they were not purchasing corsets with pre-weaved boning, which became popular (but more expensive) in the 1860s. 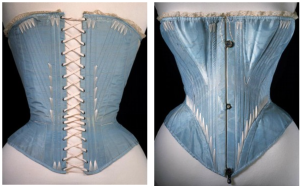 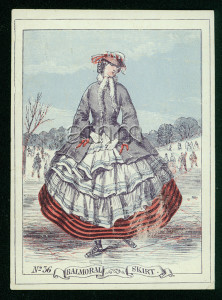 In May of 1866 Millie Trevallee purchased a balmoral skirt for the whopping price of $5.75. A balmoral skirt, or petticoat, is worn over a hoop skirt. There are several entries for girls purchasing hoop skirts. A hoop skirt gave the structural component to the large full dress skirts in fashion during this era. A balmoral petticoat was made of colored or patterned fabric and intended to show at the bottom of a dress. The most common type of Balmoral skirt was made of red wool with 2-4 black stripes running around the hem. In the late 1860s other patterns became popular as the trend spread through different levels of society.

Sewing machine invented in the early 1850s lead to mass production of clothing. However, due to the amount of raw fabric being purchased, it’s likely that these women were making their own clothing. The rural nature of the area, and their socio-economic status may explain the lack of pre-made clothing. The kitchen girls were purchasing muslin, printed fabric ( such as gingham), cotton fabric, ladies cloth (a lightweight multipurpose fabric), bishop lawn (light weight slightly blue cotton fabric), silk, and a variety of colored fabric (such as pink and purple). They also purchased trim, ruffling, buttons, and hook and eye closures. 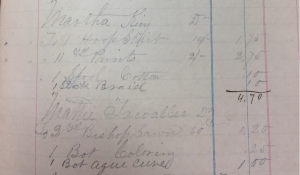 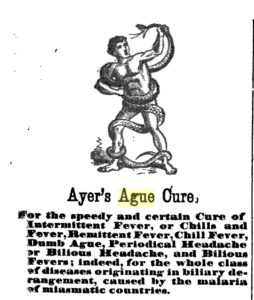 Most of the entries related to health purchases are vague such as pills, “Doctor Bill”, “Paid to Dentist”, or “1 chicken for Mary Bage (sick)”. However a few purchases give us a glimpse into the medical issues and treatments of the time. Several women made purchases of iron tinctures, quinine, and Ague Cure. The iron tincture is a bit more straightforward than the quinine and Ague Cure. Today quinine may only sound familiar to as an ingredient in tonic (it’s what gives tonic it’s bitter flavor), but historically this was used to treat malaria and other ailments. Since malaria isn’t exactly common place in Lansing, it’s more likely that Ada was using it for one of it’s other purpose – such as treating a fever of another cause. The Ague Cure she also purchased in June was also used for fever and chills, known commonly as “malarial disorders”.

This is not a complete list of the items purchased by the female employees, but they are perhaps the most interesting.  Although clothing related purchases dominate the 1866 record they were also incurring expenses for mending shoes, purchasing stamps, and travel.  These account books have provided a rare glimpse into the everyday lives of early female university employees.  They have also allowed us to begin to understand part campus history that we have not yet uncovered in the archaeology of campus.