Last semester I focused much of my attention on the account books from the boarding halls (i.e, dining halls) during the Early Period of MSU history. The books cover a period from 1866 to 1874, during which the school was known as the State Agricultural College. While I have written about some of the information gleaned from these books (check them out here and here), below are some final themes and observations: 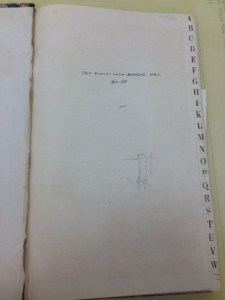 Example of A Boarding Hall Accounting Book (this is Vol. 108 listed in my references – says it goes until 1869 but actually goes to 1871). Image courtesy of MSU Archives & Historical Collections

Today, MSU faces the challenge of keeping its many cafeterias and coffee shops stocked with enough food to feed 40,000 students on a daily basis. While this is quite a feat, they have the advantage of modern transportation and bulk food suppliers to make the task a bit easier. Although the student population was much smaller in the nineteenth century, it must have been a great challenge for the State Agricultural College to acquire the amount of food needed to feed the students and faculty, considering the limited amount of transportation available in and out of East Lansing at the time. Railroads reached Lansing by at least the 1860s, but all roads leading into campus/East Lansing were reportedly very poor, making the delivery of goods from town an unsavory task for horses and wagons (UA.17.107 F10 B2410). However, certain items were ordered via mail or train, such as teas and extracts, which are always noted to have the added expense of “express”. The first direct railroad line between Detroit and Lansing opened up in August of 1871 (MDOT 2014), and the first mention of food items being purchased occurred in April of 1872, when “express on extracts from Detroit” was paid. By early 1873, “freight from Detroit” was a very common listing amongst provisions purchases, indicating a change in the ways in which food was being procured and perhaps even influencing the types of foods being selected. “Fresh fish from Detroit” became increasingly more common after this time as well.

Fry Me an Egg and Butter My Biscuit:

Much of what is listed in the account books is eggs and butter. Eggs and butter. Butter and eggs. Over and over again. It’s obvious that these items were important ingredients for the boarding hall cooks. Sometimes the accountant listed the people from whom butter and eggs were purchased, usually the names of individuals. The college therefore had to coordinate with various local farmers and producers to procure enough eggs and butter to feed hundreds of students and faculty. In May of 1871, one account book (UA 107.17 Vol. 32) lists payments for 273 pounds of butter and for 246 dozen eggs! Can you feel your arteries clogging?

Self-Sustainability at the Agricultural College

While it might be assumed that an agricultural college would produce a lot of its own food, evidence of this in the account books is sparse. Not until 1871 does one account book specifically list vegetables purchased from the “garden” (and later the Horticulture Department). Garden purchases include items such beets, parsnips, salsify, pickles, onions, cabbage, and carrots (UA 17.107, Vol. 32). In 1872 they begin listing purchases of meat and milk from the Farm Department. The boarding hall bought 6838 lbs. (795 gallons) of milk from the MAC farm in June of 1872 alone! It must be assumed that the boarding hall was acquiring food from the Horticulture and Farm Departments prior to this date, but did not record these as monetary transactions prior to the school’s expansion post-1870. Therefore, while food needed to be purchased from sources outside of the college, it was partially self-sustaining. In 1872, Beal himself mentions that crops in garden did well and were used in the boarding halls, but that the “orchards and fruit gardens are a disgrace to the Agricultural College” (UA 17.4, B891, F16). Records we found from 1863 indicated plans for a pear orchard on campus (UA 17.107, F2412,) – this was evidently not very successful.

So…What Else Were They Buying? 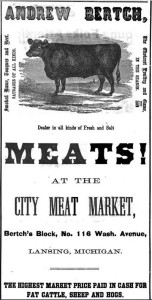 While the account books give us good information about the types of raw foods being purchased, there are a lot of specifics that get left out because of the nature of the account book listings. Meat was purchased almost exclusively from a butcher named A. Bertch – he was billed monthly but the types of meats purchased are usually not listed. Some individual meat purchases were recorded – veal, beef, mutton, and pork were all offered on the boarding hall menu at some point or another. Flour was purchased in bulk from vendors like Thoman & Co. and Reitz & Beiderslatt. “Groceries” were obtained from the grocers E.B. Miller and J. Esselstyne & Son, and the details of the items within those bulk purchases are lost to time.

It’s clear from these books that some foods were reserved for special occasions or came at too high a price to buy in bulk for students. President Abbot purchased beef steak, veal, and oysters through the college account (UA 17.107, Vol. 32), all items that do not frequently appear in the books otherwise. Canned oysters were purchased for students only occasionally: “oysters and jelly for commencement” and “18 cans of oysters, supper for students, Week of Fires” both show up in 1871 (UA 17.107, Vol. 32). Who knew canned oysters were such a special treat? 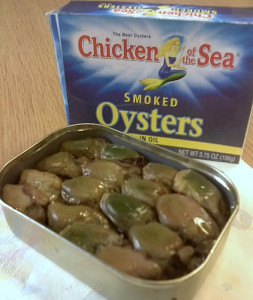 Ultimately, the account books have given us a good idea of the types of foods being purchased and consumed. While the types of food chosen for consumption are strongly tied to culture, so too are methods of food preparation and dishes/recipes – all of it is part of cuisine, or food culture. In the coming weeks I will be exploring what dishes were prepared from the ingredients that were purchased—as well as how these dishes were received by the students.