The analysis of animal bones from historic MSU involves more than the identification of species. While it is important to determine the species that were being consumed, we are also very interested in the specific portions of animals that were being purchased and produced by MSU. Not only was MSU purchasing meat from local vendors, but, as an agricultural school, they also were butchering animals raised on campus. It is possible to determine what cuts of meat were being produced and consumed on campus from analyzing the faunal material uncovered during archaeological excavations. However, there is an added level of difficulty in this type of analysis. While animals were being butchered on campus, they were not being processed by professionals. Instead, MSU students were being trained on how to butcher and process meat from the campus farms. How do we know this you ask? Well, there are photographs in the MSU archives that show the butchering of animals, but we can also learn from studying the animal bones themselves. They allow us to see the many different cuts and angles present that suggest that the individual who was processing the meat was learning where and how to make specific types of cuts (AKA like student drivers, student butchers could not stay in their lane). 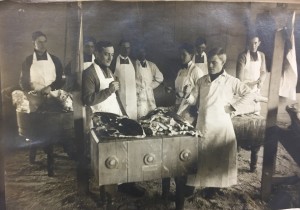 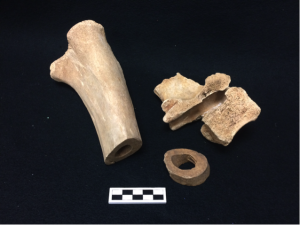 So how can we tell different meat cuts apart by looking at the animal bones? Not only can we talk to current butchers, there are countless books on the subject going back through time for butchering processes and preferred cuts. Below are some images that depict various meat cuts on different animal species. Through comparisons between the actual bones recovered and the illustrations of the types of bones that are the result of different cuts of meat, we can figure out what types of meat cuts were the most preferred on campus at the time. 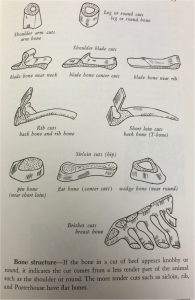 Another factor that needs to be considered while conducting this type of analysis is the preference for specific meat cuts through time and by region throughout the United States and the world! Even today there are certain types of meat that are very popular in one area of the United States, but that cannot be found in another. For example, tri-tip in California is a very popular cut of beef from the bottom sirloin for barbecuing, however, in the Midwest, it is almost impossible to find in a grocery store! However, by understanding the skeletal anatomy of each species, archaeologists are able to determine what types of meat cuts were being produced and/or consumed during the Early Period of MSU’s history. 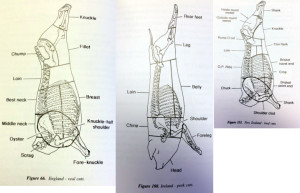 Different butchering techniques and cuts of meat from around the world. Image source: Swatland 2000

Using all of this information, I will continue working on the faunal analysis from the Early Period of MSU’s history. After the faunal (animal) bone analysis is complete, I will be able to compare the meat cuts found within the archaeological record to the meat cuts listed within the MSU Archives detailing the purchasing records for the boarding halls.