While ceramics from the Early Period of Michigan State were primarily inexpensive, simple, and durable institutional wares, assemblages changed along with the campus.  One of the main changes to take place was the increased number of delicate and stylishly decorated serving dishes, some of them made of porcelain.  Porcelain was a highly sought after ware type that was expensive to buy and considered a status item by many elite of the day.  Its value was based both in its technical prowess and its history.

To make porcelain, it requires relatively pure white-firing clay, ground quartz, and something known as a flux, usually a type of rock composed largely of feldspar.  These three substances are mixed with water and used to form the shape of the vessel.  Once the vessel is ready, it then must be fired to a temperature somewhere between 1280°C and 1400°C, hotter than any other type of ceramic ware.  When fired to this temperature, the feldspar in the flux melts and mixes with other minerals, creating a glassy ceramic body that is hard and translucent.  While this might not sound too hard given our knowledge of modern technology, it is actually quite difficult!  In order to make porcelain, not only did potters have to find the correct combination of materials, but they also had to invent new firing technology that could hold enough heat to correctly fire porcelain.  This required immense knowledge, skill, and trial-and-error, as people who first produced porcelain did not have machines who could characterize raw materials for them, process and purify those materials, regulate the temperature and environment within their kilns, or even paint the intricate designs for them.  Overall, porcelain wares were the most complex and difficult to make vessels during this time and were considered the height of ceramic technology.  For much of their history, access to them was also difficult. 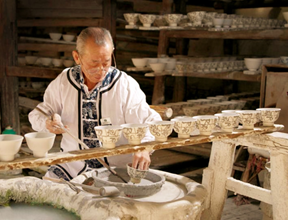 True porcelain was first made by Chinese potters at Jingdezhen in the 13th century.  While proto-porcelain or porcelain-like wares had been made in China for centuries, the characteristic hardness and translucency of true porcelain was developed at that time.  Shortly after its invention, porcelain became a valuable commodity, but like all ceramics, it was difficult to transport over land.  Vessels were sometimes large, always fragile, and when packed together for transport, could weight quite a lot, so porcelain was not a great item for the major over-land transportation routes of this time, such as the Silk Road.  As such, Chinese proto-porcelain and porcelain were not widely traded until maritime trade in the region expanded.

Once maritime trade increased, porcelain became hugely popular in many areas, including Korea, Japan, the Philippines, India, and farther west toward the Middle East.  The trade for Chinese porcelain became so popular in these regions that it had dramatic effects.  In the Philippines, it was quickly incorporated as a prestige item and as an object of cosmological and spiritual importance, so much so that many local potters could not compete, devastating local pottery traditions.  In Korea, potters were able to recreate the process of making porcelain, allowing them to emulate Chinese ceramics.  For the Japanese, porcelain was so valuable a commodity that during an invasion of the Korean Peninsula they targeted Korean pottery workshops in order to capture potters who knew the secret of porcelain-making so that they could begin production for themselves.  Chinese porcelain was also influenced by others, as Chinese potters borrowed the innovations of Persian potters with cobalt to make the blue decorations used on world famous blue-on-white Ming Dynasty porcelain. 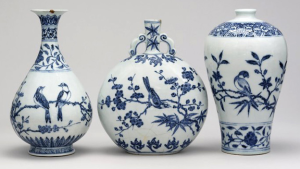 Portuguese traders in the early 16th century were the first to bring Chinese porcelain back to Europe.  At this time, the flow of porcelain to Europe was very slow and most pieces ended up in the hands of the aristocracy.  It was not until the early 17th century, when the Dutch were able to begin importing large amounts of Chinese porcelain in the form of dishes and display objects, that it became a major commodity for a larger portion of European society.  This popularity was aided by a few factors.  First, foodways in Europe were changing at this time, as drinks like tea and coffee became more popular.  Communal dining also was declining in popularity, especially for those who could afford the dishes necessary for individualized dining settings.  Both of these changes necessitated new dishware.  The fact that the first porcelain shipments all ended up in royal and aristocratic hands also helped increase the popularity of porcelain, as it was seen as a great marker of status and wealth, one required for all those wanting to demonstrate that they belonged in elite circles. 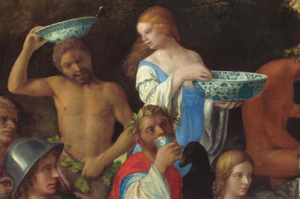 While porcelain was widely popular with the upper classes in Europe, it was still an expensive import that many could not afford.  For instance, a set of personalized porcelain dishes typical of those desired by the elite cost over 10 times the amount of an ordinary setting.  It is no surprise that shortly after a market for Chinese porcelain was established in Europe, European pottery makers began experimenting with porcelain production.  One of the first pottery workshops to produce European made porcelain was funded by the Medici family in Italy during the late 16th century.  While they were able to produce porcelain, it was a type of “soft-paste” porcelain, which had similar translucent properties but was not as strong as Chinese porcelain, which is considered to be a “hard-paste” ware.  It was not until 1708 in Saxony that a method to make “hard-paste” porcelain in Europe was developed.  A major workshop in Meissen was quickly opened for production and China lost its world monopoly on the production of high-quality porcelain.  While Europeans could now buy locally-made porcelain for their homes, Chinese imports were still highly desired symbols of wealth and status.

While I have not yet followed porcelain’s crossing of the Atlantic, it is the history explored here that forms the roots for the meaning and value of porcelain in the early United States.  In Part 2, hitting newsstands soon, porcelain will reach the New World and make its way through time and space to historic MSU, where fine porcelain ceramics met the needs of administrators at a Great Lakes institution.