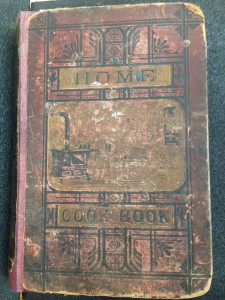 We are continuing our quest to chronicle historic campus cuisine, so I hope you are starving for more information. I have recently been exploring cookbooks from the latter half of the nineteenth century to get a feel for the kinds of recipes and dishes that my have been made and served in the early MSU boarding hall (ca. 1855-1870). The MSU Library Special Collections department is home to a vast array of rare and unique books, including the Cookery and Food Collection (https://www.lib.msu.edu/spc/collections/cookery/), which includes over 10,000 cookbooks. They also created Feeding America: The Historic American Cookbook Project (http://digital.lib.msu.edu/projects/cookbooks/), an online collection of some of the most important and influential American cookbooks from the late 18th to early 20th century.

It would be foolish of me not to take advantage of such wonderful resources right here on campus, so I jumped in. I decided to use the online cookbooks that were published during the MSU Early Period to get a feel for recipes and ingredients that were popular nationally at the time. Additionally, I visited Special Collections to inspect some unique regional and local cookbooks that were not digitized in order to get a feel for dishes common in the Midwest during the late 19th century. I paid special attention to recipes that included the ingredients I found while perusing the account books but also noted popular recipes that recurred in various cookbooks, since many ingredients may not have been itemized in the account books at the time of purchase. 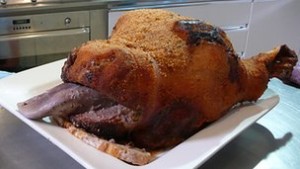 Roasted calf’s head – is thy hunger not whetted? Image source.

Most recipes in these books focused on cooking meats/poultry/fish, breads, pies, and cake, with some space devoted to vegetables and beverages. Recipes for beef, veal, mutton, were plenty, and all three meats are seen in the account books. There are fewer recipes for pork and ham, and they are also somewhat less common in the account books. Plenty of fish and oyster recipes were featured, and both appear on the boarding hall books (look for Mari’s upcoming blog on the apparent 19th-century obsession with oysters). There are plenty of chicken recipes featured, yet, oddly, chicken was not a common item purchased by the early campus boarding halls. The reason for this is unclear. In general, meat recipes were inclusive of ALL parts of the animal—roasted calf’s head, calf’s head soup, calf’s foot jelly, veal brains, beef tongue, liver, “brain balls,” and other delicacies were included in most cookbooks.

Nineteenth-century vegetable and salad recipes would seem a bit curious to the modern health-food fans. Veggie sections, as mentioned earlier, were usually shorter than other sections of nineteenth-century cookbooks, and included macaroni (yes, the pasta), rice, and baked beans. Other vegetables mentioned were mostly potatoes, root vegetables, and salsify, correlating closely with the vegetables purchased by the Agricultural College boarding hall. Salads were generally what I like to call “Midwestern salads”: light on the veggies, heavy on the mayo. Potato, chicken, and lobster salads dominated these sections, although occasionally “lettuce salad” made an appearance. 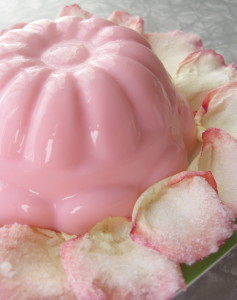 Desserts comprised, in some cases, almost half of the recipes in some of the books. A multitude of cakes and pies were listed, popular flavors including lemon, plum, ginger, and “cocoanut.” Cookies were usually listed in the “cakes” sections and included but one singular recipe, meaning that cookies were not the varied and popular treat they are today. Chocolate cake and other chocolate recipes were not common in the 1850s and 1860s, but become more visible towards the end of the century. “Puddings” at the time were not the sweet custard desserts we think of today, but were baked, boiled or steamed confections of a grain, a binder, and other various ingredients, that could be sweet or savory. Most cookbooks had substantial pudding sections. Other common desserts included blanc mange and Charlotte Russe, jelly and cake confections formed with molds.

Items that appeared in the cookbooks that were not seen often in the accounting books include chicken, rice, oats and lima beans (succotash was featured in most cook books). Perhaps these were purchased in bulk orders from butchers and grocers and never clearly itemized, or perhaps they were simply not incorporated into the daily cuisine on the early campus. 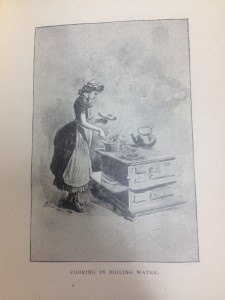 Illustration of boiling from Cookery in the Public Schools (1890). Image courtesy of MSU Special Collections.

Cuisine encompasses not only ingredients and food combinations, but also cooking techniques. While frying, baking, and broiling are often recommended, boiling is by far the most common cooking method featured in these recipes. Sally Joy White’s Cookery in the Public Schools (1890), an instructional book on the tenants of cooking, describes boiling as “one of the simplest ways of preparing meat” (p. 88). Recipes for boiled beef, ham, and even whole chickens and turkeys are numerous, and boiling is almost universally recommended for cooking vegetables.  It might be assumed that this method of cooking both meat and vegetables was employed by campus cooks to feed the large numbers of students and staff since efficiency may have been favored over flavor. However, dishes weren’t entirely devoid of spices—mace, nutmeg, allspice, clove, rose water, and sometimes even cayenne were common features of recipes.

Unsurprisingly, pickling food was also commonly suggested, since this would have been some of the best ways to preserve fruits and vegetables long-term during an era of limited refrigeration. From the traditional pickled cucumber to pickled peaches, pears, and even walnuts, pickling seemed very important and were undoubtedly a component of the early campus diet. 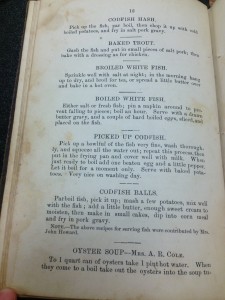 To get a sense of the local flavor, Michigan cookbooks, often assembled by churches, were only available only for later years, but were useful for insight into more everyday, regional and local cuisine since recipes were submitted by ladies of the church or organization. These include one from Port Huron from 1876, Des Moines, IA, from 1876, Chicago from 1877, Ann Arbor from 1887, and Lansing from ca. 1890. Cookbooks from Michigan included more recipes specific to whitefish, not surprising given the proximity to the Great Lakes. Grander, more complex recipes, such as calf’s head dishes, were not as common in these books, attributable to either the “everyday” nature of the cookbooks or to changing tastes over time. The Lansing cookbook was the only one to devote whole sections to croquettes and cheese, indicating local food preferences for fried foods and delicious dairy products.

The information found during my foray into historic cookbooks helps give us a sense of what the early MSU cooks were cooking, and what early students were eating. These recipes will also serve as a base for the meal recreation we are planning for the end of the semester, so stay tuned to find out what we will be making!

What the Baptist Brethren Eat, and How the Sisters Serve It, a variety of useful and reliable recipes compiled by the Ladies of the first Baptist Church, Port Huron, Mich. Times Company, Port Huron, 1876.

Home Cook Book, compiled from recipes contribute by ladies of Chicago and other cities and towns: originally published for the benefit of the Home for the Friendless, Chicago. J. Fred. Waggoney, Chicago, 1877.

The Jubilee Cookbook: A Collection of Tested Recipes, compiled by a Committee from the Ladies’ Aid Society of the Methodist Episcopal Church of Ann Arbor, Mich.