In Part 1, I introduced how porcelain is produced and its long history in Asia and Europe.  Today, after centuries of history, porcelain finally comes to the Americas (what a surprise!).  Porcelain first came to the Americas not long after it made its appearance in Europe in the 17th century.  By the late 1600’s, porcelain became part of the colonial machine, brought over as part of the trans-Atlantic trade by many European powers.  The demand for porcelain, like in Europe, was based in a desire to emulate the rich and powerful of European society.  Especially for colonists, who were often portrayed as unsophisticated, owning porcelain was a way for them to prove that they could afford to maintain a fashionable household.  It also helped to demonstrate that “they had risen beyond their colonial roots to achieve the status of sophisticated, cosmopolitan consumers of the 18th century” (Leath 1999:59).  In colonial Charleston, for example, some wealthy colonists owned as much as £200 sterling or more in porcelain, which is worth over $44,000 today.

By the mid to late 1700’s, Chinese porcelain began to decline in popularity.  By this time, European potters had perfected the production of porcelain and were able to produce it at a lower cost.  They also were able to situate their porcelain within current Western traditions of style and aesthetics, such as the rising neoclassical movement.  As access to porcelain had become more widespread, it also lost its favor with the European aristocracy.  It was no longer a treasure that only the extremely rich could afford, so the aristocracy found new ways to materially establish their social position.  Porcelain was now a sign of the upper middle-class, of those attempting to emulate the lifestyles of the rich and famous.

Instead of Chinese porcelain, European porcelain, such as that made by Josiah Wedgwood, became the desired dishware of the day.  Advances made by Wedgwood potters in both refining the materials needed and in mechanizing part of the manufacturing process helped to make Wedgwood ceramics a superior product that could be bought at a more affordable price.  During the 1770’s, while the colonies of North America were on the verge of revolution, potters in Philadelphia also began to make “true” porcelain.  Possibly produced by the short-lived American China Manufactory, porcelain was produced in the Americas in an attempt to become less reliant on imports from Europe. 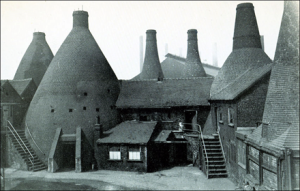 The use of porcelain continued into the post-Civil War Gilded Age, a time of industrialization and major economic growth in the United States.  During this time, the middle class was growing and people had more expendable wealth while, at the same time, certain items became less expensive, leading to consumerism as a method of demonstrating one’s social status.  Not only did the purchase and use of desirable objects demonstrate a person or family’s wealth, but it also provided physical evidence of their skill and taste in the decorative arts, another means by which people judged one’s level of class and sophistication.  While this conspicuous consumption of goods had taken place in the past, it reached rampant levels at this time and major portions of society took part.  Porcelain, both as dining wares and as displayable vases or figurines, played a large role in this social consumerism.

It was during the Gilded Age that MSU had its beginning.  For decades after the founding of the university, full-time faculty members lived on campus in homes built by the university on the north side of campus.  What would become known as Faculty Row originally consisted of 4 houses, but by 1899 it included 12 faculty houses and an apartment building for non-tenured professors.  In the late 1800’s, during the height of the Gilded Age, a number of faculty members lived in these buildings, just a short walk away from the dorms that housed their students.  Given this close proximity and the smaller number of students and faculty at that time, many faculty would entertain students at their home.  The Abbot’s especially entertained a number of students, often hosting regular receptions on Saturday nights and parties for special occasions.  Aside from students, other faculty, staff, and members of the local community also likely attended some of these functions.  Into the early 1900’s, faculty and staff continued to live on campus, both in Faculty Row and in other locations such as the Gunson/Bayha House farther south, but this would change as faculty began slowly moving into East Lansing at around this time. 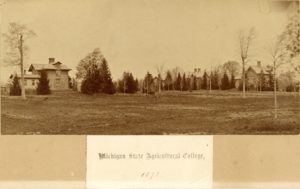 As faculty were the social entertainers of the campus area and were enmeshed in the middle-class ideals of the Gilded Age, it is no surprise that they followed some tenets of the United States new found consumerism.  While ceramics provided by the university for student use were affordable, undecorated stoneware, the faculty had more refined tastes.  This taste can be seen archaeologically, as porcelain and other elaborately decorated ceramics reach their peak during the time when faculty commonly lived on campus.  These ceramics would have been essential for entertaining within the fashions of the day, and they also helped establish the social class of the faculty.  As I have argued in past blog posts, mealtimes and other events were also believed to be learning opportunities for students, a way to teach them about proper behavior and decorum.  As such, it was important that these events be held in a proper environment stocked with fashionable and tasteful material culture that would guide the students in learning values appropriate for the middle class at that time. 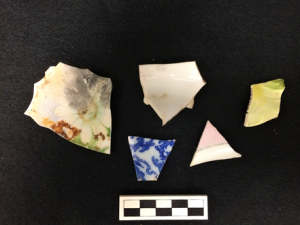 Assorted porcelain from the Gunson site.

Porcelain, while it had changed much over the centuries, continued to be a valued item.  From 13th century China all the way to 19th century MSU, porcelain influenced cultures across the globe and became a major part of people’s lives.  From its royal beginnings, porcelain traveled far and became a key aspect of the middle-class American culture that permeated the lives of students at early MSU.

2010   The Pilgrim Art: Cultures of Porcelain in World History.  University of California

1999   “After the Chinese Taste”: Chinese Export Porcelain and Chinoiserie Design in

2002   The Banality of Gilding: Innocuous Materiality and Transatlantic Consumption in the