In the 1800s, people loved oysters so much they wrote books on them. Courtesy of MSU Special Collections

As part of her research on historic campus cuisine, CAP Fellow Susan Kooiman visited the MSU Library’s Special Collections Department to peruse their collection of historic cookbooks. As you can (and should!) read about in her blog post, she came across several interesting recipes while looking through regional cookbooks for dishes popular in the Midwest during the late 19th century. Curiously, every cookbook she encountered seemed to include dozens of oyster recipes: fried oysters, broiled oysters, stewed oysters, escalloped oysters, fricasseed oysters, pickled oysters, oyster croquettes, oyster patties, oyster pie, oyster soup, oyster toast. Nineteenth century Americans apparently ate oysters with beefsteak, oysters stuffed in turkey, oysters with scrambled eggs, even oysters with frog legs and Parmesan cheese. If they could think of a way to prepare oysters, they tried it. By all accounts, during the 1800s America was swept up in the midst of a “great oyster craze” (1).

In this blog post, I address the question you never knew you needed answered: why were 19th century Americans so obsessed with oysters?

Today, oysters are a somewhat divisive subject. Some love them, some hate them, and some refuse to try them. No matter how you feel about them, the fact is that Americans have a long-standing history with oysters. Oyster shells recovered from middens—or trash pits—indicate Native Americans have been eating oysters for almost 9,000 years. In the United States, one of the largest oyster-producing bodies of water is Chesapeake Bay. Reefs of eastern oysters (Crassotrea virginica) once dominated the area so prominently, legend has it that early colonists nearly ran aground on them. When European colonists arrived in the 17th century, they began to harvest oysters from Chesapeake Bay at a voracious pace.

Until the 1800s, wild eastern oysters were typically harvested and eaten locally. Since oysters do not preserve long once out of their shells, oysters harvested from Chesapeake Bay rarely made it further than could be transported in a day. Nineteenth century advancements in food preservation and transportation transformed the oyster industry. Newly built railways connected the coast with inland cities and made it possible to ship oysters further west. Canning technology made its way to the U.S. in the early 1800s. By the 1840s, oyster canning became a booming business in coastal cities such as Baltimore. Canned oysters and fresh oysters packed in ice were shipped inland to Cincinnati, Cleveland, Detroit, Chicago, St. Louis, and other Midwest cities.

Innovations in harvesting allowed for more efficient collection of oysters. Historically, oysters were collected by hand or with special tongs . In the 1800s, however, fishermen began to use dredges, iron mesh bags that were dragged across the ocean floor to collect oysters too deep for tongs. From 1880 to 1910, oysters were harvested in massive quantities. During this time, as much as 160 million pounds of oyster meat was harvested per year. This intensive exploitation did irreparable environmental damage, but it did create an ample supply of oysters.

The fact that oysters were so abundant made them inexpensive, which only boosted their popularity. In 1909, oysters cost half as much as beef per pound. Oysters were used to add bulk to more expensive dishes such as meat pies. They were eaten at breakfast, lunch, and dinner, and by rich and poor alike. People even owned special plates for serving and eating oysters, shaped and painted like oyster shells. 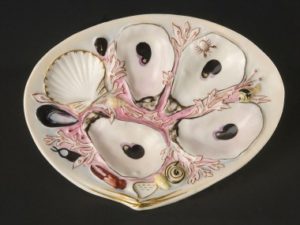 Because oysters were cheap, they were often served with alcohol at taverns and saloons. Essentially, oysters in the 19th century were served like burgers and fries today. Every town had its own establishment for serving oysters. Oyster parlors, oyster saloons, oyster lunchrooms, and oyster cellars lined the main streets of cities. These establishments became prominent and fashionable gathering places across the East Coast and Midwest.

The consumption of oysters was immensely trendy during this era. Americans could not get enough of them. As one 19th-century author raved,

“The oyster, when eaten moderately, is, without contradiction, a wholesome food, and one of the greatest delicacies in the world. It contains much nutritive substance, which is very digestive, and produces a peculiar charm and an inexplicable pleasure. After having eaten oysters we feel joyous, light, and agreeable—yes, one might say, fabulously well” (Murray, 1861:13).

We can only speculate on what he means by “inexplicable pleasure” and “fabulously well,” but who could resist such a fervent endorsement? 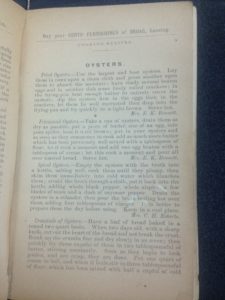 A page from a historical cookbook compiled in 1890 by St. Paul’s Guild of the Episcopal Church of Lansing, MI. Oyster recipes abounded. Courtesy of MSU Special Collections

Oysters were so popular and so ubiquitous that they were even eaten by students at MAC. As Susan found while looking through account books, canned oysters were purchased for students on occasion, including oysters and jelly at commencement, and 18 cans of oysters for students’ supper during the Week of Fires in 1871.

So, there we have our answer: 19th century Americans loved oysters because they were trendy, cheap, and readily available for questionable culinary experiments.

One factor affecting oyster popularity is that they are less abundant and more expensive now than they were historically. A combination of overharvesting and disease has depleted once-plentiful Atlantic oyster beds, decreasing the supply. Apart from reduced availability, public perception of oysters has also played a role in the oyster’s decline. At the turn of the century, the public began to take notice of the less-than-sanitary conditions in the oyster industry. In 1906, Congress passed the Pure Food and Drug Act, which required more stringent regulations for hygienic handling, packing, and shipping of food items. However, conforming to these new regulations raised costs so much that many oyster-packing houses went out of business.

Bad press was another factor. In 1924, typhoid outbreaks in Chicago were tied to oysters exposed to sewage pollution. After this event, demand for oysters fell between 50 and 80% across the country. The 1920s also brought Prohibition, which took its own toll on the oyster industry as the saloons and bars that once sold large quantities of oysters closed. Between the loss of these establishments and various health scares, oysters fell out of fashion and have never fully regained their former status.

As an oyster skeptic, I have mixed feelings about the prospect of oysters regaining the popularity they enjoyed in the 1800s. As for me, the next time I order bar food, I’ll take a bite of my burger and consider myself lucky I’m not slurping oysters between sips of beer.