Happy Fat Tuesday! After flocking to the nearest paczki-filled bakery, I hope that you sit down and enjoy your Polish donut on some fine china. Perhaps, if you’re historically or archaeologically inclined, you might want to enjoy your treat on a nice British ceramic plate. Enter: the Berlin Swirl pattern. 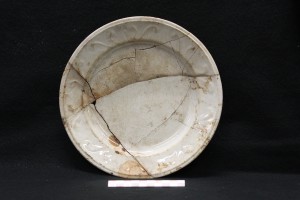 Here at CAP we’ve encountered the Berlin Swirl pattern in both the West Circle Privy, and the Saint’s Rest trash area.  Lisa Bright has researched the specifics of the Berlin Swirl fragments found in the historic privy on campus. The ceramics found in the privy are all characterized as institutional whiteware. The following is taken from Lisa’s summary of the privy assemblage from the forthcoming West Circle Privy Report:

“The Berlin Swirl pattern is characterized by a series of paired plumes following the rim of the plate, or around the body of cups.  Interestingly there are two different manufacturers of this plate represented; Mayer Brothers & Elliot, Mayer & Elliot, and Liddle Elliot & Son. Although the pattern was produced in a wide variety of  vessel types, the privy only contains dishes of varying size, and handless cups and sauces.  Plates were produced in dimensions from 6” to 10 ½”. The privy contained many ceramic fragments, but many of the ceramics could be reconstructed.  Of those with half or more of the vessel present include: 3 handless cups, 2 saucers (6” diameter), 1 small bowl (5.3” diameter), 1 small plate (6.3” diameter), 1 medium plate (7.5” diameter), and 2 large plates (9.5” diameter).

A Berlin Swirl plate bears a British registered design mark indicating a production date of December 18th, 1856; It was produced by Mayer Brothers & Elliot.  Mayer Brothers & Elliot produced ceramics under that name between 1855-1858.  They changed the name to simply Mayer & Elliot and continued production between 1858-1861.  In 1861 the        name was changed to Liddle Elliot & Son, which produced ceramics from 1862- 1869.  After 1869 the name was once again. This provides a narrow date range of 1855- 1869 for the production of the Berlin Swirl plates recovered from the privy.  There are additional illegible stamps on the base of the plates.”

We’re still in the midst of re-analyzing the ceramics from the trash pit, but it appears that additional Berlin Swirl forms may be present such as the soup tureen or tea set!

In the late 1800s, Americans were thought to favor “plain white vessels with comparatively unobtrusive molded decoration” (Lawrence and Davies 2010:304). By contrast, countries within the British Empire chose transfer prints with bright colors over the whiteware of their American counterparts (Lawrence and Davies 2010). By the 1840s, the first “Berlin Ironstone” appears under the maker’s mark T.J. & J.Mayer. This article provides a brief history of the progression of this style leading up to the Berlin Swirl pattern found on campus. The embossed style and edging of the Berlin Swirl pattern illustrates the craftsmanship involved in the molding of these pieces. One researcher even hypothesized that the stylistic curvature of the mold, in addition to the tall jugs and posts with paneling, may have been designed by persons involved with some familiarity with architecture. 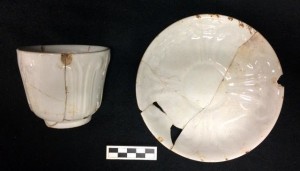 The Civil War disrupted the trade of British-manufactured ceramic wares to the American market and Brooks (2005) has hypothesized that the rise in exports of white Berlin Swirl patterns to Australia is a response to the declining American demand. Archaeological excavations in Australia demonstrate that Berlin Swirl is found at various sites during the American Civil War (Lawrence and Davies 2010). The Berlin Swirl pattern is noted in a volume with a title that really says it all, “Good Taste, Fashion, and Luxury: A Genteel Melbourne Family and Their Rubbish” (2014), a detailed review of a wealthy family with a large collection of ceramics. Clearly, the Berlin Swirl was considered desirable enough to make it to the dinner table of a wealthy Australian family. However, the pattern also occurs at sites associated with decidedly lower class families. The Museums Victoria Collections has a wonderful review of the archaeology of the “Little Lon” working class district, a poor mid to late 19th century neighborhood in Melbourne, where many lower income and transient individuals took up residence. Fragments of Berlin Swirl ceramics were found during an excavation in the late 1980s but, interestingly, many of the ceramic pieces feature patterns or designs that are flawed in some way. Perhaps the rejected wares not suitable for sale to the American market were making their way to the working class neighborhoods in Australia. 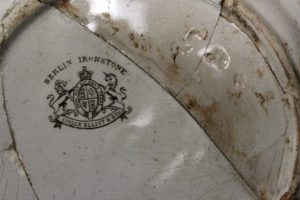 The maker’s marks on the bases of the Berlin Swirl fragments in the privy provide tight date ranges for deposition and use. While researching this blog, I was reminded of how powerful maker’s marks are for historical archaeologists, not just in terms of dating but also in thinking about trade relationships around the globe. The Australian examples from both high and low income neighborhoods also remind us that ceramics can speak to aesthetic choice/selection as related to social class. I found it interesting that the working class neighborhoods were incorporating elegant china into their households likely as a result of a decline in the American market due to the Civil War! Archaeological analysis proves, yet again, the interconnectedness of consumer demand for products, status-related items, and increasingly global economies.