I am a Midwestern stereotype: I grew up on a dairy farm in Wisconsin. We sold our milk to a creamery in the Cheese Curd Capital of the World (Ellsworth, WI). Milk runs through my veins. I admire my vegan friends for their ability to resist the creamy deliciousness of cheese, ice cream, and yogurt, without which I would languish in despair. As you can guess, my interest in anything dairy-related is rather high.

Therefore I was delighted upon my arrival in East Lansing to discover the MSU Dairy Store. Most of you who have spent any time at MSU are familiar with the delicious flavors of the ice cream and cheese produced here on campus. Since we are in the middle of project documenting early foodways of the college, I thought it would be fun to explore a topic integral to both my personal history and the agricultural origins of MSU. This first in a series of two blogs about the history of MSU dairying will chronicle dairy production and manufacturing on campus. 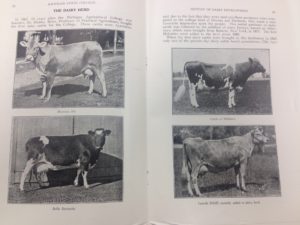 In the earliest days of the College, the only cows on campus were kept by the families of the professors. Frank S. Kedzie, a former MSC president, was the son of one of the first professors, recalls that his mother made the first cheese on the campus grounds (UA 17.107, Folder 1, Box 2411). In 1867, Dr. Manley Miles, Professor of Practical Agriculture, bought the first dairy cattle for the college, which were Ayrshires. Jerseys were added to the herd in 1871, and the first Holsteins, the black and white standard dairy cattle, arrived in 1880 (Anthony 192: 12-13). Brown Swiss and Guernseys were slowly added into the mix, as well. We know from the early account books that the boarding halls were acquiring milk from the early herds of the  Farm Department by 1871, if not before. The first dedicated Dairy Barn was built in 1900 and held 100 cows. A new barn was constructed in 1929, which could house almost 150 heads of cattle and contained the most up-to-date equipment of that time (Anthony 1929:19). While updates were part of the reason for this move, another reason was disease. Tuberculosis wiped out most of the herd in 1904 (Anderson 1929), and contagious disease continued to plague the herd in the decades after. Those in charge of the dairy hoped the move to a new, sanitary location would break the disease cycle (Anthony 1929:16).

The first building containing a plant dedicated to dairy manufacturing was constructed in 1913. Known as the Dairy Building, it was located on the north end of Farm Lane and cost $55,000 (Anthony 1929:16). It contained a well-equipped creamery for the practical training of the students. The original Dairy Store was opened in this building, although the exact date of this event is unknown. 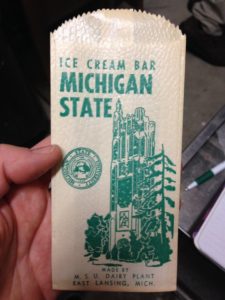 The Dairy Department and Plant remained in the Dairy Building until 1954, when Anthony Hall was constructed. Letters from the Michigan Agricultural Conference (1948), Michigan Purebred Dairy Cattle Association (1950) and Michigan Livestock Improvement Association (1952) to the state complained about the poor facilities and outdated equipment of the Dairy Building plant and called for improved agricultural, livestock, and dairy facilities at MSC (UA 16.37, Box 521, Folder 8). Following the construction of Anthony Hall—which was named after Ernest L. Anthony, the former head of the Dairy Department—the new dairy plant was highly productive. They provided milk to all of the residence halls, and made products such as chocolate milk, cream, half-and-half, sour cream, cottage cheese, buttermilk, dry milk, butter, and, of course, cheese and ice cream (including ice cream bars). 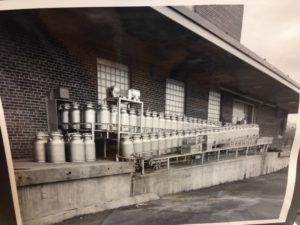 Dr. John Partridge, an emeritus faculty member of both the Dept. of Food Science and Nutrition and the Dept. of Animal Science, could be considered the Oral Historian of dairying on campus. He showed me and Lisa, our Campus Archaeologist, his stash of old dairying equipment, packaging, and photos from the mid-century era of the Dairy Plant. It provided us insight into the type of things we might encounter during our archaeological investigations on campus, such as historic milk bottles, bottle crates, and milk cans.

According to Partridge, the high level of productivity during the 1960’s become a point of contention with local private dairies, who did not feel it was fair that the MSU Dairy should have a monopoly on the campus milk market. Therefore, the dairy plant closed in 1968. In the meantime, local dairies found out how difficult it was to handle the fluctuating demands for milk of a college campus, and the dairy plant opened up again in the early 1970s. After this time the plant ceased to distribute fluid milk. The plant was gutted in the early 1990s and refitted with updated equipment. 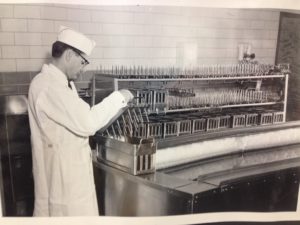 John Engstrom, the Dairy Complex Manager, kindly gave Dr. Goldstein and several CAP fellows (myself included) a tour of the dairy plant in early February. The facilities are spacious, shiny, and clean, and we saw the production of the curd for cheeses take place, which thrilled this Cheesehead. Some of those curds were bagged and sold the following day in that form, while the others were packaged into box forms to be pressed and aged and sold as various kinds of block cheese later on. The Dairy Plant currently focuses on producing shelf-stable cheese and ice cream. They produce 40,000 gallons in 40 different flavors of ice cream each year and 40,000 lbs of cheese in 11 different types or flavors. The milk is supplied by the 180 cows milked on campus in the Dairy Teaching and Resource center, as well as those milked in the Pasture Dairy center in the Kellogg Biological Station (although cream is acquired from another source). The MSU Dairy Store is both locally and nationally renowned, and you can even order their products online here. 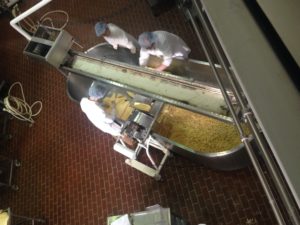 While the long history of diary production and manufacturing on the Michigan State Campus is intriguing, the role of dairy in our institution extends far beyond just the delicious output of the Dairy Store. Part II of this series will explore the illustrious history of diary research and education and MSU, so stay tuned!