Dalton Conley is the Henry Putnam University Professor of Sociology at Princeton University. He is unique in having earned a second PhD in behavior genetics after his first in Sociology.

In the talk and paper below he discusses molecular genetic tests of three hypotheses from Herrnstein and Murray’s The Bell Curve: Intelligence and Class Structure in American Life. This much vilified book is indeed about intelligence and class structure, but almost entirely not about race. Racial differences in intelligence are only discussed in one chapter, and the authors do not make strong claims as to whether the causes for these differences are genetic or environmental. (They do leave open the possibility of a genetic cause for part of the gap, which has led to all kinds of trouble for the surviving author, Charles Murray.) The three questions addressed by Dalton do not involve race.

Harvard professor Harvey Mansfield organized a panel to commemorate the 20th anniversary of The Bell Curve back in 2014. You can find the video here.

1. How is it that the “core propositions” of The Bell Curve can be discussed in a paper published in Sociological Science and at an advanced seminar at Princeton, but Charles Murray is not allowed to speak at Middlebury College?

2. There must be many social scientists or academics in the humanities (or undergraduates at Middlebury) with strong opinions about The Bell Curve, despite never having read it, and despite having a completely erroneous understanding of what the book is about. If you are one of these people, shouldn’t you feel embarrassed or ashamed?

In 1994, the publication of Herrnstein’s and Murray’s The Bell Curve resulted in a social science maelstrom of responses. In the present study, we argue that Herrnstein’s and Murray’s assertions were made prematurely, on their own terms, given the lack of data available to test the role of genotype in the dynamics of achievement and attainment in U.S. society. Today, however, the scientific community has access to at least one dataset that is nationally representative and has genome-wide molecular markers. We deploy those data from the Health and Retirement Study in order to test the core series of propositions offered by Herrnstein and Murray in 1994. First, we ask whether the effect of genotype is increasing in predictive power across birth cohorts in the middle twentieth century. Second, we ask whether assortative mating on relevant genotypes is increasing across the same time period. Finally, we ask whether educational genotypes are increasingly predictive of fertility (number ever born [NEB]) in tandem with the rising (negative) association of educational outcomes and NEB. The answers to these questions are mostly no; while molecular genetic markers can predict educational attainment, we find little evidence for the proposition that we are becoming increasingly genetically stratified.

While I find the work described above to be commendable (i.e., it foreshadows how molecular genetic methods will eventually address even the most complex and controversial topics in social science), I don’t feel that the conclusions reached are beyond question. For example, see this worthwhile comment at the journal web page:

This is a fascinating study! My comments below pertain to Proposition #1, that “The effect of genetic endowment is increasing over time with the rise of a meritocratic society”.

The data reported here do not seem to unequivocally contravene H&M’s hypothesis. The authors focus on the interaction terms, PGS x Birth Year (i.e. cohort), and show that interaction coefficient is slightly negative (b=-0.006, p=0.47), indicating a weakening of the association between genetic endowment and educational attainment, broadly conceived. The finding is that PGSs (polygenic scores) are (slightly) less predictive of educational attainment in later cohorts.

This isn’t that surprising, given educational inflation – over time, higher percentages of the population achieve any given level of educational attainment. In addition, as shown in Table 3 and mentioned in the Discussion section, this decline in importance of genetic endowment is restricted only to the ‘lower half of the educational distribution’. In contrast, genetic endowment (measured by PGSs) has become even more important across cohorts in predicting the ‘transition from a completed college degree to graduate education’ (534). Isn’t this what we’d expect to happen as the level of educational attainment at the lower half of the distribution becomes increasingly decoupled from cognitive ability?

Regarding fertility and dysgenic trends, see this more recent paper from the DeCode collaboration in Iceland, which reaches much stronger conclusions in agreement with H&M.

See also Conley’s new book Genome Factor: What the Social Genomics Revolution Reveals about Ourselves, Our History, and the Future. 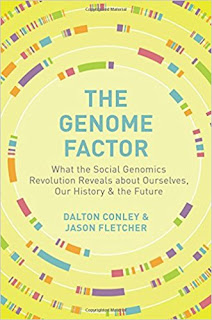