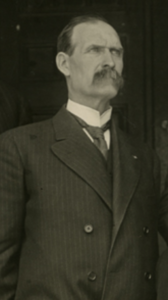 During this semester, I have been working through some of the decorated ceramics that were found in the Gunson assemblage (Find more information about the excavation here). Working toward the goal of generating a better picture of what types of vessels were found and the number of different stylistic types, I have been working on refitting the many decorated sherds that were found in this particular assemblage.  Finally, I am nearing the end and am ready to present some of the results.  But first, a bit of background.

Excavated in the summer of 2015 by a Campus Archaeology field school, this assemblage is one of the largest that CAP has ever excavated.  Thousands of artifacts were found, ranging from ceramics to glassware, building materials, lab equipment, and a number of more personal items.  Dating to the 1890’s thru the 1920’s, this assemblage is likely associated with the home of Thomas Gunson and his family, who lived on campus near this location.  Of the many ceramic sherds recovered, most were plain whitewares, but some were decorated in many ways.  A number of sherds had the thin green bands typical of industrial wares.  Other, more delicate pieces, were plain whitewares with embossed rims or were whiteware or porcelain dishes with various colorful decorative motifs.  For this project, I focused only those sherds with colorful decorative motifs. 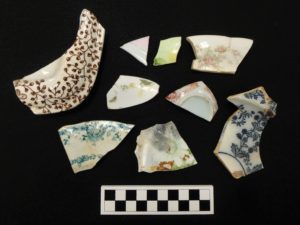 Between the 100-200 sherds examined for this project, 56 different decorative designs were present.  Few designs were repeated on more than one dish.  While many different designs were represented, they fit into only a few different general categories.  The vast majority of designs consisted of various types of floral patterns, while a few vessels contained geometric motifs, different everyday scenes, or were abstract designs formed by blocks or bands of color.  These different designs were executed in a myriad of colors.  While many were common blue-on-white or grey-on-white color schemes, many were multicolored, including tones of green, pink, yellow, blue, red, orange, or even black.  Many dishes also had gold leaf/gilding present, either composing the entire design or as an accent on the edge of the vessel’s rim. 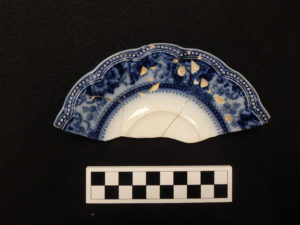 Of the many vessels represented in this assemblage, the vast majority were teacups, saucers, small plates, or fragments of serving dishes.  Only a couple of the plates are large enough to be considered dinner plates.  Based on their decorations, sizes, and vessel types, these dishes were clearly meant for entertaining, functioning as serving wares for drinks and light refreshments.  In this context, they also would have been the dishes most likely to be broken. 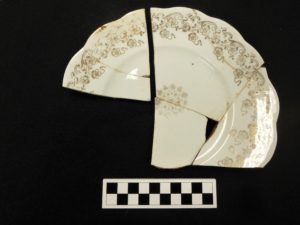 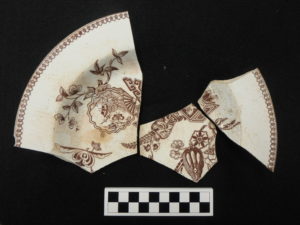 In doing some archival research into Gunson’s background, it became a little clearer as to why his family may have owned and used so many different dishes for entertaining.  Over his nearly 5 decades of service at MSU, Thomas Gunson, or “Uncle Tommy” as students would often call him, was a beloved part of campus life and frequently engaged with students, alumni, and local residents.  According to small articles written about him in the M.A.C. Record, he was an outgoing individual with a flair for fashion and life, enjoying his time with students and others on campus.  He was typically very well dressed, and his family home served as “a cosmopolitan haven for undergraduates and graduates alike” (M.A.C. Record vol. 46, no. 2, 1941).  He was so well liked that he was considered by many to be a campus institution and returning alumni would often seek him out in order to reconnect with one of their favorite faculty members.  As such a gregarious and fashionable man, it is not surprising that his home would be stocked with quality ceramics for entertaining his many visitors, with an emphasis on tea or other drinks that could be served during short social calls.  If only, on a chilly day like this, we could go back in time and join Uncle Tommy for a cup of tea.