There’s been some hoopla about cuts to Meals on Wheels in the proposed Trump budget.   The argument, such as there is one, seems to be that states should decide whether or not to fund a program that according to Mick Mulvaney sounds good, but doesn’t work. 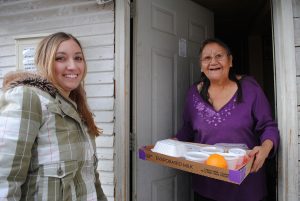 Overall, the budget is unclear so how much will ultimately be cut and through which avenues of funding is murky, but Meals on Wheels has become a symbol.  It’s a program that helps millions of people. It’s about more than meals.  It depends heavily on volunteers.  The federal funds that are provided gives local communities leverage to raise more money and make a real difference. It’s an example of how federal funding is not just about the dollars, but about federal, state, and local partnerships to make life better for people.

Mulvaney’s offhand remark about how programs like this don’t work is just another demonstration of how this administration really doesn’t understand the real world and the real effects their decisions have on real people.  Or that they just don’t care.

Here is some data.

Here’s a nugget that I found particularly striking.  For 60% of those 2.4 million people, one of those home delivered meals provides half or more of all of their food for the day.

Just stop and think about that for a minute.  That’s a large group of older adults who are surviving on very little food.

And it’s pretty clear that Meals on Wheels provides more than just food.

A 2012 study of 626 older adults at 8 sites in Texas, Florida, Georgia, North Carolina, New Jersey, and Rhode Island shows just what an important service Meals on Wheels is.

Participants who were on a waitlist were randomized into three groups.  One group received hot meals daily, another group received a weekly delivery of frozen meals (one potential way to cut costs), and a third group remained on the waitlist for the 15 weeks of the study.  The participants and the people who delivered their meals were surveyed at the beginning of the study and again at the end.

Here is some of what they learned.

In the grand scheme of things, Meals on Wheels and other community-based programs don’t cost much given the amazing services they provide.

It’s time to speak up.  Let our representatives know that this is not okay.

Find a town hall near you.