So far this year, I have been examining the ceramics from various assemblages associated with early Michigan State.  While I have looked at what types of dishes were present and how they were used, I have not looked at how these assemblages compare to other sites in the Midwest.  Comparative analyses are one of the most powerful tools that archaeologists use to learn about the past.  Not only are they great for looking at similarities and differences between sites and people, but they can also be used to look at larger social and economic processes, such as the intersection of class and wealth, that go into the choices made by people.  Here, I will compare the tableware assemblages from historic MSU with those from various contemporary sites in the Midwest as a way to better understand the different choices made in terms of purchasing and the rationale behind them.

At MSU, the majority of the dishes that we find from MSU are inexpensive plain or embossed/molded whitewares and plain or simply decorated industrial wares.  These are typically associated with dorms and student life on campus, and were purchased by the university for everyday student use in dining halls.  Much more elaborate and expensive ceramics, decorated in many patterns and colors, are associated with faculty houses on campus, which were likely purchased by the faculty using their own funds. 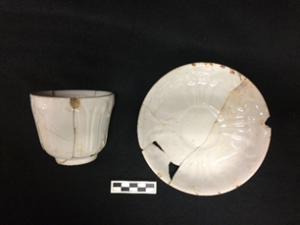 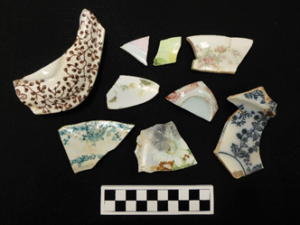 Ceramic assemblages are somewhat similar at other sites.  At the Woodhams site, an urban farmstead in Plainwell, MI owned by families of modest means, there were about twice as many undecorated whitewares as decorated whitewares.  While not common, decorated vessels were relatively expensive transfer printed and decalomania dishes (Rotman and Nassaney 1997).  In the former Corktown neighborhood of Detroit, the home of working class immigrant families, people relied heavily on mass-produced whiteware vessels that were cheap and easily accessible through local merchants.  Despite this, some more expensive wares were also present, such as porcelain teaware, English transfer printed dishes, and other imported decorated vessels.  Interestingly, the homes in the area all differed in the types of dishes, wares, and styles that they bought, highlighting the greater selection available to those dwelling in a growing city and consequently the greater ability to differentiate oneself through decorative style (Ryzewski 2015).  At the Clemens farmstead in Darke County, Ohio, the home of wealthy free African Americans, 81% of the tableware were plain whitewares, while the rest of the assemblage was made up of a small number of hand painted or transfer printed vessels.  While this family had enough money to buy expensive dishware, they chose to be conservative with consumer goods while broadcasting their wealth through architecture and improvements to their land (Groover and Wolford 2013).  For those who lived in the Moore-Youse House in Muncie, Indiana, a middle-class family influenced by Victorian ideals and class consciousness, the possession of decorated and expensive tableware was more important.  Out of all of the tableware recovered, most was whiteware and ironstone, and 48% of it was hand painted.  Out of the other decorated vessels, 44% were transfer printed ceramics.  While porcelain was not present, the high number of decorated ceramics suggest that this family spent a considerable amount of money in order to have fashionable tablewares that demonstrated their social class (Groover and Hogue 2014). 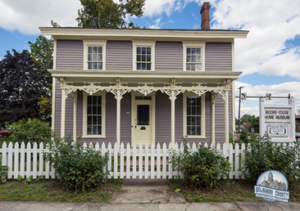 While these different homes are similar to MSU in the types of ceramics that are found, they represent very different choices and needs.  For individuals and families, their decisions in what tablewares to purchase are often based on cost, personal style, and the ways in which they wished to demonstrate their social standing within the Victorian world.  For example, the Clemens family chose to use simple ceramics while improving their home and the grounds, making it one of the few examples of expensive Victorian architecture in the region and a clear statement of their social standing to all who passed by.  At the Moore-Youse house, the family chose to purchase more expensive and fashionable tableware, which would have displayed their standing to those who were invited into the home.  Some of these same concerns are reflected at MSU, such as in the delicate and expensive tablewares sometimes purchased and used by faculty living on campus, but we also must consider the institutional context that is much different than the homes discussed above.  At early MSU, the university needed a large number of dishes to supply their student body, as well as dishes that were durable and would survive abuse by students on a daily basis.  Faculty may have needed more dishware as well, as some of them often entertained groups of students and visitors during the academic year.  On campus, one needed to consider such factors as durability, the economics of supplying and entertaining a lot of people daily, and having dish sets that were similar so as not to alienate certain divisions of the student body.  Both MSU and different homes in the Midwest had access to similar ceramics, but made choices based on different needs, so we must take this into account and interpret ceramics from campus using a different mindset and theoretical base. Only using economic scaling models, as is often done with ceramic assemblages from homes, misses many of the more nuanced aspects of ceramic selection that takes place at an institution such as Michigan State.

Groover, Mark D., and Tyler J. Wolford
2013   The Archaeology of Rural Affluence and Landscape Change at the Clemens Farmstead.

Ryzewski, Krysta
2015   No Home for the “Ordinary Gamut”: A Historical Archaeology of Community Displacement and the Creation of Detroit, City Beautiful.  Journal of Social Archaeology 15(3):408-431.