Recently a supervisor from landscape services contacted us after they uncovered an artifact. During the last big wind storm approximately 20 tree were badly damaged. One of the uprooted trees was located on the east side of Cowles House, and the crew discovered an old ammunition casing under the tree’s root ball. So what can this ammunition casing tell us?

So now we’ve figured out the caliber of the ammunition, but who made the bullet? Thankfully, similar to ceramic makers marks or registered designs, ammunition cartridges have identifying marks on the headstamp.

These markings usually contain information on the caliber and manufacturer of the cartridge, and if it’s military ammunition the date of manufacture. This headstamp reads “F A 7 11”. 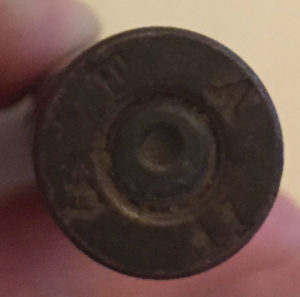 The F A stands for Frankford Arsenal. This ammunition plant opened in 1816 and was the main U.S. military small-arms ammunition producer until 1977. Ammunition produced prior to World War I at this plant was dated with a numerical month-year, so the 7 11 indicates a production date of July 1911.

CAP has found ammo casings and shells at various locations across north campus, so the find didn’t surprise us. But you might be thinking, why do we commonly find evidence of ammunition, specifically military ammunition, on campus? The answer is fairly straightforward; historically there was a military presence on campus. 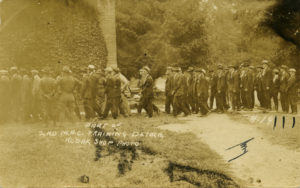 In the 1800s there were military training classes offered (in 1863 a Military Department was organized and many Michigan State students and faculty served in the Civil War), and small arms & artillery were stored on campus. By the 20th century there was also an active R.O.T.C. contingent, and during WWI a student army training corp in addition to enlisted soldiers training on campus. 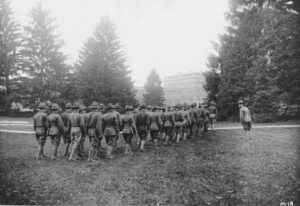 After the collapse of College Hall in 1918 the surviving corner of the building was incorporated into an artillery shed/garage. The artillery shed was used to house military vehicles and ammunition. Beaumont Tower now occupies this space (and the money was donated by Beaumont to build this after he visited campus and was angered by the artillery garage replacing what was College Hall) and this location is not far from Cowles House, where the casing was recovered. 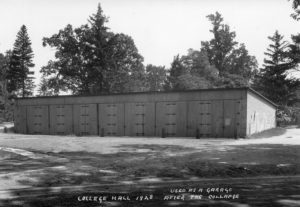 The ammunition was likely used within 10-15 years of the production date. Modern factory produced ammunition, when stored properly, is good for approximately 10 years. We will never know under what specific circumstances this rifle was fired on campus, but it’s presence is part of a long military connection.