As I’m sure any of our regular readers are aware, CAP has been looking into the foodways of the early MSU campus this year.  Our ultimate goals for the project were to create a website documenting early foodways on campus, and to recreate an 1860’s MSU-inspired meal based on archaeological and archival research. Autumn is almost ready to launch our website, and our meal recreation is this Thursday, April 27!

​MSU Culinary Services will be preparing the lovely meal for us.

We have worked closely with Chef Kurt Kwiatkowski and Chef Jay Makowski of MSU Culinary Services and Cindy Baswell of MSU Bakers to create a historic menu fit for a king… or maybe just a nineteenth-century college student. In any case, I believe this will be a delightful treat.

Here is the menu, with explanations as to why each dish was chosen: 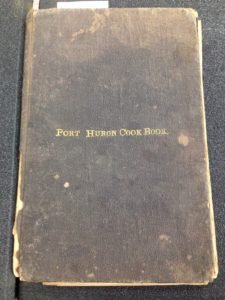 While we have no evidence that anyone ever made codfish balls on the early college campus, codfish was purchased by the boarding halls in the 1860s. A church cookbook from Port Huron, MI, lists this appetizing recipe:

“Parboil fish, pick it up; mash a few potatoes, mix well with the fish; add a little butter, enough sweet cream to moisten, then make in small cakes, dip into corn meal and fry in pork gravy.”

Basically, it is a fancy fish stick that will clog your arteries faster than you can say “I love Midwestern cuisine!” So naturally, we had to include it as our appetizer.

What initially inspired our meal recreation was the food remains found in a privy excavated on campus in 2015. Many fish bones were encountered, including walleye, a quintessential Midwestern fish. There is no mention of walleye in the boarding house account books, so this fish may have been caught locally rather than purchased.

Beef was purchased by the early college boarding halls and undoubtedly was a common item on their menu. A menu from 1884 (for the Class of ’86) lists both “pressed beef” and “beef tongue, spiced” on the menu. Both pressed beef and spiced beef are brined and cooked slowly, then pressed and served cold. Spiced beef has, well, more spices and presumably more flavor, and it is common in nineteenth-century cookbooks, so we selected that as our primary beef dish. Beef tongue is also frequently featured in historic cookbooks, and we threw it in there just to have a more oddball option that we can dare our guests (and ourselves) to try! 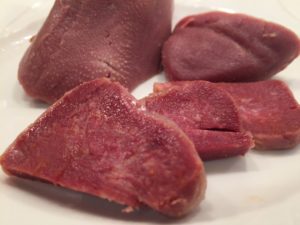 ​Beef tongue – you know you want to try it! Image source

Turkey was a special dish served at the Agricultural College. It was purchased seasonally for Thanksgiving and early students took part in hunting and feasting on wild turkeys as well. We have written much about oysters on our blog in the past, and so we felt we had to include them in our dinner. Since we felt we should adhere to the historic habit of consuming canned oysters, which sound wholly unappealing, we decided to incorporate them into a stuffing for the turkey. Together, the turkey and stuffing represent the “special occasion” dish for this meal.

Chow-chow is a popular vegetable relish in the nineteenth century, and it is still popular in parts of the South. Made with tomatoes, peppers, onions, as well as with other vegetables such as cabbage and cauliflower, it consists of foods that would have been easily grown in the college gardens. Chow-chow is also featured on the 1884 banquet menu, suggesting it was an important and common side on historic tables.

Potato croquettes are basically deep-fried mashed potato balls, so naturally we wanted to eat them. A cookbook from St. Paul’s Episcopal Church of Lansing (ca. 1890) had a whole section devoted to croquettes, suggesting their local popularity. Early campus boarding halls did sometimes purchase potatoes, but also grew their own, as student work logs record them “working in potatoes” and “hoeing potatoes and peas” in 1869.

Is this what we mean by “ginger cake”? Image source

It is apparent from nineteenth century cookbooks and banquet menus that cake was a popular dessert. And can you blame them? Cake is amazing. There is nothing in the MSU records specifically mentioning ginger cake, since specific recipes weren’t written down and specific spices were never recorded in the account books. In his diary, Edward Granger mentions stealing cakes from “downstairs” (presumably the kitchens) and eating ginger snaps at Christmas in 1859. Recipes for gingerbreads and cakes are abundant in historic cookbooks, meaning it was likely a common dessert at the time.

Our final dish will be Charlotte Russe. Nowhere is this fancy molded dessert of custard, gelatin, and cake mentioned in the MSU records but it is heavily featured in historic cookbooks, as are molded and gelatin desserts in general. Furthermore, an abundance of raspberry seeds were found in the historic privy on campus, so the raspberries will be incorporated into the meal in the Charlotte Russe.

Graham bread is just a fancy term for whole wheat bread. While today we consider whole wheat to be the healthiest and premium flour, in the past it was not considered as refined as bleached white flour. The early boarding halls purchased graham flour and undoubtedly made much of their bread and rolls using it. It may sound like a healthy component of our meal, but historic recipes often incorporate molasses into the bread. 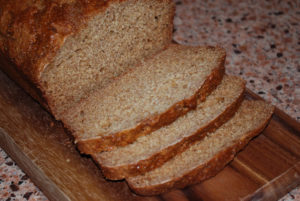 ​We will eat many grams of graham bread. Image source.

We are very much looking forward to our lovely meal on Thursday. Invitations have been sent out and we hope to have a wonderful time with guests from across the campus. Autumn will be writing a summary of the event, so look for that next week!

What the Baptist Brethren Eat, and How the Sisters Serve It, a variety of useful and reliable recipes compiled by the Ladies of the first Baptist Church, Port Huron, Mich. Times Company, Port Huron, 1876.