Today is the day! Campus Archaeology is throwing it way back with an 1860’s-inspired three-course meal. For my blog post this week, I thought I’d get into the spirit of historic food and drink with a little history—and some of my own, highly professional market research—on ginger beer. 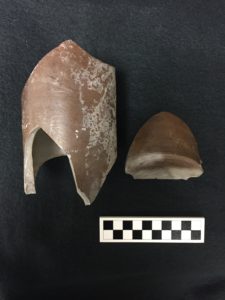 Archaeology provides a unique opportunity to look at the physical evidence of past consumption. At MSU, archival documents tell us the official records of what the school bought for students and faculty to eat and drink. However, we can learn about what people were actually consuming on campus by looking at the archaeological record of things they threw away. This is how we learned that at least one thing people drank was ginger beer, as evidenced by a stone ginger beer bottle excavated from Saints’ Rest dormitory in 2005.

Ginger beer was a popular drink in Britain and North America from the 18th century until Prohibition. Technically speaking, ginger beer is not a beer. Whereas the production of beer involves the fermentation of a grain (typically barley or wheat) malted to turn its starch into sugar, ginger beer involves the fermentation of ginger and added sugar, typically molasses or cane sugar. Ginger beer is more likely related to the ‘small beers’ popular in Europe from Medieval times until Industrialization. Before the advent of sodas and modern soft drinks, these weakly alcoholic, fermented beverages were typically brewed at home and provided a safer alternative to often-contaminated water.

Why make a ginger drink? Humans have been drinking ginger beverages for thousands of years, often for medicinal purposes. However, the history of ginger beer is tied to the cultural and economic importance of its two main ingredients, ginger and sugar. Ginger and sugarcane, crops native to tropical regions of South Asia, were introduced to Europe via the spice trade. Europeans brought these crops and others to the New World, where they flourished in the tropical climates of the Caribbean. Powered by the labor of enslaved Africans, French- and English-controlled Caribbean plantations became the world’s biggest sugarcane producers. By 1655, England also controlled Jamaica, the Caribbean’s most prolific producer of ginger, with over two million pounds exported to Europe each year. Jamaican ginger was considered especially flavorful and was a prized ingredient in ginger beer.

Apart from ginger and sugar, ginger beer has two other traditional ingredients: lemon, and a special microorganism that aids in fermentation. The microorganisms responsible for the fermentation in ginger beer are a symbiotic culture of bacteria and yeast (a SCOBY) known by the more innocuous name of “ginger beer plant.” A culture of ginger beer plant is added to sugar water flavored with ginger. These microorganisms ingest the sugars and produce carbon dioxide and low levels of alcohol as waste products. While today’s ginger beers are typically non-alcoholic, prior to the mid-19th century, ginger beer was up to 11% alcohol by volume. In 1855, British Parliament passed an act that imposed export taxes on beverages with an alcohol content above 2%. After this, most ginger beer brewers reduced the alcohol content in their products (via reduction of the fermentation time) in order to keep them affordable. 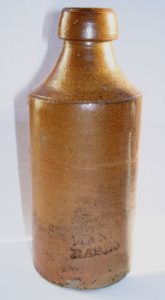 After it was brewed, ginger beer was corked inside stoneware bottles, like the one found at Saints’ Rest. Early stoneware bottles and those brewed locally in North America at were usually fairly plain, brown in color, and etched with the bottler’s name or city. The Saints’ Rest bottle seems to fit into this category. Beginning in the 1880s, however, sleeker gray bottles with colorful shoulder slips and stamped logos designed to attract consumer attention became more popular.

Part of the reason for packaging in stone rather than glass bottles was cosmetic: ginger beer was usually unattractively cloudy in appearance. However, packaging was also functionally important in the export of ginger beer. England shipped large amounts of ginger beer to the U.S. and Canada beginning in the 1790s through the 19th century. Though ginger beer was brewed regionally, England maintained market dominance in North America because English breweries used superior quality stoneware bottles that better maintained ginger beer’s effervescence and kept it cold. The bottles were sealed with liquid- and gas-tight Bristol Glaze and wired and corked shut to maintain carbon dioxide in solution. 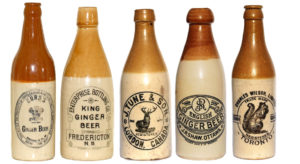 During Prohibition, ginger beer dipped in popularity in favor of its cousin, ginger ale, and other soft drinks. Unlike traditional ginger beer, ginger ale is made by adding ginger flavoring and sweetener to carbonated water and does not involve the addition of a microorganism. Today, the difference between ginger beer and ginger ale is much less clear. Many modern manufacturers use this abiotic process to make or enhance ginger beer, adding flavoring and carbonation without the use of a microorganism. For this reason, modern ginger beers differ from ginger ales primarily in flavor; they are typically spicier and less sweet than ginger ales.

All this research got me excited to try some ginger beers. Naturally, Campus Archaeologist Lisa Bright and I had to do our own taste test, you know, for science. We picked four brands of ginger beer that I hadn’t yet tried at stores near us: Regatta, Barritt’s, Q, and Bundaberg. We tasted each ginger beer alone and for science—and because #gradschool—we added vodka and lime to make some Moscow Mules. 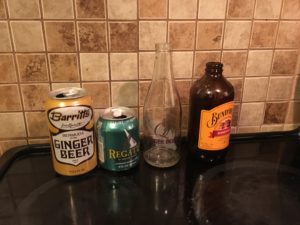 In no particular order, the first brand we tried was Regatta. It was spicy with a strong ginger flavor and made an enjoyable cocktail. Barritt’s was up next. This one was much less flavorful so it seemed disproportionally sweet, like a ginger ale. Third, we tried the Bundaberg. This was spicy and sweet and definitely enjoyable alone. Last, we tried Q ginger beer: spicy, very fizzy, but not at all sweet. According to the Q website, it is made with chili pepper and is specifically intended to be used as a mixer. Our highly scientific and definitive ranking put the Bundaberg in first place, Regatta in second, Q in close third, and Barritt’s in fourth.

If you have a favorite ginger beer, please tell us about it! We hope you open one up and think about early MSU students who might have enjoyed a ginger beer in their dorm after a long day of classes and farm work (although this was probably enjoyed in secret as alcohol was banned on campus).