15 states legislatures have term limits, but what does this mean? What are term limits supposed to do, and what observable effects do they have on government? This is the subject of the research I presented at the 2017 Michigan State University Undergraduate Research and Arts Forum. 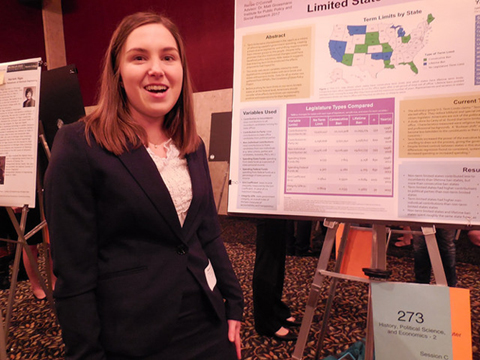 Term limits place a limit on the amount of time a person can serve in an elected office. The first legislative term limits were enacted in California, Colorado, and Oklahoma in 1990, and the last state to enact term legislative limits was Nebraska in 2000. The states that have enacted term limits span from east to west coast and have a range of political ideologies and population sizes. 36 states place term limits on their governor, but my research focused specifically on term limits in state legislatures.

The number of years a person can serve in term limited states varies from state to state and ranges from 8 total years in Nebraska to 24 total years in both Louisiana and Maine. There are two types of term limits, consecutive and lifetime.  With consecutive term limits, legislators must leave office after they have served a set amount of terms, and after a set amount of time out of office, legislators can run for that same office again. As for lifetime term limits, legislators can never run for that office again after they have served the maximum number of terms.

Term limits were championed in the 1990’s as a means of reforming wasteful government spending, creating a more diverse legislature, and shifting responsiveness from interest groups to the people. The advocacy group U.S. Term Limits claims, “Term limits provide fresh faces with fresh ideas to elected office. They reduce lobbyist and special interest influence and make room in Congress for the citizen legislator. Americans are sick of the political games and power politics.”1 Citizens and legislators voted for term limits with noble intentions, and they hoped for more effective governance and less wasteful legislatures.

Despite lofty promises that these institutional changes could have beneficial policy outcomes, little research suggests that enacting term limits produced the effects proponents had hoped for. A study done by Carey et al. found that term limits had no effect on the type of people elected to office. Characteristics measured were religious backgrounds, family income levels, age, ideology, and professional backgrounds. A “Burkean shift” was observed, whereby term-limited legislators become less beholden to the constituents in their geographical districts and more attentive to other concerns.2

My research investigated the current literature using data from The Correlates of State Policy Project by MSU’s Institute for Public Policy and Social Research. The Correlates is a collection of data for all 50 states ranging in time from 1900-1916 with over 900 variables. These variables represent policy outputs or political, social, or economic factors that may influence policy differences across the states. The variables I used in my study were contribution to incumbents, contribution to party, non-individual contributions, spending state funds, spending federal funds, Gini Coefficient, and integrity GPA. I grouped states into states without term limits, states with consecutive bans, and states with lifetime bans and then compared the variable averages for each group. Results of this comparison can be seen in Table 1. These results suggest that term limits do not produce the original desired effects and term limited states may fiscally fare worse than non-term limited states.

Understanding that correlation does not mean causation, it is nonetheless disconcerting that term limited states fared roughly on par or worse than non-term limited states.  Specific types of states might have more of a propensity for adopting term limits, but the original sweeping claims term limit proponents made do not hold much water decades out. Despite limited controls between states in this study, a study done in 2013 using a differences-in-differences regression found no consistent, systematic evidence that term limits significantly decreased spending or increased spending.5

During President Trump’s 2016 presidential campaign, he called for the United States to put term limits on their representatives and senators. In 1995, the Supreme Court case U.S. Term Limits, Inc. v. Thornton determined that Congress would need to pass a constitutional amendment before U.S. representatives and senators could be beholden to term limits. Although it is theoretically possible for Congress to approve a constitutional amendment and for three-fourths of the states to ratify the amendment, the likeliness of this happening soon is extremely low. Frankly, this movement does not have the political steam to gain the support of congress, let alone most of the state legislatures. Nonetheless, if we extrapolate the results of state-level term limits, we could expect less legislator competency, more interest group and lobby influence, and more power in the hands of President Trump.