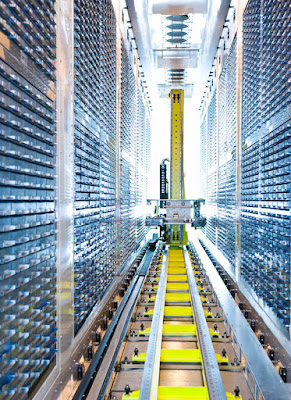 The Nature Genetics paper below made a big splash in today’s NYTimes: In ‘Enormous Success,’ Scientists Tie 52 Genes to Human Intelligence. The picture above is of a UK Biobank storage facility for blood (DNA) samples.

The results are not especially surprising to people who have been following the subject, but this is the largest sample of genomes and cognitive scores yet analyzed (~80k individuals). SSGAC has assembled a much larger dataset (~750k, soon to be over 1M; over 600 genome-wide significant SNP hits), but are working with a proxy phenotype for cognitive ability: years of education.

Intelligence is associated with important economic and health-related life outcomes1. Despite intelligence having substantial heritability2 (0.54) and a confirmed polygenic nature, initial genetic studies were mostly underpowered3, 4, 5. Here we report a meta-analysis for intelligence of 78,308 individuals. We identify 336 associated SNPs (METAL P < 5 × 10−8) in 18 genomic loci, of which 15 are new. Around half of the SNPs are located inside a gene, implicating 22 genes, of which 11 are new findings. Gene-based analyses identified an additional 30 genes (MAGMA P < 2.73 × 10−6), of which all but one had not been implicated previously. We show that the identified genes are predominantly expressed in brain tissue, and pathway analysis indicates the involvement of genes regulating cell development (MAGMA competitive P = 3.5 × 10−6). Despite the well-known difference in twin-based heratiblity2 for intelligence in childhood (0.45) and adulthood (0.80), we show substantial genetic correlation (rg = 0.89, LD score regression P = 5.4 × 10−29). These findings provide new insight into the genetic architecture of intelligence.

Perhaps the most interesting aspect of this study is the further evidence it provides that many (the vast majority?) of the hits discovered by SSGAC are indeed correlated with cognitive ability (as opposed to other traits such as Conscientiousness, which might influence educational attainment without affecting intelligence):

Carl Zimmer did a good job with the Times story. The basic ideas, that

are now supported by overwhelming scientific evidence. Nevertheless, they are and have been heavily contested by anti-Science ideologues.

For further discussion of points (0-3), see my article On the genetic architecture of intelligence and other quantitative traits.