The two figures below come from recent posts on climate change and AI. Please read them. 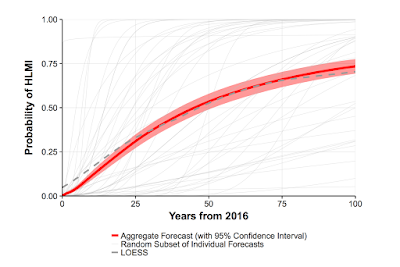 You can choose to believe in any of the grey curves in the AI graph because we really don’t know how long it will take to develop human level AI, and AI researchers are sort of rational scientists who grasp uncertainty and epistemic caution.

You cannot choose to believe in just any curve in a climate graph because if you pick the “wrong” curve (e.g., +1.5 degree Celsius sensitivity to a doubling of CO2, which is fairly benign, but within the range of IPCC predictions) then you are a climate denier who hates science, not to mention a bad person :-(