Millennials, defined by the Census Bureau as being born between 1982 and 2000,(link is external) are notorious for their love of urban living and all things that go along with it, from easy access to public transit to a wide array of employment opportunities. But does that stereotype hold in Michigan? Being the largest generation in American history,(link is external) public officials and realtors alike are naturally eager to understand where this massive demographic group wants to be, since their decisions will shape much of the economic and cultural future of the state.

Frequently finding its way into policy discussions across a variety of industries, this topic often arises following concerns over Michigan’s outbound migration and its effect on the state’s future workforce. With the largest and most educated(link is external) generation coming of age en masse, states are aiming to attract or at least retain these young workers. For a state that saw overall declines in the number of millennials living in cities after the Great Recession and still had the 6th highest population loss in the country in 2015(link is external), Michigan has struggled not only in attracting young workers, but in retaining ones already here.

Michigan saw a steady influx of people between 2009 and 2015, though larger numbers of people leaving yielded net negative overall migration each year. General trends show rates of population decline slowing despite a slight uptick in 2015. The age group most likely to leave the state were those under 26 years old, with those aged 26-34 the next most likely. 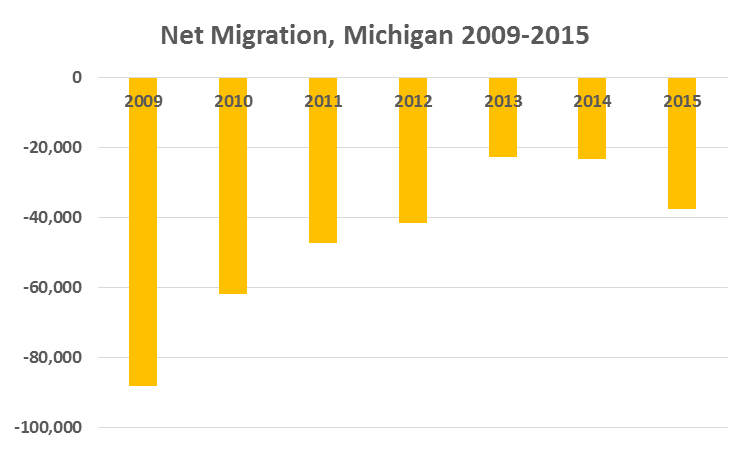 Within the state of Michigan, the idea of millennials as city-dwellers doesn’t hold for most in the 18-34 age group. In Michigan’s most populous cities (with a population of 75,000 or greater), including Ann Arbor, Detroit, Flint, Grand Rapids, Kalamazoo and Lansing, population data from the U.S. Census Bureau’s American Community Survey (ASC) show that less than 20 percent of the state’s millennial population resided within these city limits between 2009-2015.  In fact, the number of millennials living in Michigan cities slightly decreased over this time period, with much of it driven by declines in Detroit. 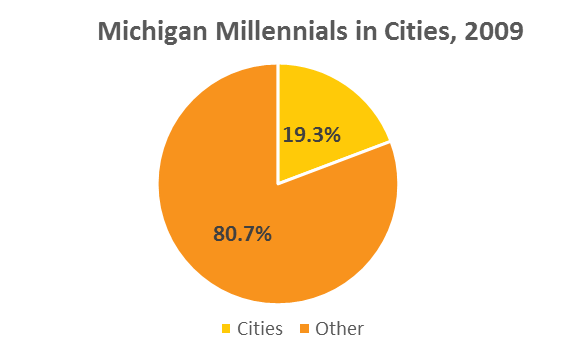 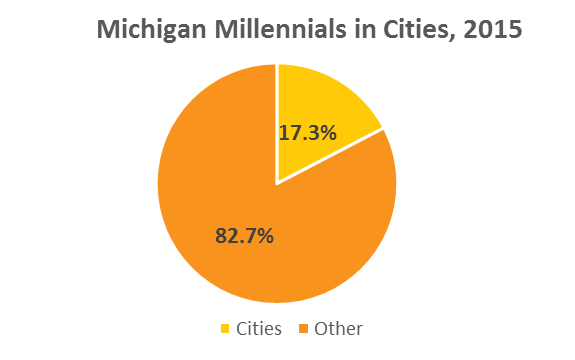 In spite of declining numbers of overall millennials living in Michigan cities, one sub-group of 18-34 year olds saw an increased presence over the same time period in these cities: those with a Bachelor’s degree or higher. The number of educated millennials living in one of Michigan’s six largest cities increased by 10.4% between 2009 and 2015, with wide variation depending on the city, though Detroit and Flint are the only two to see negative change. Despite a significantly smaller population as compared to Detroit, Ann Arbor and Grand Rapids hold the state’s largest share of educated millennials and experienced the most growth for this demographic group. Though still remaining below pre-2009 levels, Detroit continued to inch closer to recovering some of the population lost during the Great Recession. The number of educated millennials residing in Lansing, Kalamazoo, and Flint all remained relatively steady over this period, with slightly negative changes in Flint. 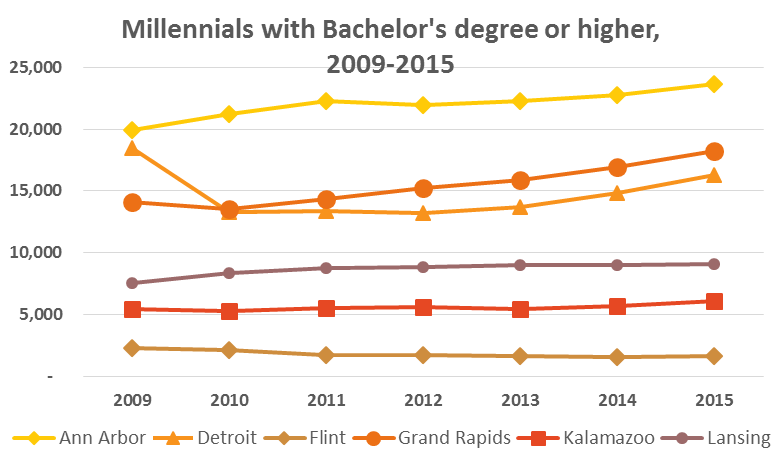 So how do these trends compare with what’s going on in the rest of the country? In the United States, around 30% of millennials lived in an urban area in 2013,(link is external) compared with Michigan’s 17.4% that same year. Though millennials were still more likely than other generations to live in urban areas, around 70% of 18-34 year olds nationally and over 80% statewide lived in either suburban or rural areas.

Some claim that millennials’ draw to urban living may be more of a passing phase than a permanent preference. Now that the largest cohort have just passed 25, researchers are anticipating that these ‘peak millennials’ are the beginning of a shift from cities to suburbs(link is external) as this generation increasingly moves into the traditional ages for home-buying and family life. Millennials in the older age cohorts will likely play a role in accelerating the shift, as those forced to delay these major life events due to a sluggish economy will result in some pent-up demand. Surveys from both Zillow and Harvard(link is external) found that a majority of millennials intend on purchasing homes in more affordable suburban areas in the future.

Others also argue that the presence of millennials in cities doesn’t necessarily indicate lasting preference, but is more a result of combined historical and generational factors;(link is external) namely, the sheer size and pattern of millennial births, the nature of the housing market, and the economic disruption that stagnated progress for many in this age group caused by the Great Recession. As these factors return to normal and the economy continues to stabilize, it’s expected that there will be slightly reduced concentrations of millennials in cities.

Though the notion of the urban millennial holds some truth, demographic evidence shows that this pattern is less dramatic than is often perceived. Population trends also indicate this to especially be the case in Michigan, where millennials are much less likely to be residing in a city. Smaller shares of millennials in Michigan’s cities relative to national rates could potentially be explained by a lack of major metropolitan areas with features that often draw young people in, like walkable cities and ample employment options. However, Ann Arbor and Grand Rapids saw significant increases in millennials with a Bachelor’s degree or higher, unsurprising as two of the strongest municipal economies in the state.

Policymakers hoping to keep these young workers can start to look further than cities in developing their long-term strategies for population retention and attraction efforts. While strong urban cores will likely continue to be an influential selling point to millennials, good schools and safe neighborhoods nearby will become increasingly important as more and more in this age group move into the next phase of life. In the end, the main takeaway may simply be that this generation isn’t all that different from those who came before it.