Prior to the modern era of genomics, it was claimed (without good evidence) that divergences between isolated human populations were almost entirely due to founder effects or genetic drift, and not due to differential selection caused by disparate local conditions. There is strong evidence now against this claim. Many of the differences between modern populations arose over relatively short timescales (e.g., ~10ky), due to natural selection.

Most of our understanding of the genetic basis of human adaptation is biased toward loci of large phenotypic effect. Genome wide association studies (GWAS) now enable the study of genetic adaptation in highly polygenic phenotypes. Here we test for polygenic adaptation among 187 world- wide human populations using polygenic scores constructed from GWAS of 34 complex traits. By comparing these polygenic scores to a null distribution under genetic drift, we identify strong signals of selection for a suite of anthropometric traits including height, infant head circumference (IHC), hip circumference (HIP) and waist-to-hip ratio (WHR), as well as type 2 diabetes (T2D). In addition to the known north-south gradient of polygenic height scores within Europe, we find that natural selection has contributed to a gradient of decreasing polygenic height scores from West to East across Eurasia, and that this gradient is consistent with selection on height in ancient populations who have contributed ancestry broadly across Eurasia. We find that the signal of selection on HIP can largely be explained as a correlated response to selection on height. However, our signals in IHC and WC/WHR cannot, suggesting a response to selection along multiple axes of body shape variation. Our observation that IHC, WC, and WHR polygenic scores follow a strong latitudinal cline in Western Eurasia support the role of natural selection in establishing Bergmann’s Rule in humans, and are consistent with thermoregulatory adaptation in response to latitudinal temperature variation.

… To explore whether patterns observed in the polygenic scores were caused by natural selection, we tested whether the observed distribution of polygenic scores across populations could plausibly have been generated under a neutral model of genetic drift …

The study of polygenic adaptation provides new avenues for the study of human evolution, and promises a synthesis of physical anthropology and human genetics. Here, we provide the first population genetic evidence for selected divergence in height polygenic scores among Asian populations. We also provide evidence of selected divergence in IHC and WHR polygenic scores within Europe and to a lesser extent Asia, and show that both hip and waist circumference have likely been influenced by correlated selection on height and waist-hip ratio. Finally, signals of divergence among Asian populations can be explained in terms of differential relatedness to Europeans, which suggests that much of the divergence we detect predates the major demographic events in the history of modern Eurasian populations, and represents differential inheritance from ancient populations which had already diverged at the time of admixture. … 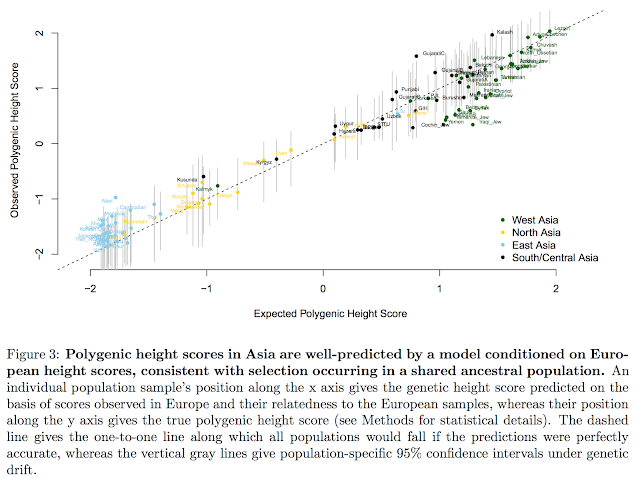