Dear Donald Trump. You are a great president. Probably one of the greatest this country has ever seen. You have the best mind for it, and the fake news media just don’t give you enough credit, which I think is really sad. But we are many, probably more than anybody realizes, that admire you and your accomplishments. You are doing a really great job, so keep up the good work. I have never been of any other opinion about your candidacy and presidency, and if anyone says otherwise, they’re lying. Trust me, as I trust you in everything.

I trust your judgment on political issues, and of course in all things business – the country should be run like a business. Here are a few things that I think if you fixed, as only you can, sooner rather than later, it would only further strengthen your reputation.

1) We both know that renewable energy is here to stay, and that it can employ a boatload of Americans. Show these idiots who don’t believe in you that you are the man to get this really going. You’d be rightfully remembered as the greatest president if you were the one to solve this problem. All you have to do is divert funds into this sector, and jobs will spring up everywhere.

2) Your political base consists of both the common worker – coal miners, factory workers, service people, you know, the real America – as well as Wall Street bankers, also known as the people who really run the country. Both have to be heard. But you already know what they both need, which is jobs, tax-cuts, and freedom to do whatever business they want. And we’ll get there, in time. You just have to lay the foundation, which counter-intuitively (only the smartest people like you really understand this) means to regulate Wall Street for the time being, and create jobs in renewable energy, infrastructure, etc.

3) Health-care: You ran on a promise to get everyone covered. And we know this is possible – every other developed country has done it. The challenge is to make it greater in America than anywhere else. I believe, I know, that you are the right person to do it. No one else can. Imagine the money American companies would save if they didn’t have to pay for their employees health care. Business would be booming! And you’d get all the credit for it. No one but Trump would smart enough to do this for American businesses. The increase in taxes would be nothing compared to what every person – your voters in particular – would benefit from access to universal health-care. We’ll call it TrumpCare, and your legacy would be safe in perpetuity. Means forever.

4) The military. The great news is that so much money could be saved by cutting down on military spending. America is already the greatest country in the world, spending more than all other nations combined on our military. But you are smart, and I know you are aware that lots of money are not spent in smart ways within the military. We can do better, we can be the strongest, and yet do it for less money (that can then be spent on creating jobs here at home) if we are smart about it. And no one is better suited to do this than you, which you have proven again and again. Keep it going!

That’s just a few of the big ones. Just imagine the legacy you would leave behind if you quickly fixed just these few things. People big and small would praise you to the skies, and the people who didn’t believe in you – like I always have – would be proven wrong yet again. Except this time they would have to admit that you are making American great again, as only a great man like yourself can. 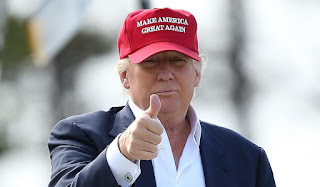